Corey Mintz: Who has a bigger crush on Canada’s dairy farmers, Justin Trudeau or Andrew Scheer? Let’s compare their love letters to milk. 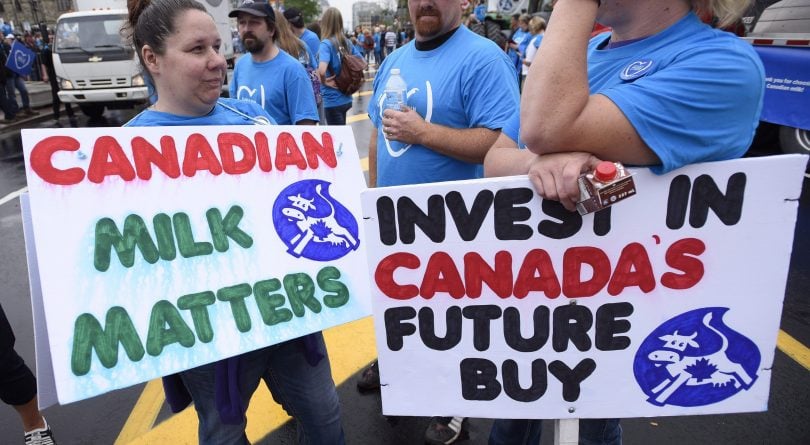 In July, speaking to a dairy industry audience, Andrew Scheer promised to review the recent edition of Canada’s Food Guide. He denounced the update, which no longer tells adults to drink two servings of milk a day, as flawed and biased, produced with a “complete lack of consultation.” Scheer further offered an anecdote about how “chocolate milk saved my son’s life.”

A few days ago, Justin Trudeau offered a payment of $1.75 billion over eight years, meant to compensate dairy producers for the new competition they face due to renegotiated trade deals that diminish Canada’s protectionist tariffs on dairy imports.

Trying to determine the sincerity of Trudeau and Scheer on this topic is like a “who-wore-it-best” scenario in which both celebrities are wearing an Ed Hardy t-shirt featuring an eagle biting a snake. Because it’s hard to believe a word out of either politician’s mouth.

We all understand the pressure of political candidates across the spectrum to stake out positions contrary to their opponents. So on any given day, Scheer needs to be opposite Trudeau. And sometimes that’s amusing, the same way DC Comics character Bizarro says everything backwards: good in place of bad; “Buy Bizarro bonds! Guaranteed to lose money for you!”

But as writers of Superman comics have learned, it’s easy to make jokes with Bizarro, but hard to tell stories. Because there is a limited narrative arc for a character who’s only defining characteristic is to be needlessly contrary. Engaging antagonists have plans to achieve goals, whether it’s power (Lex Luthor), knowledge (Metron), satiation (Galactus), revenge (Magneto), sacks of cash emblazoned with dollar signs (virtually all of Spider-Man’s villains), or reduction of carbon emissions (Thanos, sort of).

Similarly, it’s easy to point out the legitimate failings of any current administration and simply promise to undo their work. But it’s not the same as having a plan. As evidenced by Scheer’s climate position, described by Maclean’s columnist Paul Wells as “a pamphlet he could wave around and say, ‘I’ve got a real plan’.”

Not that Trudeau is anyone’s Superman. If he’s anyone in the Superverse, it’s Snapper Carr, a character created in 1960 to be a hip, young mascot for the Justice League of America. Snapper, intended to connect younger readers to older, legacy characters like Wonder Woman and The Flash, spoke like a beatnik teenager, as written by 50-year-old writer Gardner Fox. “I’m really swinging, casting orbs on you like this, Flash! Like I’m having a ‘happy-mare,’ you dig?” That dialogue sounds silly until you picture a half-dressed Trudeau popping in up random wedding photos.

MORE: The truth about dairy farming in Canada

But let’s put our toys aside for a moment and look at the substance of these two phonies.

One of the virtues of a post-Trump political landscape is that we don’t have to pretend that any of these bozos believe in the free-market system they’ve been promoting for the last four decades. None of the U.S. republicans who have long championed Milton Friedman’s philosophies—that regulations and tariffs are bad, and open markets solve everything—have voiced a word of objection to their president’s trigger-happy trade wars. And following Donald Trump’s series of threats and tariffs, the entirely predicted retaliations from trade partners has forced Trump to offer $16 billion in bailouts to farmers devastated by the evaporation of their export markets.

In Canada, the Comprehensive and Progressive Agreement for Trans-Pacific Partnership (CPTPP) has allowed the import of dairy, eggs and poultry. And the United States-Mexico-Canada Agreement (USMCA; the reboot of NAFTA) is expected to bring more dairy in from the United States. Negotiating trade deals, then paying off your own farmers to offset losses, means you don’t really believe free trade works.

Even scarier, Scheer doesn’t believe, or pretends not to believe, in science and verifiable truth. Because the idea that the new food guide was produced with a “complete lack of consultation” is a complete fabrication.

MORE: A huge disappointment: A dairy farmer reacts to the USMCA

There were also public consultations, which were open to industry stakeholders. However, during the policy development stage, representatives from the food and beverage industry were not invited, as the purpose of the Canada’s food guide is to prioritize the health of Canadians, not the financial interests of private businesses. Despite this, as the Globe and Mail’s Ann Hui reported, during the revision’s multi-year process, government officials at the AAFC secretly lobbied Health Canada on behalf of the meat and dairy industries.

The new food guide definitely deemphasizes meat and dairy. The most notable change is the replacement of volume-based daily portions from “the four food groups” to the concept of a ratio, a plate that is half produce, one-quarter protein and one-quarter whole grains. But Health Canada’s recommendations for infant feeding is still very focussed on cow milk, and the guide still mentions milk plenty (with the qualifier “lower fat milk”). It just doesn’t promote milk for adults the way previous iterations did.

And according to Osteoporosis Canada, before you resort to chocolate milk, there are lots of other ways to get calcium. A child probably won’t want to eat broccoli, beans, sardines, blackstrap molasses, or the three cups of hummus equivalent to the calcium in one cup of milk. But cheese has almost as much calcium as milk, and yogurt has more.

If Scheer disputes any of the scientific research—on chronic health outcomes such as cancer, cardiovascular disease, coronary artery disease (including hypertension, dyslipidemia and stroke), obesity (including adiposity and weight gain), osteoporosis (including bone health and fractures), and type 2 diabetes—used to update the guide, he can find all of it online, on the evidence-behind-Canada’s-Food-Guide page. And if he’s curious about the methodology, he can follow the link to “Evidence Review for Dietary Guidance: A Technical Report.”

But this isn’t about science. It’s about pandering to the dairy industry for votes.

And while I could fill 100 pages hypothesizing how various comic book characters would do as Canada’s PM, the question remains: who loves the dairy industry more? The answer is that they both care equally about rural votes. Trudeau’s promise is to pay off farmers. Scheer’s is to revoke an educational tool. Neither will change the generational trend that grownups don’t drink milk anymore. And you can’t legislate taste.