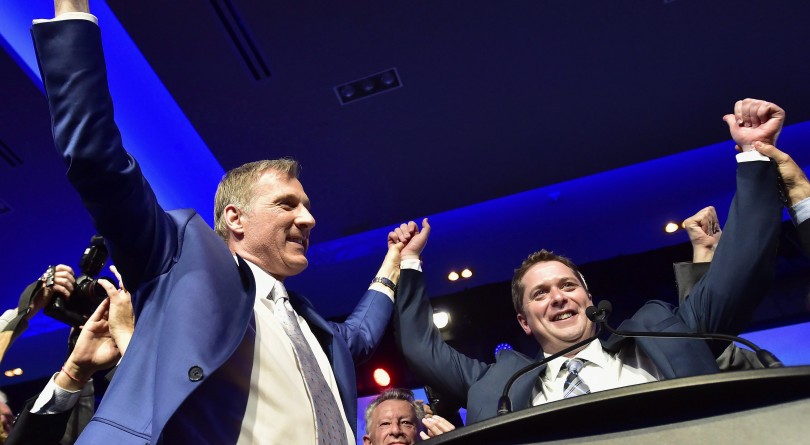 For a libertarian conservative, Maxime Bernier sure is acting like a classic Liberal.

No doubt hoping to send sales of his upcoming book, Doing Politics Differently: My Vision for Canada, skyrocketing into the tens, Bernier this week channelled his inner Paul Martin by teasing a subversive excerpt to the Globe and Mail in which he alleges that his boss, Conservative leader Andrew Scheer, won the party leadership thanks to “fake” Conservatives.

More specifically, Bernier alleges that Scheer benefitted from dairy-farming rent-a-member “Conservatives” who failed to renew their memberships once Bernier’s nuclear threat to dismantle supply management was seen off.

“Andrew, along with several other candidates, was then busy touring Quebec’s agricultural belt, including my own riding of Beauce, to pick up support from these fake Conservatives, only interested in blocking my candidacy and protecting their privileges,” Bernier scribbles. “Interestingly, one year later, most of them have not renewed their memberships and are not members of the party anymore.”

It’s the kind of intra-party tussle Canadians are used to seeing from the Chretien-Martin-Dion-Ignatieff-era Liberals, not the united Conservative Party of Canada. And for what?

Mad Max is shocked—shocked—to find out that not all voters in membership races are ideologically pure laine. And now, nearly one year on from his excruciatingly narrow loss to Scheer, Bernier is threatening Conservative Party unity because…the winner won fair and square. Forget the intolerance to dairy. Somebody isn’t managing their supply of sour grapes very well.

READ MORE: The Conservative and NDP platforms are starting to take shape

In addition to displaying an alarming naiveté about the nature of leadership races, Bernier is admitting that, despite the intellectual superiority of his anti-dairy cartel argument, he couldn’t amass a greater number of rent-a-members to his cause. Across the entire country. Not even with all 13 other candidates on the wrong side of the issue. To paraphrase some Conservative words of wisdom about another Quebec politician: Leaders get things done. Maxime Bernier is not a leader.

But forget the impertinence—it’s the timing of Bernier’s missive that’s perhaps more atrocious.

In case Bernier missed it, the prime minister has finally been knocked off his polling pedestal and is now up to his neck in pipeline muck. Planting excerpts of a book with the pretentious words “my vision for Canada” in its title only serves to undermine the agenda of the guy who just won a mandate to present an alternate vision to Trudeau’s in the next election.

Bernier’s intervention would at least make a dribble of sense if the Conservatives were debating the rules for their next leadership race. As anyone who follows these things knows, there is ample room for reform. But they’re not. Likewise, the thoughts would be pertinent if there was a debate ongoing about Canada’s cosseted dairy industry. But no milk is currently being spilled on that front either.

Bernier is peddling division solely to cushion his ego, all for a book that six people not named Bernier will read and even fewer will care about. A book that, by the way, doesn’t even go on sale until November. His intervention will, however, help to sell a few newspapers. Reporters love to chronicle intra-party warfare. It’s the popcorn of Parliament Hill.

Internecine strife is also very damaging. Ordinary Canadians aren’t likely to choose a party for government that can’t govern itself. Or, to put it in terms the more market-oriented Bernier should understand, party unity matters because it’s a rare commodity, one whose absence also gives succour to the opposing side.

Of course, Bernier says it’s a matter of principle. It always is for the ideologues. “A substantial portion of the party is behind me on (supply management),” Bernier notes. “And the next time an opportunity presents itself to debate it, I will resume my fight.”

Charge on, Don Quixote. But that time isn’t now. As the philosopher Larry Miller, who also doubles as a Conservative MP, put it: “Andrew won. So, too bad, so sad, get over it.”