Memo to Alberta: Get a grip

Stephen Maher: Indignation over pipelines is over the top—B.C.'s concerns are valid and Ottawa has far from failed to back the oil sands. 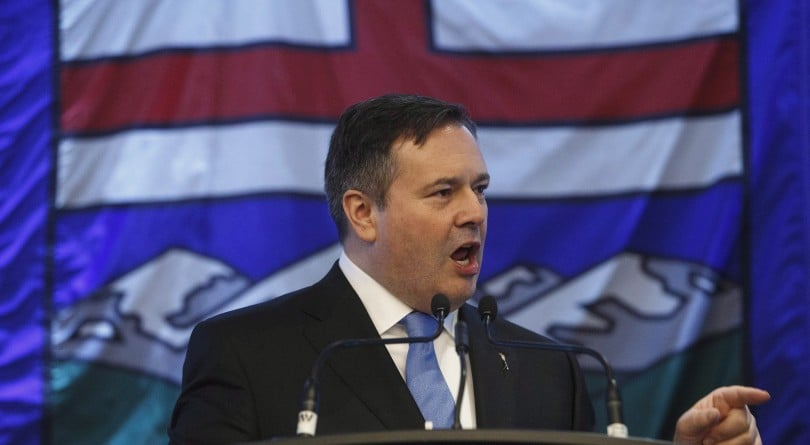 United Conservative Party leader Jason Kenney speaks to supporters after being sworn in as MLA for Calgary-Lougheed, in Edmonton, Alta., on Monday, Jan. 29, 2018. (THE CANADIAN PRESS/Jason Franson)

Sit down, Alberta. We need to talk.

The other provinces are—I don’t know if worried is the right word—let’s say concerned. You don’t seem yourself.

We get that you’ve been through a lot lately. Three years ago, the prime minister was an Albertan, your premier was a Progressive Conservative, there was no carbon tax and you had three pipelines in the works to connect your oil sands to the ocean.

These days, the prime minister is a Quebecer, you somehow have an NDP premier, carbon is being taxed and it looks like only one of those pipelines might get built.

We get that that’s a lot of change, and for sure changes like this take time to absorb, but your attitude doesn’t seem that healthy.

I know that you have your heart set on your pipeline, and your feelings are hurt that Premier John Horgan isn’t helping. But, guess what? He campaigned on an anti-pipeline platform and got elected.

Your righteous indignation is over the top, and your premier shouldn’t be threatening to cut off wine imports, oil exports and demanding that Ottawa cut off transfer payments.

READ MORE: Justin Trudeau is going to have to buy himself a pipeline

I think that we should build the pipeline, because it’s costing us too much money not to build it, but the people who don’t want it aren’t evil. A lot of people are in British Columbia because they want to live in a beautiful place near the ocean. The pipeline will help Alberta, but the main impact for B.C. will be increased tanker traffic, and a non-zero chance of a catastrophic bitumen spill.

Jason Kenney keeps inveighing against “radical environmentalists,” demanding that Justin Trudeau get tough and crack down on them. A former Alberta energy minister called on him to send in the army to deal with the “eco-terrorists.”

There is a small number of dangerous tree-spiking types in British Columbia who might pose a real threat, and a much larger group of people oppose the pipeline because they want to protect nature for their grandchildren. They are acting in an honourable tradition of civil disobedience. You want to send in the army, maybe sic CSIS on them?

Get a grip. One of the reasons that you are having so many problems getting pipelines built is that American environmentalists targeted the Keystone XL pipeline, warning that unlocking all the carbon in Alberta’s oil sands would be like exploding a “carbon bomb,” pushing us over the brink into global climate meltdown.

I can see why you are frustrated, because this is three quarters nonsense. Before Andrew Weaver became leader of the B.C. Greens, when he was a University of Victoria climate scientist, he crunched the numbers and found that burning all of Alberta’s oil sands “would be almost undetectable” on a global scale.

But, like it or not, the oil sands are a symbol for North American environmentalists. It is in your long-term best interest to change that, to remind policy makers that the lowest hanging fruit is coal, not oil. Calling for the army to beat up grannies protesting in Burnaby won’t help you convince reasonable environmentalists that you are not their biggest problem. If you were smart, you would try to bring the temperature down, not up.

This perception of Albertans as angry polluters isn’t going to change overnight, especially if you keep getting angry when people object to your pollution.

Your politicians use this kind of rhetoric because they want to feed a sense of grievance, fanning it like an ember that must be kept burning, because it is a vote-winner. But it is not based in reality.

Take Andrew Scheer’s response to Justin Trudeau’s announcement that he will use the federal treasury to backstop the Kinder Morgan pipeline.

Scheer has said that Trudeau, having failed to back the Energy East and Northern Gateway pipelines, and failed to engage on this file until too late, was forced to put up tax dollars at risk to get this pipeline built. Fair enough. I don’t expect Scheer to applaud Trudeau.

But to pretend that Trudeau could snap his fingers and bring Horgan to heel is dumb. And Scheer was playing to your sense of grievance when he claimed that before Trudeau, “energy projects were built without taxpayer support.”

He was swiftly fact-checked by Chris Turner, author of The Patch, which tells the story of the oil sands, an industrial undertaking that has been backed by the federal government from the beginning. In the early 20th century, the Geological Survey of Canada and the federal Department of Mines identified the potential and sought ways to develop it. In 1975, when Syncrude was struggling to make the first big project pay for itself, Jean Chretien convinced Prime Minister Pierre Trudeau to buy a stake in it. In 1996, when he was prime minister, Chretien gave the oil sands another boost by giving it preferential tax treatment.

With the single astonishingly ill-conceived exception of the National Energy Program, the federal government has always supported the development of the oil sands.

And many of the workers came from points east, including tens of thousands of Atlantic Canadians and Quebecers.

But every time we discuss pipelines, Albertans angrily denounce the equalization system that helps pay for hospitals and schools in the have-not provinces.

You can give that a rest.

There is one reason why Albertans pay more into equalization than people in any other province: you are rich, and rich people pay more taxes than poor people. A well-off taxpayer in Halifax pays just as much into the system as a well-off Calgarian.

In 2015, Alberta’s median household income was $93,835, compared with $60,764 in my home province of Nova Scotia. Would you really want to trade places with Nova Scotians, who pay high taxes to educate their children for export to far-off oil fields?

Thanks to your petroleum industry, which Canadians have helped you build, you are among the richest people in the world. You are not victims.

You should count your blessings, stop feeling sorry for yourselves and quit yelling at people who disagree with you.