Migrant caravans pray for a miracle in the Oval Office

One migrant's hopeful prayer: 'God is going to open the heart of Donald Trump so that he lets us in' 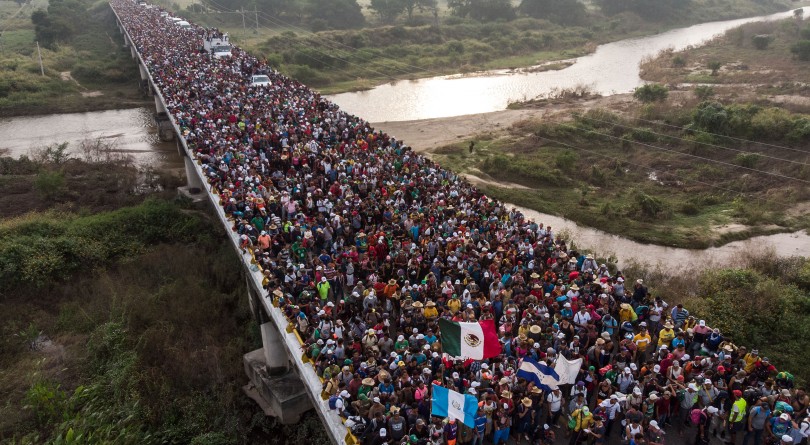 Aerial view of migrants heading in a caravan to the U.S., as they leave Arriaga on their way to San Pedro, Tapanatepec, in southern Mexico on Oct. 27, 2018. (Guillermo Arias/AFP/Getty Images)

At a water tap swarmed by migrants weary from walking 17 kilometres under the scorching sun from the Mexican town of Arriaga to the border of Chiapas and Oaxaca states, Jorge Canales stood in the shade, reflecting on the misery that made him leave Honduras with a caravan of Central American migrants.

Canales, 29, fled with his wife and two children, aged six and nine, after tattooed gangsters demanded the welding business he worked in pay the “war tax”—a euphemism for extortion. His brother-in-law and cousin used to work with him, but they set up separate business to try and escape the extortion—but they were killed. Canales figured he was next.

“They told me that if I didn’t pay them, they’d do away with my entire family,” he said, adding he hoped to make it to Canada as one of his brothers found work as a drywaller in Vancouver. “Gangs, crime, and even our shameless government won’t let us live in peace.”

READ MORE: In Mexico, the USMCA means life goes on

The caravan set out quixotically from the northern Honduras city of San Pedro Sula on Oct. 12, working through the length of Mexico and arriving in Tijuana barely a month later. Improbably, the caravan pushed past police blockades and closed borders and battled everything from blisters to fatigue to constant coughs and colds. It’s a stirring story of humanity trying to do better for itself through sheer force of will. Their strength in numbers have apparently helped rebuff drug cartels and the crooked public officials who prey on them, and allowed migrants to avoid smugglers’ fees that can top $13,000. It’s also spawning copycats.

Now the caravan is contending with the U.S. border and seems stuck in Tijuana. U.S. officials process fewer than 100 asylum requests daily—and more than 5,000 people wallow on an informal waiting list to make their claims. More than 6,000 caravan travellers converging on Tijuana also collapsed local infrastructure and has spurred local complaints—including protests. The prospect of waiting months in an uncomfortable camp for a shot a crossing legally into the United States, meanwhile, is driving some caravan travellers to despair—along with attempts at slipping across the U.S. border illegally.

Whether caravans continue to convene or not remains uncertain. But nobody sees the push and pull factors of Central American migration disappearing anytime soon. The northern triangle of Central America is home to three of the poorest and most violent countries in the hemisphere: Honduras, Guatemala and El Salvador. Crime, corruption, low wages and, increasingly, climate change are driving citizens out, while gang violence specifically pushes many to flee El Salvador and Honduras. A drought that hit Guatemala has caused brutal rural poverty, made worse by lowered prices for commodities such as corn and coffee.

RELATED: Trump’s cruelty toward migrants is shown up by this touching act of mercy

Honduras has been an especially unhappy place, convulsing with violence and political instability since a 2009 coup overthrowing leftist president Manuel Zelaya. The presidency of Juan Orlando Hernández, who scandalously won re-election in 2017 and was found to have funded his 2013 campaign with some of the $200 million embezzled from the health system, has been deeply unpopular, and he cracked down on post-election protesters, prompting many to leave the country. And amid all that, rising prices, stagnant wages, textile factories shuttering and job insecurity have exacerbated the problems.

“Rain doesn’t arrive on time. It’s much more complicated,” said Sebastian Castillo, pushing his five-year-old daughter Rosita in a stroller along the highway northward with 11 family members who figured there was nothing to lose. The 40-year-old coffee grower from central Honduras was asked to pay the war tax too, but he had bigger problems: crop problems after years of drought and changing weather patterns. “Our harvests are drying up in the branch and we can’t cover our costs.”

Little wonder, then, that a caravan originally promoted with just a Facebook post and TV news segment would capture the collective imagination.

“It’s just not MS13 extortion and murder” pushing people to leave, said Stephanie Leutert, director of the Mexico Security Initiative at the Strauss Center at the University of Texas, referring to the Mara Salvatrucha gang, which fights over neighbourhoods with the rival 18th Street gang. “It’s a rotten economic underpinning that makes a lot of the other stuff unsustainable, along with government institutions that feel totally illegitimate.”

And so these caravans are lured by the pull factors in the United States: personal safety, family reunification and wages that pay more in an hour than some Hondurans make in a week. Castillo, like most of the people in the caravan, didn’t show interest in staying in Mexico—where asylum claims have soared in recent years—and didn’t seem deterred by Donald Trump’s threats the caravans wouldn’t cross into the United States. “God is going to open the heart of Donald Trump so that he lets us in,” he said optimistically. It’s a hope and prayer caravan travellers are clinging to.