Millennials, it's time to side with Gen Z

Rachel Jansen: "We can either continue to oppose boomer values while upholding the status quo, or we can side with the younger generation and demand a new one." 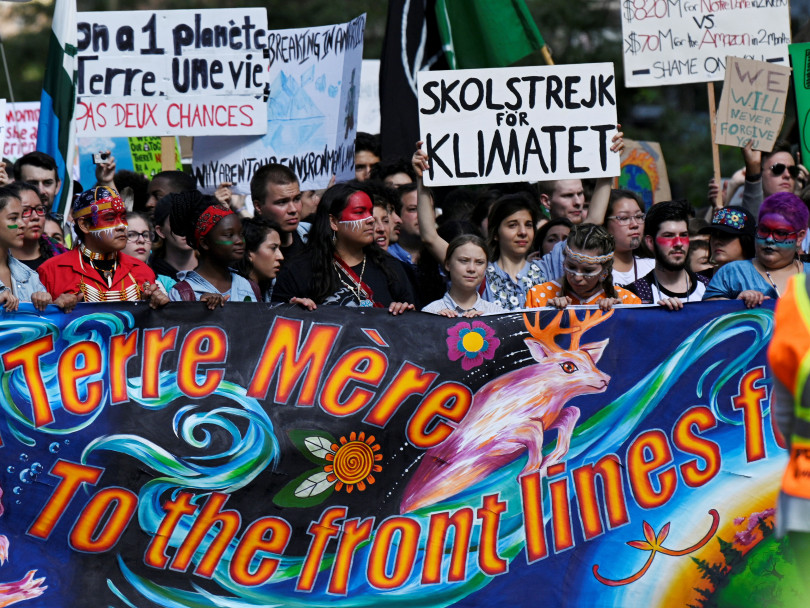 It's time for millennials, as the swing vote generation, to act on their grudging respect for Gen Z and help shift the balance of power to a new status quo (Andrej Ivanov/Reuters)

In October, the phrase “OK boomer,” which got its origins from a TikTok video, went viral. In the split-screen video, an unidentified 60-something male harps on millennials and members of Generation Z (otherwise known as “zoomers,” a generation loosely defined as those born between 1995 and 2012) for having Peter Pan syndrome. On the left side of the screen, a zoomer prints the words “OK boomer” onto a notepad and grins.

While Gen Z coined the term, which is meant to express their exasperation towards baby boomers, it has turned into something of a catchphrase directed towards people who adamantly resist change rather than those of a certain age group.

I’m a millennial, and we’ve co-opted the phrase fervently, on Twitter or against our parents at the dinner table. We even printed it onto tote bags and carry it around for the world to see. But our adoption of the term without giving it proper credit perfectly encapsulates the position millennials have found ourselves in: we resent boomers, but we’re not quite ready to cede the rebellion to Gen Z just yet. On one hand, we admire zoomers for their renegade ideals. On the other, we’ve grown accustomed to life under the boomer regime. In the race between the two generations as leaders, millennials are the swing vote. I firmly believe it’s time we elect Generation Z as our official representation.

READ: Why a group of rich millennials are giving their money away

It’s not that millennials differ wildly from Gen Z. We have also had to bear the burden of a hollowed-out economy and the derision of boomers who assume we’re ineffectual and lazy. Like zoomers, we also think resistance to change is dangerous, particularly when it pertains to the environment.

But the fact remains that even though millennials—particularly white millennials—define themselves in opposition to boomers, we grew up within their system, with their values of institutionalized education, meritocracy and mass consumption. Many of us implicitly—and even subconsciously—believe that post-secondary education is the best way to jump-start a career (despite the ever-increasing tuition costs and lack of job stability afterwards); that if you work hard enough at something, you will achieve it (despite the systemic “glass ceiling” in the corporate world); and that the environment will somehow regenerate (despite all the scientific evidence to the contrary).

A recent conversation with friends became subdued when talk turned to whether we would be willing to give up flying for good. For all my scoffing at boomer rationales against necessary change, I had my own slew of justifications: planes are taking off anyway; I’ve cut down my meat consumption; I need to enjoy life as we’re all going to die eventually. As I tally up my excuses, I imagine what a zoomer would say: “OK millennial.”

Every generation has had its hardships, but perhaps none as dire as the one Gen Z faces—the possible extinction of the species within their lifetime. If time is our most valuable commodity, then Gen Z has the most at stake. As a result, young activists like Autumn Peltier, 15, Nupol Kiazolu, 19, and international phenom Greta Thunberg, 17, have rallied arenas full of people for their causes—water conservation, racial equality, and climate activism, respectively. Recently, 15 Canadian zoomers between the ages of 10 and 19 filed a lawsuit against the federal government over climate change, citing a violation of their fundamental rights to the future, and demanding a reduction in CO₂ emissions.

Millennials may be more conscientious than most boomers, but we’re less radical than Gen Z—which is not to say there aren’t many millennials fighting the good fight. It’s just that we may be more complicit than we think by virtue of the era in which we were born.

This leaves millennials with a choice. We can either continue to oppose boomer values while upholding the status quo, or we can side with the younger generation and demand a new one.

The prevalence of “OK boomer” within my circles suggests more than a growing dissatisfaction towards boomers and their socio-political stances; it suggests a grudging respect towards zoomers. It’s a respect that I believe will give way to a shift in power. Gen Z’s actions have proved age is not necessarily wisdom; a willingness to learn is. And if we are willing to learn from our younger comrades, we will be very wise indeed.

This column appears in print in the January 2020 issue of Maclean’s magazine with the headline, “Millennials: Side with Gen Z.” Order a copy of the Year Ahead special issue here. Subscribe to the monthly print magazine here.