Monuments aren’t museums, and history suffers when we forget that 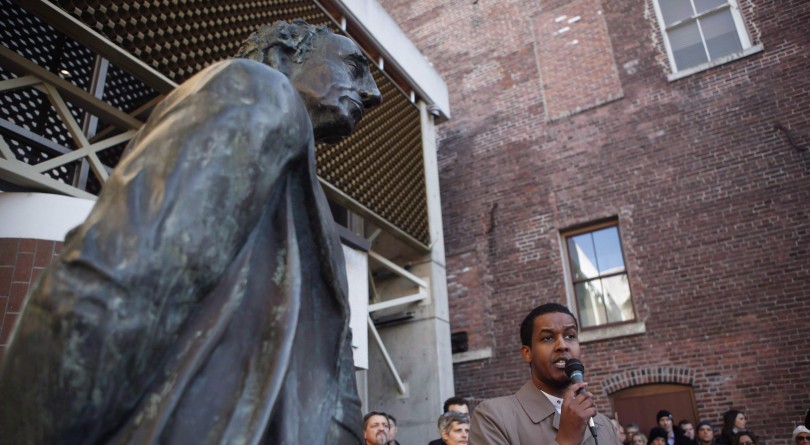 A statue of Sir John A. MacDonald overlooks the Imam at Masjid Al-Iman, Ismail Mohamed Nur, as he speaks to supporters and to the city of Victoria and the Muslim community during a vigil to honour the victims of the Quebec City mosque shooting in Victoria, B.C., on Jan. 31, 2017. The mayor of Victoria says a statue of Prime Minister John A. MacDonald will be removed from the front entrance to city hall as a gesture of reconciliation with First Nations. (Chad Hipolito/CP)

Matthew A. Sears is an associate professor of classics and ancient history at the University of New Brunswick.

The war over this country’s monuments doesn’t show any signs of letting up. Just a year after statues dedicated to historical figures like founding father John A. Macdonald and Nova Scotia governor Edward Cornwallis were taken down across the country amid conversations about these figures’ roles in anti-Indigenous rhetoric and actions, the latest scuffle concerns a statue of our first prime minister in front of City Hall in Victoria, B.C., which is now slated to be removed in a gesture of reconciliation with local Indigenous peoples.

It has churned up many of the same talking points that arose in the last go-round; while those in favour believe that hateful figures ought not to be celebrated, opponents believe that this is tantamount to the paving-over of history. It’s a line of thinking given voice by federal Conservative leader Andrew Scheer, who tweeted this in the wake of the announcement of the Victoria statue’s removal: “We should not allow political correctness to erase our history. We can look to the past, acknowledge and learn from mistakes, and celebrate achievements at the same time.”

But such sentiments—that removing or modifying public monuments somehow erases history—misrepresent not only what history is, but also what monuments are supposed to do.

Leave aside, for the moment, the absurdity of thinking that no one would remember history or historical figures were it not for statues. Instead, understand that the monument’s very essence is not about recording history in the first place: they’re designed to shape our perceptions of history in very particular ways and for very particular purposes,  ranging from glorifying a political leader or set of ideologies, to providing future generations examples to emulate. Rather than recording history, we should think of monuments as themselves being part of history—and frequently a very problematic and distorted part of history, at that.

What many believe monuments to be are actually the function of museums, the public institutions more properly geared towards preserving and teaching history through the context and broader narrative they are able to provide in that space. Though monuments and museums are often confused—and sometimes even unfortunately combined, such as at Monticello, the Charlottesville, Va., estate-turned-museum where Thomas Jefferson’s slave Sally Hemings, who bore at least six of the third U.S. president’s children, was only recently given due recognition—they serve different, even diametrically opposed, functions. At their best, museums convey history in all its messy complexity, and encourage visitors to ask questions of the past, including how it’s being used to shape the present. Monuments, on the other hand, are blunt-force objects, and frequently discourage nuance, deliberately distorting the past to convey something in the present that may or may not be an outright falsehood. That’s not their fault; it is simply how they’re used. 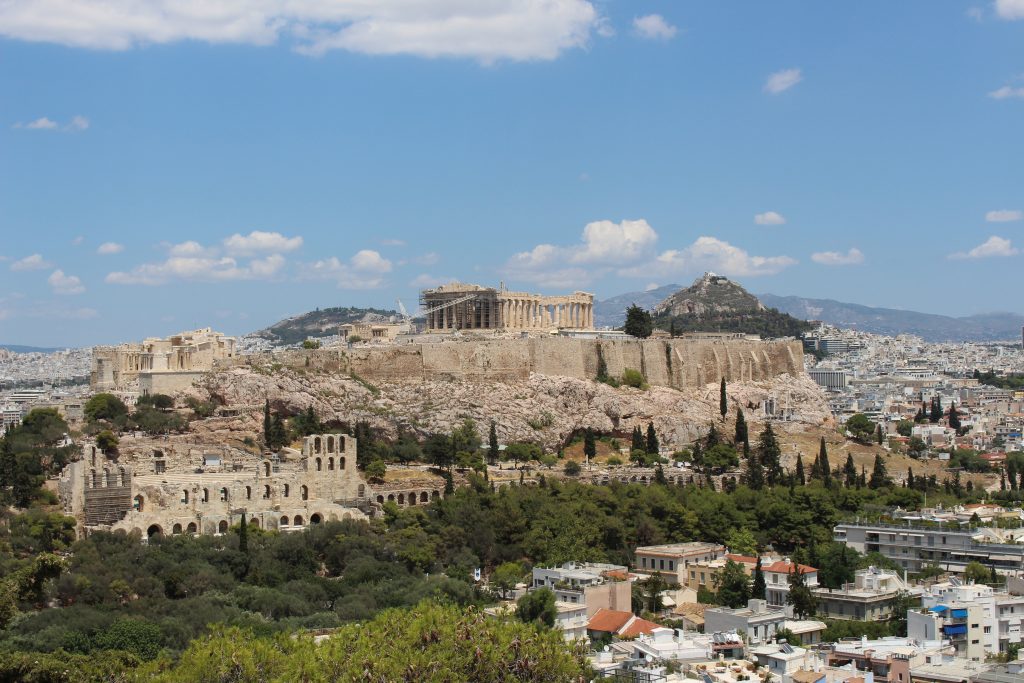 A view of the Acropolis in Athens. (Photograph by Matthew A. Sears)

Thucydides, the ancient historian who chronicled the Peloponnesian War, understood this deceptive power that monuments can wield. He mused that if anyone should visit Athens and its grandiose monuments in the distant future, the visitor would assume that Athens was twice as powerful as it really was. He argued that the opposite would be true of Sparta, a state more powerful than Athens but with scarcely any monuments at all.

Visitors to Athens today prove Thucydides right. Not only do the Parthenon and the Acropolis capture the popular imagination and inspire an outsize vision of Athens, people also often imagine it was more influential at its time. The monuments of the Acropolis do not preserve history as much as they represent a very deliberate distortion of history, one that continues to this day.

Far from just representing the Athenian ideals of beauty, reason, and democracy, the structures were actually financed by an exploitative empire, and were very controversial in their own day (their chief architect being accused of embezzlement, for example). While today’s viewer of the sculpted frieze that surrounds the Parthenon’s inner chamber would be forgiven for thinking that Athens’ backbone and military might was derived from its cavalry—that is, the wealthy elite—the reality is that the power and wealth that made the Parthenon possible came from the exploits of the Athenian navy, which was crewed by the poorest citizens. As scholars increasingly note, even non-citizens and slaves played a far larger role in Greek warfare than is preserved in Athens’s monuments, both physical and literary. In fact, non-citizens were deliberately left out of such monuments to prevent them from taking any of the credit, according to historians like Peter Hunt. And the gleaming white marble temples visitors now see were, until recently, surrounded by layer upon layer of structures built up over many centuries—medieval towers, mosques, even houses—which were all removed to highlight an ahistorical ideal of what ancient Athens was.

But that, again is not the fault of the monuments; they are doing what they’re designed to do, and visitors would be well-served by knowing that they do not offer the context of museums. But in Canada, even before the Truth and Reconciliation Commission and related initiatives rightly brought statues of historical figures like John A. Macdonald into focus, we’ve had situations in which museums were confused for monuments—which verges much more worryingly into the erasure of history.

In 2007, the new Canadian War Museum in Ottawa produced an exhibit about allied strategic bombing raids against Germany during the Second World War, which killed hundreds of thousands of people with limited effect on the war; as the museum’s plaque said, “the value and morality of the strategic bomber offensive against Germany remains bitterly contested.” But outraged veterans groups put pressure on the museum through a Senate subcommittee, and the museum changed the display’s accompanying text to say that the effectiveness of these horrific campaigns of civilian destruction is still being debated—even though, as the Senate said, the initial plaque was factual, and even though most historians now view the raids as indeed ineffective and morally suspect. Now this is something to be outraged about: Museums are supposed to ask the hard questions and challenge popular perceptions of the past, and they should not bow to pressure from such lobby groups to edit history—especially since Ottawa’s National War Memorial, where Canada’s veterans are remembered and celebrated, is only a few blocks away.

Yes, museums—like monuments—can often be plagued by ideology and a lack of rigour, such as the controversial new Museum of the Bible in Washington, D.C. But the best curators and interpreters have their ear to the ground to stay on top of the most recent debates in academia, to find more effective ways to present difficult issues to a broad public and, in short, to preserve and disseminate history responsibly and meaningfully. It is something that monuments simply aren’t equipped to do.

No one is arguing that we should erase John A. Macdonald from history. We should by all means learn about Canada’s first prime minister whose bold and resilient vision for Canada also included a very troubling legacy when it came to Indigenous people. And through museums, textbooks, and other media, we will. But refusing to let his image stand in a prominent public place in the form of a monument, without interpretation or context, is not eradicating history. Rather, it’s engaging with it.