My encounters with CSIS

Ramz Aziz: CSIS arbitrary outreach to Muslim students does everything but identify risk factors for radicalization 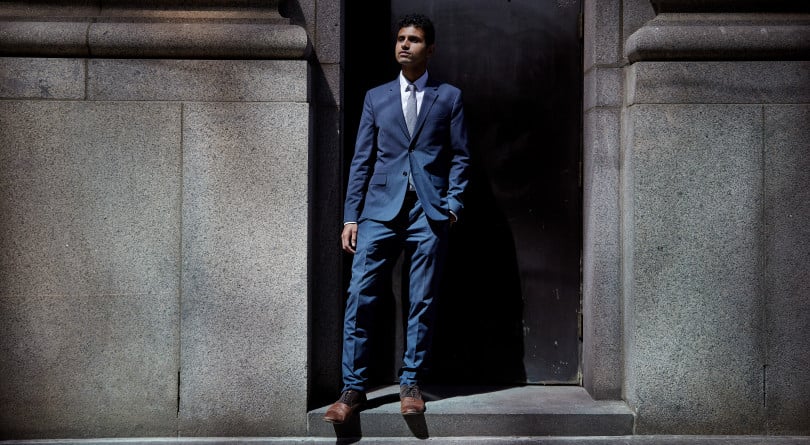 Ramz Aziz, near his Toronto office. (Photograph by Christie Vuong)

My first interaction with the Canadian Security Intelligence Service (CSIS) occurred in 2012 while I was an undergraduate student at Dalhousie University. I was heavily involved in student life—I had a job as a residence floor leader and I was president of the Muslim Student Association (MSA).

I have a flashbulb memory of sitting in my dorm room one quiet night in April, when I received a frantic call from one of my fellow club executives. They said that someone from CSIS had left a voicemail at their family home asking if they were the president of the MSA. Their family was alarmed and frightened, wondering what activities their child was involved in and who they were associated with. I told my colleague not to worry—there must be a misunderstanding here. After all, we weren’t involved in any illegitimate activities; I’d do my best to figure out what was going on.

How could I have captured the attention of Canada’s national security apparatus? Had I unwittingly endorsed radicalization in my capacity as a student leader? I’d always made an effort to express our shared Canadian values of plurality and tolerance at public speaking engagements, but wondered if I’d said something inappropriate. Had my behaviour fit the profile of a sleeper terrorist? I reassured myself again—this was all one big misunderstanding.

The next day, the call came.

It was from a blocked number. The voice on the other end was friendly. They asked if I was president of the Dalhousie MSA, and explained they’d like to meet over coffee, perhaps at a Tim Hortons near my house. I wondered how they got my number and suspected they already knew where I lived. Still, I probed about the purpose of this meeting. It was to tell me about the “services” that CSIS provides, the voice on the other line said. They provided a name and callback number.

I contacted my boss and residence supervisor the next morning. We got in touch with Dalhousie security, who followed up with Halifax Regional Police about the veracity of the phone call. In just one week, Dal security confirmed that the call did come from CSIS. I could refuse the meeting, university security said, but if I consented, I should bring a friend and meet in a public place.

It’s jarring for a 22-year-old to be contacted by a government organization. This must be important, I thought. So I called the number I was given, and the officer and I arranged an in-person meeting in the lobby of my student union building. I brought a friend, as security suggested, who observed from a distance.

When we met, I asked about the purpose of the meeting.

“To tell you about the services that CSIS provides,” they said, repeating what they’d already told me on the phone.

“What services?” I asked.

“Let’s say your parents…where are they now?” They interjected.

I said they were currently in Pakistan, but often visiting their children in Canada and Singapore during their retirement.

“Let’s say your parents are kidnapped in Pakistan, and someone forces you to do something you don’t want to do,” the officer explained. “If you’re ever in that situation, you can call us.”

I couldn’t believe what I was hearing. The hypothetical provided was so remote, so out of the realm of my daily existence. For a moment, I wondered if my parents were actually in danger. But they weren’t involved in politics or the Pakistani business community; they were just regular, middle-class Pakistani-Canadians. This scenario seemed highly unlikely, I told the officer.

“And why was the MSA the only student group on campus to be contacted by CSIS?” I also asked. This might make Muslim students feel like we’re being singled out and targeted.

They’d been given a list with all student groups on campus and my name was near the top, the officer said. They just wanted to let me know I could call them if anything happened. And plus, all student clubs on campus would be contacted eventually.

(Later, while serving as president of the Dalhousie Student Union [DSU], I found no evidence of a campus-wide outreach program.)

A total of two people on our MSA exec received a phone call from CSIS. In the aftermath, several members expressed discomfort at being involved in the student group, and in some cases, identifying publicly as Muslim. This was particularly challenging since the majority of our exec were women: those who wore hijabs felt uncomfortable on campus due to the identifiable nature of their dress.

There were professional consequences, too. We were in the midst of working on a program that trained Muslim students on necessary oratory and speechwriting skills in order give more inclusive sermons, but it was axed due to concerns that graduates of the program would be flagged. Some student leaders even disengaged from their non-Muslim commitments, for fear that CSIS would somehow interfere with their future goals.

Muslim students like me began to self-censor, and worry that we couldn’t express dissatisfaction with the government, lest our views be construed as radical or a threat to national security. Our families felt that the best strategy was to put our heads down, do good work, and not cause trouble, adding a further barrier between our community and its participation in civic action.

We felt that CSIS considered MSAs to be fronts for terrorist organizations. On the contrary, MSAs fall on a broad spectrum, with some being social forums for Muslim-identified students to connect, while others are opportunities to engage in advocacy and charitable initiatives. CSIS’s outreach efforts seemed to aggravate the “us versus them” narrative already prevalent in public discourse; it signalled that we do not belong.

The officer I met at Dal didn’t seem concerned with understanding the psyche of Muslim students, the issues important to us, or the stressors and cultural barriers that might be risk factors for radicalization. With reports of Islamophobia and hate crimes against Muslims increasing every year—the Quebec mosque shooting is a more recent and painful example—it would be more productive from a national security perspective to take the time to understand the top-of-mind issues for Muslim youth before inadvertently exacerbating feelings of alienation and resentment.

MORE: Where I come from

In the spring of 2017, I was living in Toronto and completing a law degree at the University of Toronto. I received a call on my cell phone from another person claiming to be from CSIS, asking to follow up on our interaction years ago. I told them I’d moved to Toronto, hoping that they would simply bid me a good day. Unfortunately this wasn’t the case. The Toronto office would follow up with me, they said.

The same sense of dread that overcame me five years ago came rushing back: why were they still interested in me?

That summer, I received a nervous phone call from my mother-in-law. Public safety officers were at her front door looking to speak with me. She gave the phone to the CSIS officer who stated that I was a difficult person to find. I was a bit taken aback by the assertion that I was hiding; I was part of multiple on-campus groups at U of T, and my email was readily searchable online. The officer gave me their number and asked to meet for coffee. I subsequently broke the LCD screen on my phone, lost their number, and they have not followed up since.

At U of T, I met several other students from across the country who had also been contacted by CSIS at their undergraduate institutions. Simply showing up unannounced at students’ homes, or approaching them randomly outside mosques—as has been reported to me by others—seems like a very heavy-handed and unsophisticated approach given that youth are in a vulnerable position. I felt through my experiences with CSIS that the needs, convenience or comfort of students were less important than their mandate.

Should the public not be given the means to understand the nature of CSIS’s outreach program? What is the scope? What are the goals? How is success measured? This basic information can the provide context that might make target communities feel more comfortable with how they fit within the bigger picture. Without context, it would be hard to dissuade even a casual observer that these outreach activities are not discriminatory on the surface.

If CSIS is interested in building relationships with Muslim youth on a national scale, it would be wise to establish processes that help foster trust, accountability and transparency. Unfortunately, my encounters with the agency were everything but that.

MORE: Why a lone Good Samaritan stepped up in a Vancouver attack on Muslim teen

For any student, Muslim or otherwise, who has been contacted in some manner, remember that you have the right to refuse. Although politely declining the invitation may not mean future solicitations will not arise, it is important to remember that you can also set boundaries depending on your comfort level. If you would like to proceed, you can ask for further identification or take time to get back to them.

2. Get help from your college or university

Your student union may be able to connect you with additional support. The recent CSIS hotline at U of T may be an excellent avenue to get free legal advice on next steps. You can also contact the Canadian Muslim Lawyers Association or National Council of Canadian Muslims.

3. Meet in a public place and bring a friend

Meet at a place where you feel comfortable, preferably a place with cameras that can document the interaction. Bring a friend along to observe from a distance.