My son has never seen a grasshopper

Scott Gilmore: Where have the horseflies, ladybugs and dragonflies gone? Insect numbers are plummeting everywhere, and it could mean the end of our world. 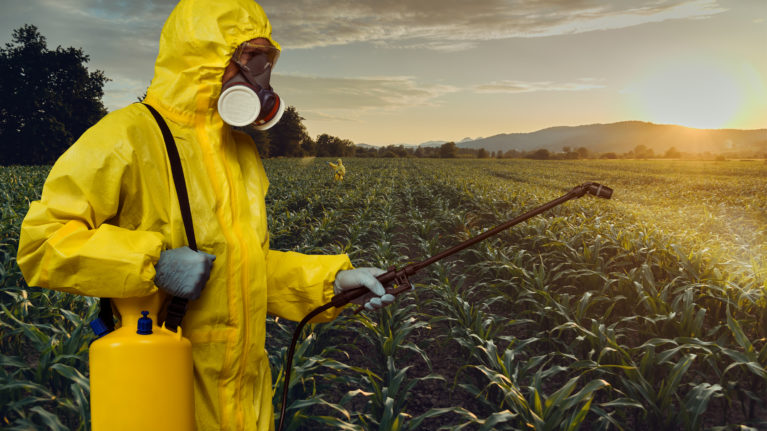 A worker sprays pesticides on a corn field (Getty Images)

There used to be bugs. Everywhere.

My childhood was filled with bugs. And I wasn’t even a bug kid. Unlike some of my friends, I didn’t have an ant farm or a butterfly collection, and I didn’t read books about spiders. Nonetheless, my days were filled with bugs.

There were ladybugs that would fly into the house, then be gingerly carried out again. Daddy-longlegs would sit harmless, high on the living room wall, eliciting shrieks below. A long drive to see the grandparents meant a bug splattered windshield. In the spring the caterpillars would inevitably infest at least on tree in the yard, so many stripping the leaves you could hear them chew.

There were itchy mosquito bites on my legs in the summer. And, in the still evening air, there were dragonflies patrolling overhead, feeding on them. Swimming at the cottage meant horseflies tangled in my hair. Walking across the lawn meant hearing the buzz of bumblebees on the clover. Remember all the butterflies? Or grasshoppers in a jar? Remember that horrible feeling when you realized you’d forgotten to punch holes in the lid? And there were always ants, everywhere if you looked hard enough. And, as a kid, I did.

I am now 48 years old, and there are no bugs in my world. I didn’t realize it until this spring. I had assumed the unusual cold was to blame. Then it occurred to me I could not recall the last time I had seen a ladybug. Or the last time I swatted at a horsefly. There are no ants in my yard.

At first, I thought how sad—adults mustn’t see these things. My life has become so busy I stopped noticing the life all around me. But then I looked. And it wasn’t me. The bugs have all gone.

I have since learned this is a phenomena being experienced all around the world. In Germany, a recent survey found the insect population had declined 75 per cent over the last three decades. In Puerto Rico, scientists calculated that there are now only one tenth the number of spiders there were in the 1970s. Back in Canada, honeybees have begun to die off. Last year a review of over 70 recent research projects from around the world concluded that insect numbers have fallen so fast that over 40 per cent of all species may be extinct within the next few decades.

So what is killing all the bugs? Entomologists believe it is many things, that have been happening together over many years, which cumulatively reached a tipping point.

Pesticides, of course, have intentionally wiped out a large portion of the insects we classified as pests (even though they all played a specific role in the ecosystem, and even though the chemicals killed many other insects unintentionally).

Climate change has played a huge role. And, at the same time, around the world small farms have declined, reducing the number of fence lines and hedgerows. Decades of deforestation in the Amazon and in Asia have eliminated whole biomes. Wetlands have been drained. Even artificial lighting has wreaked havoc for bugs.

The implications are so large, it is difficult to fully process it. The entire food chain, of the entire planet, depends on insects. Without aquatic insects fish would disappear. Without flying insects, there are no birds. Without pollinating bees, crops would fail everywhere.

Insects make up 80 per cent of all known species. If this die-off continues and, as is being predicted 40 per cent of the world’s insect species were to disappear, that would be what scientists call a “mass extinction event”. In the last billion years the earth has only experienced five of these. These were caused by giant meteorites, massive volcanoes or runaway ecological collapse. And they are chapter markers in the geological record marking the end of most life on the planet, and the slow gradual emergence of a new ecosystem.

If this is another chapter marker in the history of the planet, be assured that the human story is not continued in the next.

I don’t need to tell you what to think about this or what we need to do. We all know. Lower carbon emission, regulate chemicals, protect ecosystems. Will we do it? I don’t know. Maybe. But, it is an ominous sign that we have already inflicted an insect apocalypse on the planet, and we have barely even begun to notice. I just asked my nine year old son if he has ever seen a live grasshopper, outside of books and television. He didn’t even hesitate. “No, why?”

The ship is already sinking. And we are asleep in our state rooms.