NATO will endure, with or without the United States

Opinion: The U.S. has been scaling back from Europe since before Donald Trump became president—and NATO has been preparing well for that inevitability 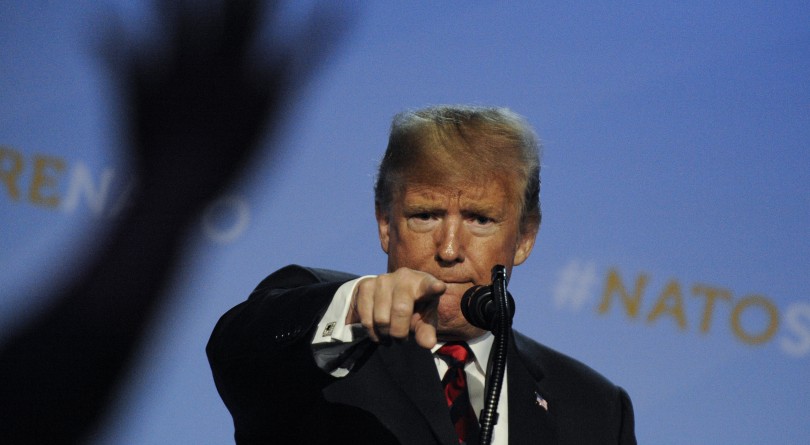 U.S. President Donald Trump is seen during his press conference at the 2018 NATO Summit in Brussels, Belgium on July 12, 2018. (Jaap Arriens/NurPhoto via Getty Images)

If you were to walk onto the Ādaži military base in Latvia, about 25 kilometres north of Riga, and head for the mess hall, the first things you notice are the patches on everyone’s shoulders. There are plenty of maple leaves, and then a mix of flags from Spain, Italy, Poland, Slovenia, the Czech Republic, and a smattering of others.

Some of the soldiers commingle, sitting at the long tables that line the room and digging into a respectable mix of food. Some of it is traditionally Latvian—a lot of smoked fish—and some of it is more recognizable dining hall fare, like spaghetti and meatballs.

But on that day in February, nowhere in the mess hall—or anywhere else on the base—would you find an American flag.

The various nationalities assembled in Ādaži were there for one of the most ambitious NATO missions in Europe since the end of the cold war. They, like their compatriots in Lithuania, Estonia, and Poland, are serving as a military shield, warning Russia to stay out of the Baltics.

Of the four battlegroups, only one—Poland’s—is being led by the Americans.

The battlegroups are not massive, nor is the mission particularly high-risk; as NATO stresses, the deployments are a deterrent, not a defence. But in an era where the president of the United States is openly and loudly questioning the very existence of NATO, it nevertheless represents something important: the possibility that, despite the president’s invectives, perhaps Europe actually can defend itself.

“It actually also proved that NATO is also very efficient organization,” a senior Latvian official told me at the time. “Contrary to what people sometimes think of NATO.”

People like, say, the leader of the free world. At this year’s NATO summit in Brussels, President Donald Trump upended much of the agenda by browbeating his fellow military partners, tweeting that the other countries had been “delinquent for many years in payments that have not been made,” wondering, “Will they reimburse the U.S.?” He demanded that member countries not just up their domestic defence spending to 2 per cent of their GDP, but to 4 per cent instead.

Many have highlighted the absurdities of the president’s statements. Actual payments to NATO by its member countries for both civilian and military programs run directly through NATO are made proportionally, based on each country’s gross national income; the U.S. contributes 22 per cent, the U.K. 10 per cent, Canada 6 per cent, and so on.

But it’s the 2 per cent figure, adopted by the NATO summit in 2014, that the president has truly obsessed over. As of 2017, the United States spends roughly 3.57 per cent of its GDP on defence. The other NATO members spent, on average, 1.45 per cent.

You needn’t be a five-star general to realize that comparing U.S. defence spending and that of, say, Germany—as the president has done repeatedly on his Twitter feed—is to compare apples to oranges. Only a fraction of active-duty U.S. personnel are deployed to Europe, and yes, most of them are in Germany. Most European countries do not have extensive military presence in Asia or the Middle East. What’s more, the decision to contribute so extensively to European collective defence has been a U.S. policy priority since the end of the Second World War.

Still, Trump has been quite self-satisfied in his griping, bragging that many countries have upped their defence spending since he took office. Canada is in that camp, having jumped from the back of the pack, with spending below 1 per cent of our GDP, to the middle, at around 1.4 per cent. That’s thanks mostly to a new spending plan unveiled by Defence Minister Harjit Sajjan last year

But here’s the thing, though: Despite the Trump-inspired focus on U.S. participation in NATO, the organization has been preparing for U.S. withdrawal from Europe for years.

After all, it was when Barack Obama was president that NATO first adopted its 2 per cent spending goal. That’s because in 2015, Washington closed down 15 of its permanent military bases in Europe. In 2016, Obama arrived in Parliament to tell Prime Minister Justin Trudeau that NATO will be better off once everyone, including Canada, “contributes its full share to our common security.” It was a not-so-subtle prod to get Canada to step up and shoulder some of America’s burden on the continent.

And Ottawa appeared to hear the message. Gen. Jonathan Vance, the chief of defence staff, told me this spring that while he’s not fond of spending 2 per cent for the sake of hitting 2 per cent, Trump had little bearing on Canada’s upped investment. “My view: We were going there, no matter who was in the White House,” he said.

Some have pointed to Obama’s statements as vindication for Trump’s slapdash position, but it is not. Obama’s position was a recognition of reality: it makes little sense for America to station itself in Europe forever, and someone will eventually need to fill the gap. Trump’s position, one that is becoming increasingly familiar, is that America is getting ripped off by its allies as part of some conspiracy to defraud the United States and, as such, a preposterous policy solution is required.

Trump’s quixotic campaign against his own military alliance also happens to fit perfectly into the Russian narratives around NATO. When I was in Latvia earlier this year, I had the chance to stop by the NATO Strategic Communications Centre of Excellence which, among other things, studies Russian narratives and propaganda targeting NATO. Researchers there say they’ve identified consistent narratives emerging from Russian state media, and one of the main ones is that NATO is obsolete, or can’t adequately protect itself. Trump seems all too happy to play up that exact notion.

But this is where we are. While Obama may have begun the process of decreasing NATO’s over-reliance on America, Trump has hastened it. And now NATO needs to deal with that reality, and start figuring out a new European order where America can’t always be relied upon. Any number of things may come next, after all: a drawdown of U.S. troop levels in Europe, more base closures, or a wholesale repudiation of Article V, which compels members to defend each other in case of an attack. It’s all on the table—including America’s withdrawal from NATO itself.

The good news is that they seem to be forging that new path, and the Baltic missions are prime examples. What my trip to Latvia in February showed is that NATO nations are learning how to integrate tightly with a host of other nations at a very micro level—even without the U.S.—meaning that load-bearing is increasingly possible. It seems unlikely that any one European nation, each facing their own particular issues and domestic pressures, will step up and fill the void left by a retreating American power, but collectively, NATO may be well-suited to cover all the necessary capabilities.

“NATO has been actually quite agile for a large institution,” Vance said. “It has responded well to stimulus.”

The stimulus introduced by Donald Trump will ultimately mean more than just determining how much Canada and its partners spend on defence. It may well reshape the alliance as a whole—and arguably for the better.