No more mushy middle: 2018 will be the end of centrist politics

Across the West, mainstream politicians have preached centrist compromise, but the cracks are showing and a reckoning is due. 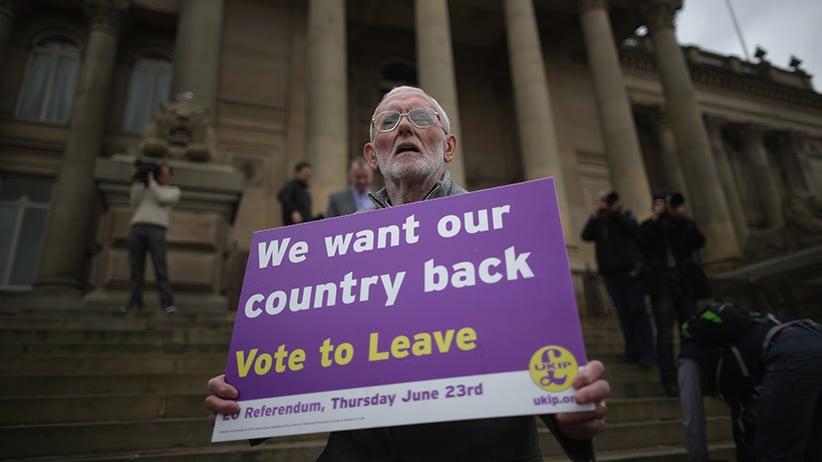 A Vote to Leave campaigner holds a placard as the leader of the United Kingdom Independence Party (UKIP), Nigel Farage, campaigns for votes to leave the European Union in the referendum on May 25, 2016 in Bolton, England.(Christopher Furlong/Getty Images)

The political left, especially in post-9/11 America, has long found itself pulled rightward out of fear and pragmatism, and into the political framework of centrism. It’s a fear that resisting the surveillance state and the prosecution of endless war could cause them to be blamed, should another massive terrorist attack succeed on American soil. And that pragmatism comes from the conventional wisdom that embracing the “identity politics” of feminism and racial equality would only alienate mainstream voters.

It’s a neoliberal doctrine that often presents solutions to social problems through the lens of capitalist interests. Barack Obama’s Affordable Care Act, for example, was sold as an expansion of coverage that would leave the profits of the insurance and health-care industries intact.

Indeed, through 2017, we have seen the Obama White House’s compromise-centric governance style play out across Western nations. A stubborn refusal to end the world’s dependence on oil in the face of pipeline spills and impending climate disaster, stagnant wages and job insecurity in the midst of ever-widening income inequality, and a general obsession with middling compromise on urgent social issues shows how corporate interests are allowed to flourish under the guise of centrism. This approach has allowed the status quo to remain intact, eroded the left’s public trust in government, and empowered the far-right to seize the reins of power. In Europe, austerity measures in response to the 2008 financial crisis—caused by rampant fraudulence and malfeasance in the financial sector—managed to fray the social safety net and effectively punish students and low-income workers for the disastrous greed of the billionaire class.

And that is why 2018 will be the year of collapse for centrist politics.

Centrist thought, when converted to policy, not only puts off the consequences of poor decision-making, it prolongs conflicts that should have long ago come to their natural end; it’s a Faustian bargain that comes with a heavy deferred cost. In the United States, the centrist obsession with “compromise”—which included its approach to slavery and which, as The Atlantic’s Adam Serwer writes, laid the groundwork for lasting racial conflict—has led to a deeply fractured society, perpetually entangled in foreign wars and vulnerable to wedge politics.

Most recently, the centrist view of the country’s foundations in white supremacy allowed Trump’s victory to be passed off as “economic anxiety.” But as more data and journalistic profiles of Trump voters surfaced, that theory soon withered. And now, concerns over race and racial status have so deeply permeated the thinking of Trump supporters that white supremacy has once again taken hold of a major political party, allowing neo-Nazis to march confidently in the streets.

The emerging social fractures as a result of decades of centrist politics are far from confined to the United States. Currently, the U.K. finds itself pushed from one worst-case scenario to another, as Prime Minister Theresa May struggles to negotiate the country’s exit from the European Union. The unexpected success of the Brexit campaign, championed by nationalist party UKIP and the far-right wing of the governing Conservative Party, was also once explained via the centrist rubric of “economic anxiety.” But while drastic cuts to health care, housing, and social security, on top of a public-sector pay freeze have indeed caused anxiety, the campaign for Euroscepticism in the United Kingdom was couched in the language of national sovereignty, and antipathy towards the political elite: A study from the University of East Anglia showed that immigrant engagement was a key factor for Brexit supporters. Those working-class anxieties, inflamed by a campaign of erosion against social welfare programs, not only drove voters into making a short-sighted change to European financial and trade policy, they were successfully weaponized by the populist right against people of colour.

Indeed, few Western nations seem immune to the accelerating breakdowns. In post-austerity Germany, radical right party Alternative for Germany (AfD), commonly described as “hostile to democracy” by mainstream media outlets, won 94 seats in the September general election. A collection of business leaders, right-wing populists, and Christian Democrats dissatisfied with the Merkel government’s 2009 Euro-Rescue policy, as well as its acceptance of more than a million Syrian refugees between 2015-2016, German support for AfD has steadily climbed since its 2013 founding. But Merkel’s centrist policies in the post-austerity era wound up producing support from 12.6 per cent of voting Germans for a party that deliberately stoked fear of religious minorities.

Elsewhere, the anti-immigrant Sweden Democrats—currently the third-largest party in the country—have a legitimate chance at winning the 2018 election; they’re currently polling higher than the governing Social Democratic party. And in Austria, the Austrian People’s Party, led by anti-immigrant leader Sebastian Kurz, rode the strength of nationalism into largest-party status for the first time since 2002. In each of these instances, the neoliberal policy of alienating the left by eschewing social welfare, and then courting the right through corporate welfare and deregulation, have only managed to empower the revanchist far-right.

These breakdowns along ideological lines are no coincidence. Centrist politics have, for decades, allowed Western governments to avoid a reckoning with the urgent economic crises of poverty and class immobility. That reckoning, fertilized by regulatory neglect and a failure to rein in the influence of the corporate class, has finally come due. In short order, those governments will find themselves answering to the consequences of substituting populism—and even dog-whistle politics—for substantive labour and financial policy when opportunities presented themselves. There are emerging socialist democratic movements like the Jeremy Corbyn-led Labour party—but it’s becoming apparent that for the left, the middle way has failed.