Not a coup. Opposite!

Shannon Gormley: It wasn't an insurrection, it was simply a few thousand homicidal people under the direction of the president after he told them to 'fight like hell' 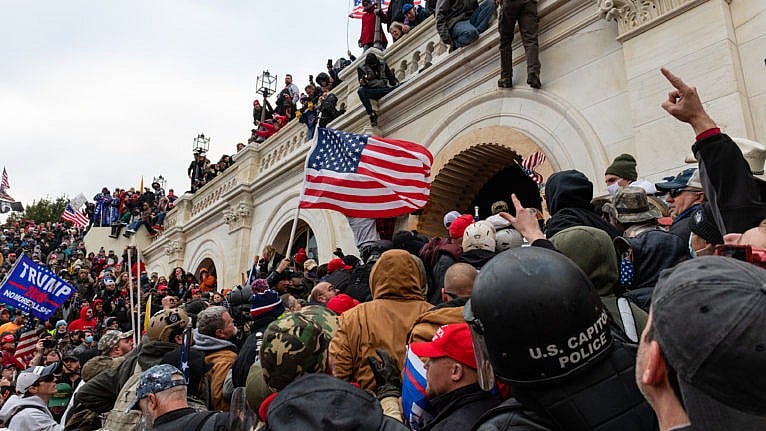 Demonstrators enter the U.S. Capitol building during a protest in Washington on Jan. 6, 2021 (Eric Lee/Bloomberg via Getty Images)

I’m no Trump supporter, but let’s be reasonable: On Jan. 6, the president did what every politician does—he asked his supporters to fight for him, and after they fought for him by invading a government building, assaulting four dozen police officers, and hunting down and threatening to assassinate the country’s top lawmakers, he told them he loved them.

And now, with nothing but the evidence of hundreds of hours of eyewitness footage playing out for the entire country to see on TV, the Democrats rush to judgement and impeach him. And for what? Trump may not be to everyone’s taste, but it takes a particularly fevered imagination to describe a violent attempt to overthrow the government as a violent attempt to overthrow the government.

No one is saying that what happened at the Capitol was pretty. Lots of things aren’t pretty. Urging a mob to assassinate the vice-president and subvert a democratic election to maintain your grip on power; abusing the presidential pardon to reward corrupt political allies and erode the rule of law; cancel culture. This is all ugly stuff. But come on. Let’s lower the temperature. This is a time for healing, a time for unity, not for meticulous investigations into a presidentially-incited riot that led to the deaths of  five people and turned the nation’s capital into something resembling a war zone. To everything there is a season: a time to hold people to account, and a time to utterly fail to hold people to account.

READ: Where might Donald Trump run, in a bid to avoid prison?

Let’s review the bidding. Did the sitting president, who had for two months failed to persuade a single court to overturn the election result in more than 60 attempts, release his mob of unhinged supporters upon the Capitol at the precise hour when legislators were about to certify his rival’s victory? Yes.

Did his lawyer call for “trial by combat” before that same mob that same morning? Also yes.

Did the president call for military and law enforcement to join the mob? Looks that way.

Did the mob grab a police officer’s gun and say, “Kill him with his own gun”?

Did some arrive with tasers? Check.

Did they place explosive devices in strategic locations around the city that could have served as decoys for their invasion of the Capitol building had the bombs successfully detonated? No doubt about it.

Did the rioters include highly trained former and off-duty military and police officers? They did.

Did the rioters say they wished to prevent the legislative branch of government from certifying the results of a democratic election? Of course.

Did they call for “Heads on pikes”? Naturally.

Did they construct a gallows specifically designed to hang and kill the vice president who had angered the president, and did they repeatedly declare that they wished to hang him, and did they search the Capitol asking where he was for the purpose of hanging him? Yes, yes, and yes.

Did they say that they were sent to the Capitol by the sitting president? Many, many times.

And did they receive enthusiastic applause from the sitting president as he watched rather than fierce denunciations, demands that they leave the Capitol, and immediate orders to mobilize the National Guard? One would expect nothing less.

I guess what I’m trying to say is: calm down. Let’s end the emotional exaggerations and the “Trump Derangement Syndrome” and be clear about what this “failed coup attempt” really was. It wasn’t an insurrection—it was simply a few thousand deranged, homicidal people, many of them armed with weapons, combat gear, military training, hostage-taking equipment and uncanny knowledge of the complex tunnel systems underneath the national legislature, who with planning and weaponry overcame the defences of the Capitol under the direction of the President of the United States an hour after he told them to “fight like hell”, and after months of him refusing to concede defeat in a legitimate election he repeatedly claimed was rigged. That’s all. If you want to make it out to be anything more than that—I hate to be the one to tell you this—but you’re becoming what you hate. If you want to see a real coup, an innocent man-child has now been forcibly removed from Twitter merely for repeatedly urging his followers to do something that was totally not a coup.

It’s important we be precise in our terms: this was not a coup, worthy of impeachment; this was A Very Bad Thing, worthy of being called A Very Bad Thing. If we surrender now to the demands of law professors and respected statesmen to convict and remove the president, what kind of precedent are we setting? Are we going to remove every future president from office who sends an angry mob to hunt down and kill legislators tasked with ensuring a peaceful transition of power?

What bothers me most is this: Why would anyone think that when the president told his mob of supporters to “fight like hell,” and his son said “actually fight,” they literally meant “fight”? Is it because the President’s supporters actually, violently fought or that when they did actually, violently fight, he was reportedly very excited about it? Or that when people asked him to prevent his supporters from actually, violently fighting, he resisted, instead posting a Tweet attacking his vice president as a coward? Because if that’s the best evidence you have to show that this supposed “coup” went all the way to the top, well, we might as well impeach Richard Nixon while we’re at it.

The fact that they didn’t kill legislators and prevent the election’s certification is incontrovertible proof that there was never any chance of them killing legislators and preventing the election’s certification, which is incontrovertible proof that they weren’t even’t trying. This cannot possibly have been a failed coup, because it failed. Also, some of them wore costumes.

I think the real crime here is hypocrisy. How can we express support for Hong Kongers, for instance, who want to overthrow an authoritarian regime and install a democratic system, but freak out about Trump’s partisans, who want to overthrow a democratic system and install an authoritarian regime? They’re exactly the same thing! They both involve the word “overthrow.”