On peacekeeping, Canada is failing the global community

Opinion: Canada's levels of global military contribution are at their lowest point since 1956—and conditions suggest that may not change soon 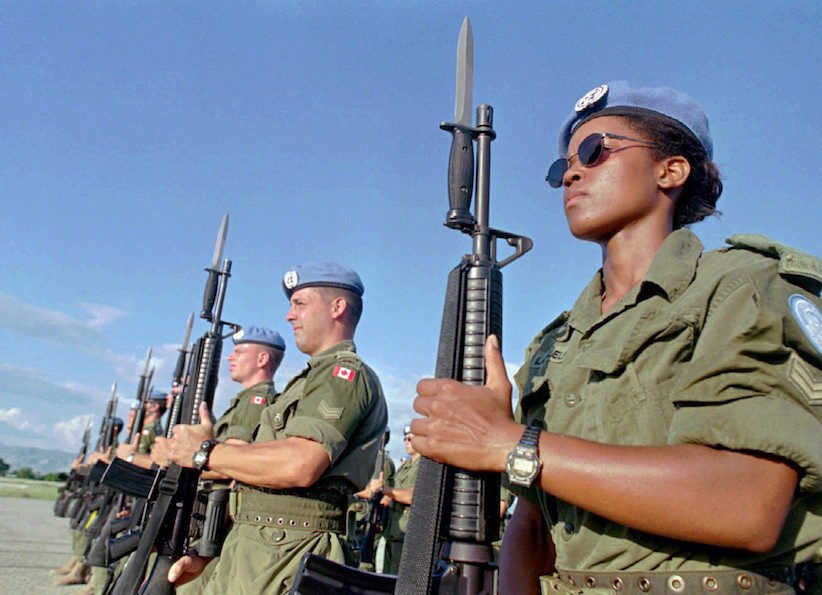 Canadian Peacekeepers prepare for a parade at Maple Leaf Camp in Port-au-Prince on Nov. 28,1997. (Daniel Morel/CP/AP)

General Jonathan Vance, Canada’s chief of defence staff, has a confident and relaxed way about him. But when he opened the second day of the Conference of Defence Associations in Ottawa last week, and then answered questions from reporters on the country’s peacekeeping operations, the tone seemed wrong for the moment. “The UN has spaces available for nations to contribute to, should they wish. We understand what those spaces available are,” said Gen. Vance, adding that the government is in preliminary stages of planning such a deployment. “We are in what I would call the planning stages to deploy forces. We’re trying to match best fit to best missions with the capability that we have. So it’s a work in progress, but it’s going well.”

The optimism of that tone came in stark contrast to the many speakers who highlighted the government’s failure to carry through with a 2016 pledge to deploy up to 750 personnel on international peacekeeping missions in addition to the 112 that were deployed at the time of the announcement. The most recent figures from the United Nations show that Canada’s commitment has reached an all-time low, and now stands at just 43 peacekeeping personnel at present. This represents the lowest number of uniformed personnel and lowest global military contribution for Canada since 1956.

The Liberal government maintains that it is merely awaiting the right opportunity to deliver on 2016’s promises. Gen. Vance’s suggestion that Canada is in the “planning stages to deploy forces” maintains the idea that the government is still searching for deployments that Canadian forces can support, and the Prime Minister’s own speech at the UN Peacekeeping Defence Ministerial in Vancouver in November 2017 outlined the need for Canada to deliver more. “We are making these pledges today, because we believe in the United Nations and we believe in peacekeeping,” the Prime Minister said at the time, as he called for a new era in peacekeeping.

But rather than delivering a reinvigorated peacekeeping effort, two years of handwringing by the Trudeau administration has seen Canada revert to a pre-Pearson era level of deployment. Experts agree that decision-making has become paralyzed and that the Liberal government seems reluctant to follow through on its promises. “Canada has let the UN down,” said Dr. Walter Dorn of the Canadian Forces College. “If you actually look at the pledges, we would have more than 750 uniformed personnel and we’re down at an all-time low. It’s a disappointment and at this point, you could say it’s a broken promise.” Dorn puts the blame at the desks of the most senior figures in the current administration: “I think it’s at the cabinet level: the Prime Minister, the defence minister and the foreign minister just haven’t got their act together.”

Even more disappointing is that the original troop pledge was sold as a sign of Canada’s commitment to the international community. “This government came to power with the promise of doing real peacekeeping and then has repeatedly told the UN and lots of countries that might want to vote for Canada for the next security council seat,” said Stephen M. Saideman, the Paterson Chair in International Affairs at Carleton University.

While many of the conference attendees condemned the low number of peacekeeping personnel being deployed, there was disagreement over how Canada should move forward. Dorn suggested that operations in Africa could be more palatable, pointing out that peacekeeping operations in Mali are less dangerous and less expensive than most people perceive. “The fatality rate is a factor of five less in Mali (when compared to Afghanistan), and the type of equipment you need is less expensive, and the UN pays back a substantial portion of your costs,” he said. But Saideman thinks that missions in Africa would prove challenging for Canadian forces. “As far as I understand it, most of the places that Canada would be asked to go in Africa are actually quite risky. The Japanese have pulled out of South Sudan because it’s falling apart. The DRC—600 troops would be a drop in the bucket. The people that I know that have gone to Mali suggest that it’s a counterinsurgency war, it’s not a peacekeeping campaign.” Saideman added that Canada already missed an ideal opportunity: “If I was advising the government I would’ve told them to go to Colombia last year, because I think that would’ve been a far less risky endeavour, but that would have made a contribution.”

If the government is going to continue to wait for a less risky peacekeeping opportunity, then there might not be any decision in the near future. If Colombia was the ideal deployment, as Saideman suggests, then it is unlikely Canada will find something suitable in the current trouble spots of the world. Trudeau and his cabinet have made numerous pledges of peacekeeping to the international community but those promises will fall on deaf ears, particularly to countries such as India, Pakistan, and Ethiopia who contribute thousands of troops to UN missions. It will likely come down to voters at home as to whether or not the government should take its pledges more seriously.

With such a low number of peacekeeping personnel on operations, it is hard to believe the government can ignore the glaring contradiction in rhetoric versus action for much longer. If Canada truly wants to contribute to peace operations on a meaningful scale once again, it comes with an inherent risk. While there may be some missions that are better suited for Canadian expertise and equipment, it’s clear that the government has given every option some consideration over the last couple of years—but any further delay clearly rests on the desks of the foreign and defence ministers, as well as the prime minister.