On the case of Erin Weir, Jagmeet Singh has done everything right

Tom Parkin: The talk radio speculation and misplaced attacks on the NDP leader show the fragile gains of the #MeToo movement 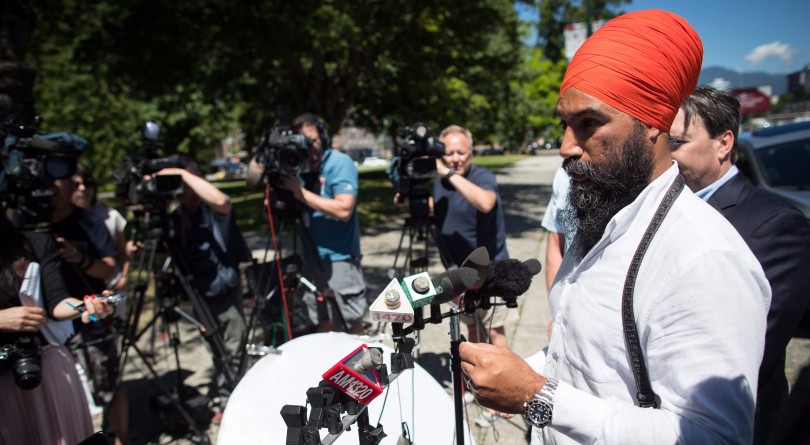 It’s always easy to demand the release of a report when you know it never can happen. You can sound like a victimized soul who just wants the truth to come out.

But you never have to worry it will.

That advantage is being used by Saskatchewan MP Erin Weir, who was recently expelled from the federal NDP caucus following a sexual harassment investigation and report.

And it’s an advantage everyone should think very carefully about. Engaging it could undo some of the fragile gains of #MeToo.

The report is confidential. Just Weir and NDP leader Jagmeet Singh got a copy. Singh only revealed the findings—one incident of harassment and three of sexual harassment—necessarily leaving blank the details of the incidents.

That has given Weir the chance to fill in those blanks.

The NDP leader has taken pot-shots over the confidentiality of the report, with others spinning conjecture about what it says. It’s the kind of gossipy politics the pundit panels and AM radio talk shows love.

But it was only last fall when those same shows and panels were full of discussion about harassment and sexual harassment in politics. Former political staffers of all parties shared hidden histories of harassment, especially between powerful older elected men and young women staffers. Over and over, pundits told political leaders to take steps to protect political staff.

Singh took those steps. Now, if those pundits are true to their word, they need to back him by refusing to join in the pot-shots, gossip and speculation about the contents of confidential harassment report they necessarily know nothing about.

READ MORE: Jagmeet Singh has a lot of work to do

Almost any person who’s been active in their union or worked in management understands how this works. If the employer is going to thumb-tack the text of a harassment or sexual harassment investigation report to the workplace bulletin board, it will be the very rare victim who ever steps forward with a complaint. And harassers and sexual harassers won’t stop.

For all these reasons, confidentiality of harassment investigations is embedded in our laws.

If pundits and talk shows want to erode those protections, they can continue to raise suspicions and conjecture about things they know absolutely nothing about.

It’s understandable that, in a society that eats up tell-all books and has an important tradition of open courts, confidential investigations rub the wrong way. We don’t allow star chamber justice. There is a tension. It’s relieved by due process. Not speculating.

On becoming aware of concerns, Singh brought in a qualified investigator—in this case a University of Ottawa law professor who is also a Vice-Chair of the Human Rights Tribunal of Ontario.

Anyone with a concern could confidentially report it. Some of Weir’s supporters have called this a “fishing expedition”—though why anyone should be blocked from raising their complaint of harassment and sexual harassment is hard to fathom.

And nor is every response to a finding of sexual harassment the same. Some incidents may be a firing offence. Others may result in a warning to change. Singh gave Weir a path back to caucus membership by accepting the findings and heeding some conditions. Weir rejected that path by lining up TV interviews and publicly complaining that one incident was “trumped-up.”

That sort of claim must necessarily go unanswered. Because if workplace harassment and sexual harassment are really going to be ended—not just for political staffers, but in workplaces everywhere—the details will not be broadcast. Sorry, AM talk shows.

Canadian politics has had a hard time adopting these basic ideas and protecting political staffers for whom the pundits expressed great concern a year ago. The Ontario Conservatives are yet to investigate the serious allegations against former leader Patrick Brown, choosing defenestration over investigation.

Now we have Jagmeet Singh taking a stand—at some political cost. Weir hasn’t accepted the outcome, even asking other men if they would “volunteer” to be subject to such a process. It’s not voluntary.

Condemning confidentiality or encouraging speculation based on one side’s claims cannot be allowed to become an AM radio discussion that undermines #MeToo gains. It won’t just hurt Singh. Or just women who work in politics. It will erode the workplace safety of everyone. Refuse to take part.

Instead, demand investigations. With qualified investigators. Defined terms. Findings of fact. Appropriate discipline. And, most of all, confidentiality. Or else #MeToo could take a big step back in every Canadian workplace.