Opinion: A reformed white supremacist on what's changed since she helped put the Heritage Front's leader behind bars, and how we can stop this sickness from spreading 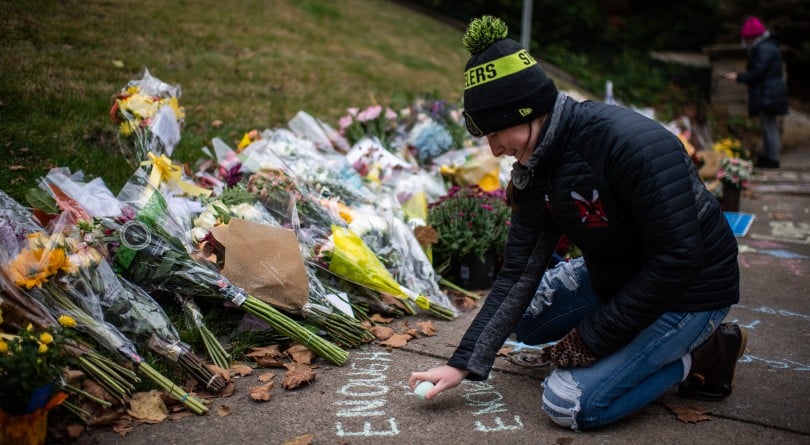 Ellie Fleischer, 15, writes a note on the ground at a memorial near of the Tree of Life Synagogue on Monday, October 29, 2018, in Pittsburgh, PA. (Salwan Georges/The Washington Post via Getty Images)

Elisa Hategan is an author, educator on extremism and radicalization, and a former member of the white supremacist group Heritage Front.

As Facebook and other social media outlets constantly work to defend themselves against interminable security breaches, data leaks or Russian hackers, they have failed to notice the most frightening virus ever to hit their platforms: Online hate.

Encoded with hyper-polarization and intolerance, this is arguably the most devastating virus to hit the internet, because instead of merely infecting hardware or taking a computer hostage, it worms through impressionable minds and alters perceptions of reality. It’s an open-source virus – anyone can add maliciousness to the malware, weaving in coded words like “globalists,” brackets that indicate (((Jews))), or numbers that stand in place for words, like 88 for “Heil Hitler.”

Worse yet, there are no effective programs to inoculate against the speedy and vicious damage caused to those who become infected and their communities. And you don’t have to look far to see evidence of its destruction: the Anti-Defamation League reported an unprecedented rise in anti-Semitic online attacks over the past year, news that came just one day before 11 people were killed by a gunman at Pittsburgh’s Tree of Life synagogue.

I know this virus firsthand. In January 2017, hours after I was quoted in the National Post on the subject of young, attractive women being used by the alt-right as recruitment bait, anti-Semitic messages and death threats poured in via Twitter, my Facebook page and even my website’s contact-me form. People using Pepe the Frog and swastika avatars had photoshopped my face in Nazi gas chambers or being dunked in vats of boiling oil.

The York Regional Police officer who took my report was sympathetic, but ultimately no charges were ever laid. As I learned the hard way, Canadian law is woefully unprepared for tackling cyber-crimes such as online harassment. Unless someone showed up at my door or verbalized a detailed plan to murder me, I was best to shutter my social media accounts and hope for it to blow over.

I also know this virus firsthand because, as a 16-year-old high school dropout in the 1990s, it infected me. I had been recruited by Canada’s then-largest white supremacist group, the Heritage Front, and quickly cast as a poster child. I wrote articles, spoke at every rally, gave press interviews, and recruited other young people to their ranks. Between 1991 and 1992, I worked for the world’s most notorious publisher of Holocaust-denial propaganda, Ernst Zundel. Within a span of weeks, I went from not questioning the Holocaust to being utterly convinced that it was a hoax and the world was secretly run by ZOG, a cabal of shadowy elites determined to snuff out the white race.

The media was the enemy, I was taught to believe. And because of the common right-wing trope that Jews run all media, those who are pitched into a frenzy by the idea of media bias have a singular target to point to: the Jews, of course. Too many immigrants? Blame the Jews. LGBTQ equality? Jews again, forcing homosexuality on God-fearing Christians.

It took two years and the Front’s escalation to violence before I worked up the courage to defect, testify against its leaders, and help to eventually shut down the group. I changed—I even discovered my family had Jewish roots, and I converted to Judaism.

READ MORE: Amid tragedy, we often find hope in our faith in civil society. That has to stop.

But that was the 1990s, a time before the internet, where you could throw a neo-Nazi in jail, put a racist publisher out of business, and dismantle a white-supremacist operation.

In a way, that’s simple compared to the challenges we face today, which is closer to a vicious game of Whack-a-Mole. For each “lone wolf” mass murderer sent to prison, the material that radicalized him is still available online, continuing to infect and radicalize others. Anders Breivik, the Norwegian neo-Nazi who massacred 77 people in Oslo and Utøya Island, and Dylann Roof, who murdered nine at Charleston’s Emanuel A.M.E. church, were both users of white-supremacist website Stormfront. Alexandre Bissonnette frequently scoured far-right sites like Breitbart News and Alex Jones’s Infowars for their anti-Muslim articles. Toronto van attack killer Alek Minassian pledged allegiance to the incel movement, an online community mostly made up of involuntarily celibate men holding deep grudges against women. And alleged Pittsburgh gunman Robert Bowers regurgitated his hate via Gab, a platform whose company reps defend with the statement “Words are not bullets”—even as Bowers’s words became bullets.

Up until their online hate became a real-life outbreak, these men were active participants in online communities where mutual hatred of Jews, immigrants, non-whites and women reached viral proportions. They were users of virtual worlds where thousands of hate-mongers congregate, feed into each other’s paranoia, share conspiracy theories in which they always play the victims, and proclaim every act of brutal murder committed by one of their own as a “red-flag” government attack. And there’s little that the law can do about it: police can’t do anything when it “merely” festers and multiplies on the internet, even as the line between online hate and real-world violence blurs to nearly nothing.

And that can make people mad. This is understandable: Hate is personal. This virus hits people at their core. It’s hard not to punch back.

In my work as a regional coordinator with Against Violent Extremism—a global network of former extremists and survivors of violence—my work has taken me to schools across North America. But all the students I spoke with, from Texas’s Rice University, to the ivy walls of Columbia University, to a first-year sociology class at the University of Toronto, their concerns remain pretty much the same: how do we stop the online hate and extreme polarization that’s spilling into physical-world clashes and attacks?

Violence isn’t the answer, I tell them. You can’t create effective change if you get arrested. Punching Nazis never turned anyone away from fascism; it gives the alt-right ammunition to claim that they are victims, that their “free speech” is being stolen. The long-term solution to fascism won’t be found in street fights, but in increased political engagement, in creating equitable policies in the system itself.

And part of that change does involve holding our noses and engaging in conversations that make us uncomfortable. It means challenging Uncle Bob’s racist tirade during Thanksgiving dinner; before you hit that Unfriend button, asking your sister-in-law why she posted that meme about George Soros. To not look away when we hear someone say something intolerant.

When it comes down to it, it’s quite simple: Nationalism cannot exist without fear—of losing, of others, of change. But to hate those who hate only emboldens the us-versus-them, black-and-white worldview that perpetuates extremism in the first place, and that’s the case both on the internet and in the real world. One-click solutions don’t work: you can’t fight racism by blocking a friend who makes a racist comment. It makes you feel better, but changes nothing. And most importantly, you can’t inoculate yourself against the virus of online hate by absolving the social media platforms that germinate its toxic consequences.

Until we hold the companies that choose to turn a blind eye to hate propaganda responsible for the deadly consequences of hatred masking as “free speech,” we will remain a step behind those who seek to infect the world with their intolerance. Because it really is a virus, both online and off—and we have to do something about both.