Ontarians, we're all living in a Dukes of Hazzard show now

Stephen Maher: The hit 1980s show is back—only this time it's reality TV, and Ontario premier Doug Ford is the star 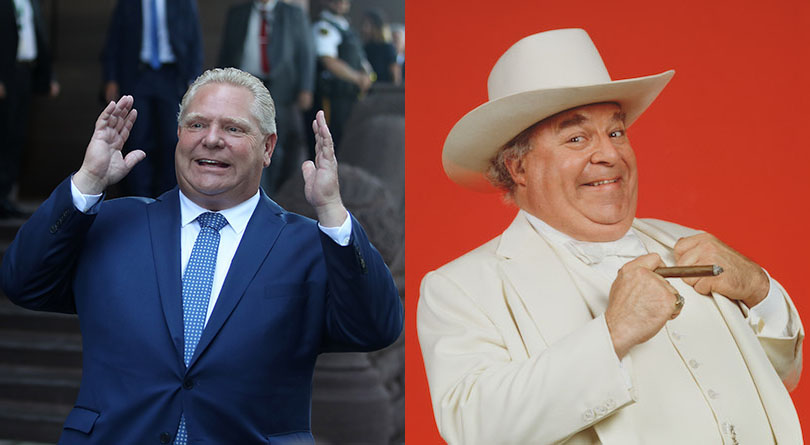 Lately, whenever I see Ontario Premier Doug Ford on TV I think of Boss Hogg, the villain in The Dukes of Hazzard, a TV series that was popular in my youth.

Boss Hogg was a larger-than-life loudmouth, the sole lawful authority in Hazzard County, a self-dealing villain who was always out to get the good-hearted moonshine-running Duke brothers.

Boss Hogg’s only redeeming feature was his incompetence, which allowed the Duke boys to get the better of him every week, often leaving him in a manure pile or some other undignified position while the Dukes sped off in their souped-up Dodge Charger.

Many of Boss Hogg’s unethical plans came apart when his flunky, Sheriff Rosco P. Coltrane, his naive and bumbling sidekick, somehow messed up, allowing the Duke boys to get away.

RELATED: Premier to Ford Nation: You voted for this, and eventually we’ll tell you what ‘this’ is

Rosco came to mind this week when Ford made his friend Ron Taverner the commissioner of the Ontario Provincial Police, while denying that he had any role in the process.

Taverner is no Rosco Coltrane, of course. He has had a perfectly fine 50-year career on the Toronto Police Service, but his appointment is such a bad idea that I am filled with wonder at the crude thinking that brought it about.

Police have a monopoly on the lawful use of violence. They are uniquely empowered to stop citizens on the street, snoop on their phones, search their cars, homes and offices, arrest, prosecute and lock them up. Because of that, we cannot afford to have the slightest question about what motivates them.

But there are plenty of reasons to worry about what motivates Taverner, particularly in the very sensitive political files that are waiting on his desk at the OPP’s headquarters in Orillia.

Taverner must be very grateful to Boss Ford for arranging his late-in-life rise to prominence.

Ford told reporters that he had nothing to do with the decision, but there is no reason to give that statement any weight. He and Taverner are old friends, which raises questions about Taverner’s judgment, given that Ford’s brother was the subject of repeated high-profile police investigations. The Toronto Star reported that police brass did not ask Taverner’s officers to play a role in that investigation although it was taking place on their turf, and Taverner backed a a casino project at the Woodbine Racetrack that the Fords were pushing. Boss Ford says that the committee that selected Taverner was independent, but two of its members report to him and the third was a hired headhunter. Ford did not recuse himself from the cabinet decision to appoint Taverner. And Taverner only qualified for the appointment because the job requirements were mysteriously lowered.

We learned later in the week that Taverner lives in a home that he bought from a Ford associate in a private sale. Why did Taverner get the job?

It does not seem to be as a result of his academic qualifications, which do not compare favourably with his predecessors, or his management experience, which wouldn’t seem to provide him with the experience necessary to run an organization with 7,383 employees, a $1.1-billion budget and serious challenges providing services in remote and Indigenous communities, subjects that Taverner will need to quickly master.

He will also need to study up on the best way to handle sexual harassment complaints from dozens of members, preferably without telling any of them to have a “tough skin,” which he is alleged to have told a female officer who reported to him.

The one obvious thing going for him in the competition was his close friendship with Ford, which raised questions during the police investigation into Rob Ford.

The long friendship between Ford and Taverner is now a matter of urgent public concern, given the enormous power the two men wield and the potential for serious conflicts of interest.

Consider the important role that the OPP played in the prosecution of David Livingston, Dalton McGuinty’s chief of staff, who was sentenced to four months in jail for illegally deleting email records related to the disastrous billion-dollar decision to cancel two gas plants in the middle of an election campaign.

Boss Ford has only been in office for five months, but he is accumulating scandals quickly enough to warrant comparison with the 15-year Liberal regime he ousted, incurring steep costs by forcing out people he doesn’t like.

Getting Alykhan Velshi pushed out of Ontario Power Generation only cost $500,000, but forcing out the CEO of Hydro One messed up the planned acquisition of a utility in Washington State, which will cost $185 million.

With these kinds of moves, Ford seems to be trying to wrest control of arm’s length bodies staffed by qualified people and replace them with loyalists, treating Ontario as if it were Hazzard County.

Given his seeming disinclination to properly consult with lawyers before he tears up contracts, he may end up violating some law he doesn’t know or care about—like the record-retention law that Livingston violated—and the file may end up on the desk of Sheriff Rosco P. Taverner.

Taverner can either refuse the job or accept that he will always be viewed with deep suspicion.