Ontario's first Green Party MPP: Why even a single voice is important

Opinion: Mike Schreiner on why he ran as a Green MPP in Ontario's election, despite the odds—and why, with his caucus of one, he remains optimistic about change 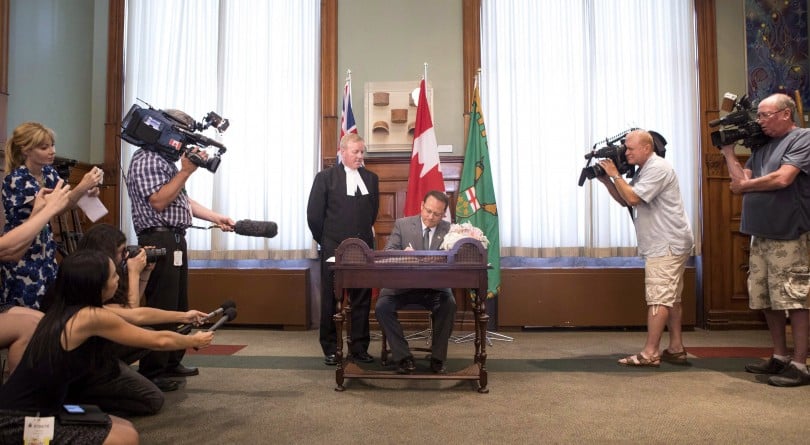 Mike Schreiner, centre right, Leader of the Green Party of Ontario, is sworn in as an MPP during a ceremony at the Ontario Legislature, in Toronto on Thursday, July 5, 2018. THE CANADIAN PRESS/Chris Young

Mike Schreiner is the leader of the Green Party of Ontario.

In my riding of Guelph, a constituent recently stopped me to ask a question that I expect I’ll keep hearing: What difference can one MPP really make?

In today’s political world, where power is centralized in leaders’ offices and votes are whipped so frequently, it is easy to assume that a single politician is powerless against a majority government.

But that assumption is incorrect.

There are now eight Green politicians represented in federal and provincial legislatures, and they are having an impact across the country. Elizabeth May has been recognized by her peers as the hardest-working MP and Parliamentarian of the Year, and has been a crucial voice for civility in the House of Commons. The PEI Greens are causing waves in the small island province, doubling their caucus in the last year and polling neck-and-neck with the governing party heading into the next election. In New Brunswick, David Coon has passed four major pieces of legislation, including an MLA code of conduct. There are three Green MLAs in British Columbia engaged in a confidence and supply agreement with the minority NDP government, holding them to account on important promises like electoral reform and pipeline construction.

And now, I am so thankful to the people of Guelph for putting their trust and confidence in me and doing what hasn’t been done in more than 70 years—electing a fourth party to Queen’s Park.

MORE: It’s hard being an independent at Queen’s Park—and the Liberals will effectively be that. Should the Tories lend a hand?

Running as a Green is not the easy path to being elected. But taking the right road is more important to me than choosing the easy road. And to me, that’s about choosing to do politics differently. It’s about putting honesty, integrity and people ahead of political self-interest, lobbyists and donors. It’s about fighting for a livable future for my two daughters.

Many political pundits told me that Greens would never be elected because we are too honest—like our controversial position that we should pay for transit through road pricing in Toronto, a model recommended by experts and one that has worked in other major metropolitan centres. But I believe this honesty is why we achieved an historic breakthrough in Guelph. We did not shy away from tough, honest conversations.

It is that same commitment to honesty that has motivated me to stand up to the nuclear lobby and call for the closure of the Pickering nuclear plant, which will cost the province $1.1 billion per year to keep open. Wasting money to keep outdated nuclear plants alive is the main reason electricity prices are increasing, not renewable energy, as the new Premier would have people believe.

During the campaign, some of these difficult topics came up while we were door-knocking, including a memorable exchange I had with a diehard Leafs fan about road tolls. Initially, he told me he could never vote for a party that would charge him to drive to a Leafs game. I thanked him for his frankness and moved on. After I finished knocking on the rest of the doors on his cul-de-sac, the man called me back to his door. He told me that he wanted a lawn sign and that he was voting for me. He still disagreed with road tolls, but I had earned his vote by giving him the courtesy of an honest position.

Now that I have shown people that a Green politician can be elected in Ontario, I move onto the challenge of demonstrating what one MPP can accomplish.

For this I can point to my record outside of Queen’s Park. I started one of Ontario’s first local organic food businesses outside Guelph 23 years ago, when most people had never heard of organic food; today, local sustainable food is readily available in communities across Ontario. And a few years ago, I led the effort to get big money out of politics, sitting down with all party leaders, including former premier Kathleen Wynne, NDP leader Andrea Horwath and then-PC-leader Patrick Brown, to advocate for lower donation limits and a ban on corporate and union donations.

It was our collective willingness to work across party lines that got this legislation passed. Even one voice, giving the courtesy of an honest position and believing in what’s right, can make a difference. It’s what I hope to bring to Queen’s Park.

Already, the Ontario PC government has moved swiftly to dismantle climate action, from ending pollution pricing, cancelling 758 renewable energy contracts, shutting down energy efficiency programs for homes, businesses and schools, and vowing to fight a losing court battle against the federal government. These decisions are bad for our environment and they will cost the people of Ontario financially.

Some have questioned whether it is worth the effort to push Premier Ford on climate change. But I will not give up. I will remind the Premier at every opportunity that we can put a price on greenhouse gas pollution, while returning revenues directly to people’s pockets and creating jobs in the $7 trillion clean economy. There is common ground if the Premier is willing to dig deeper than his campaign slogans.

In the first few days of the new session, I have glanced up at the public gallery, thinking about the many years I spent as an observer of Question Period. It reminds me that despite all the odds and the barriers in the way, our democracy can only be strengthened by having more voices at the table. I am so grateful for this chance to bring the Green voice to Queen’s Park. Even one voice can make a difference.