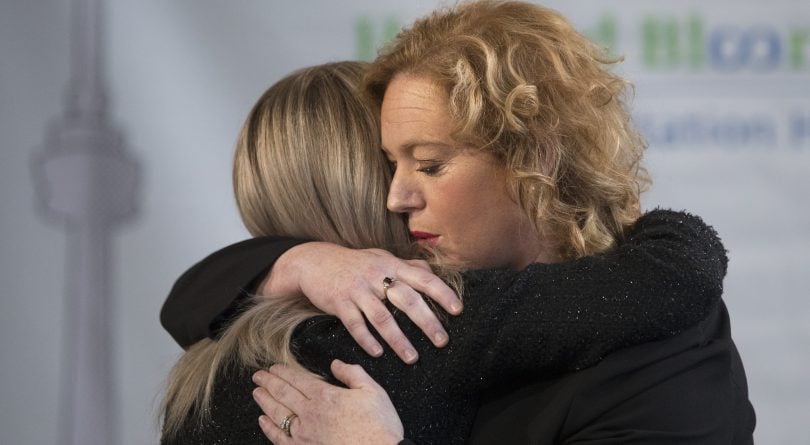 Lisa MacLeod, right, Ontario's Minister of Children, Community and Social Services, hugs her Parliamentary Assistant Amy Fee, who is a mother of two children with Autism, during an announcement in Toronto, on Wednesday, February 6, 2019. (THE CANADIAN PRESS/Chris Young)

There were many cries for Ontario’s Children, Community and Social Services Minister Lisa MacLeod to resign this week, following the Ontario Association for Behaviour Analysis’s (ONTABA) revelation that the minister and her staff had attempted to extort the agency’s public support. The minister, ONTABA says, demanded that the group blurb the Ontario Progressive Conservatives’ new autism program, the details of which they had not yet seen.

“Endorse whatever thing is in the mystery box!” is always going to be a tough sell. This may explain why, according to ONTABA, a caveat that failure to publicly embrace the plan “would result in ‘four long years’ for the organization,” accompanied the request. “The minister also indicated that if a quote of support was not forthcoming, a communication that behaviour analysts are ‘self-interested’ would be released from her office.” Later she did just that on the radio.

“This was more akin to meeting with a mob boss than an elected official,” Louis Busch, a past-president of ONTABA, who was at the last meeting, told the Toronto Star, and it does feel as if I’ve seen this movie. I’m half expecting a “For immediate release on this, the day of my daughter’s wedding” message to come in any time now.

A “Now you come to me and say, give me the support I need to safely and productively care for my child! But you don’t ask with respect” announcement might come next. Maybe “That’s a nice little non-profit org you’ve got there, it’d be shame if something were to happen to it.” So far nothing piscine and gruesome meaning, “Your hope for an evidence- and needs-based support model for autistic people in Ontario sleeps with the fishes” has arrived, but this thing ain’t over yet.

I’m already trying to picture what kind of threat will accompany the Ontario PCs’ demand that the Ontario Nurses’ Association back the provincial government’s plan to keep all Ontario children safely locked away in lead-lined boxes where the deadly extraterrestrial radiation they emit can’t harm the premier.

It is possible that Ford meant “kryptonite” in the more usual, metaphorical way. Perhaps these children genuinely move him to the point he can hardly bear to even hear about the file. On the other hand, in 2014 Mr Ford told the father of an autistic child to “go to hell” and accused the man of participating in a “jihad” against him because the father had filed an integrity complaint over reports that then-city councillor Ford had claimed, without evidence, that a group home for autistic children had “ruined the community.”

Ford’s history on the matter indicates the “radioactive nine-year-olds” interpretation is likely closer to the truth.

Under the government’s new plan, families with autistic children would receive up to $20,000 a year until their child turns six. Some children are not diagnosed until after they are six, and after six the cap would drop to $5,000 a year until the child turns 18. A child’s age and the parent’s income will determine the level of funding, which many people informed on the matter argue should be determined by the individual child’s need for therapy. The needs of children on the autism spectrum vary enormously and, advocates say, appropriate therapies can cost as much as $80,000 per year (many parents have the receipts).

What the changes would do is allow the provincial government to boast of clearing a wait list of 23,000 children currently seeking treatment. It would earn these bragging rights by providing a lot less treatment to more children. Many children will have the treatment they sat on a list so long to get pulled right out from under them and, according to Ms. MacLeod, anyone looking for more funds for the long-underfunded program is basically—wait for it—shaking down battered women, you monsters.

“So where do I take the money from? Is it from the violence against women shelters? Is it from the refugee…” the Minister of Not Entirely Comprehensible but Nonetheless Vaguely Threatening Non Sequiturs told CBC-Radio’s Craig Needles Show on Thursday.

For his part, Doug Ford left the women escaping domestic violence out of it, opting instead to try and pit Family With Autistic Child against Family With Autistic Child. Jill Breugem, whose 10-year-old son Alex has autism, appealed to the premier by explaining, “By you taking away his therapy he’s not going to be able to communicate.” Mr. Ford apparently responded to this attempt to put a human face on the issue by saying, “Oh, so let me get this right, you’re one of the ones getting therapy right now. You’re one of the 25 per cent, what about those other parents?”

I suspect this war between the families will be a non-starter for the Ford government. These families are too tired and busy to “go to the mattresses.” Many of them wouldn’t recognize their literal mattresses. These parents are already going to second jobs to pay for going to sit in waiting rooms, to stare at more bottles of hand sanitizer at a receptionist’s desk, to fill out yet more forms, and to see the faces of other parents who are familiar with, if not the exact terrain, then the planet they live on.

These parents aren’t fighting to get to an all-inclusive resort. People are just trying, and have been trying for a long time, to get access to the therapies that will set their children up for a better life, something that ultimately benefits all of us. Odds are very high these parents are, by necessity, tougher and more cohesive than any other group a government will encounter. These aren’t people I’d respond to with: “Don’t ever take sides with anyone against the minister of children, community and social services again. Ever.” And yet that’s how the Ford government has opted to handle this file.

Last week, Ms. MacLeod retweeted Sun columnist Joe Warmington’s demand that the “reporters should test the authenticity. Names etc.” of those protesting the changes because “if those were angry parents,” Ms. MacLeod and Mr. Ford “are the type to take note and listen to them. But these people didn’t want to have a conversation.”

In seconding Mr. Warmington’s tip of his tinfoil hat to her efforts, Minister “I’m gonna make this non-profit an offer they can’t refuse” MacLeod was actively seeking to delegitimize unhappy parents of autistic children, advocates for some of the most vulnerable among us, and this seems to have been a concerted effort. When in response to the new autism plan which he called “indefensible” and “absolutely wrong-headed,” Bruce McIntosh, a staffer for Ms. MacLeod’s parliamentary assistant, resigned from his position, her chief of staff, Tim Porter, tweeted that this was a “political stunt by a professional protester.”

Of course, it’s not as if the presence of educators, therapists, relatives, friends and autistic people themselves at a protest over the funding changes make the outcry less meaningful. It is more than OK to have allies and endorsements for your cause, provided those involved know that they supposedly endorsed your cause.

This was notably not the case with Autism Ontario, which responded to the news that Ms. MacLeod counted them among the supporters of the province’s plan with the following statement: “Autism Ontario neither proposed nor endorsed the announced changes to the (Ontario Autism Program) and is concerned about the impact these changes will have on children and families accessing the program.”

I’ll leave it up to the reader to determine whether attempting to bully organizations into endorsing your plans is better or worse than just claiming they endorse said plans anyway.

On Thursday night, Ms. MacLeod up and tweeted, “It’s been an emotional time.
Throughout this process my focus has always been on the 23,000 children who were abandoned under the previous government’s plan. This is an issue I take very personally and I apologize if my comments made anyone feel threatened or uncomfortable.”

Given what the plan actually offers these 23,000 children, which is next to nothing, ever, given the manner in which Ms. MacLeod has conducted herself in trying to get this plan into place, given the “if” in that tweet, I have to rank her statement up there with Mr. Ford’s 2014 opus: “My heart goes out to kids with autism,” to which he added, “But no one told me they’d be leaving the house.”

In terms of pure insincerity, I’d say the two are tied and—I go back to The Godfather—both are on par with “Come on, you think I’d make my sister a widow?”