'Our generation put a man on the moon. Millennials invented avocado toast and the selfie'

Letters to the editor, March 3, 2020: Readers weigh in on the new generational blame game, the quandary of equalization reform and the end of capitalism 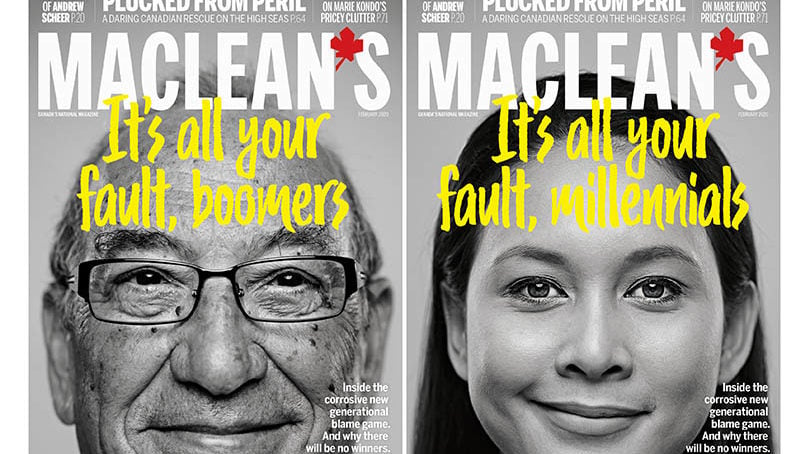 I am so weary of the labelling of generations today and the whole blame game. We all move from one age group to another and don’t stay in those labelled boxes. I see it more as the differences in the stages of our lives. I’m sure that my 50-year-old children are much like I was at that age. In any case, the basis for the success of any generation or any other group of people is the desire to share our different points of view while trying not to judge each other. We simply have different perspectives, skill sets and experience levels. Old people are not dumber than young people. They are exposed to the same things as young people but happen to have more perspective. A four-year-old can often teach an adult as much as the other way around, but that doesn’t mean the four-year-old knows everything already. But it seems to me that the truly valuable people are those who listen to and consider what others have to offer and who are constantly thinking of ways to help their fellow human beings. But this labelling of generations is what makes younger people completely discount what older people have to say.
—Hilda J. Toews, Burlington, Ont.

As I read the series of essays about each generation, I kept thinking “What about us?” Now in my 85th year, I think that my generation (born before the end of the Second World War) should have had an article about us, too. I found two cursory references to the Greatest Generation and one to the Lost Generation. We grew up during one of the most terrible wars in history and this had a profound effect on us. Then we witnessed the social upheaval of the 1960s, during which the boomers, the generation we had spawned, seemed to lose all sense of the values and traditions we had tried to pass on. Of course our opinions changed as we grew older, and it has been beneficial, and in some ways a privilege, to have lived through all the social and technological changes of the past 60 years. But please give us our platform, too.
—Pamela Welbourn, Gananoque, Que.

Our generation put a man on the moon. Millennials invented avocado toast and the selfie.
—David Loewith, Lynden, Ont.

In November, Contributing Editor Stephen Maher wrote about the perils of viewing Canada as a piggybank that some provinces shovel money into and from which others only make withdrawals.

I just read Stephen Maher’s article and I wholeheartedly agree. Too many Albertans think that, because they have the luck to live on top of valuable resources like oil and gas, they shouldn’t have to share the wealth with other Canadians. Too many self-serving and short-sighted politicians whip them into a frenzy on the subject. When we moved to Alberta almost 50 years ago, the population of the province was less than a third of what it is now. Now, more than half of Albertans don’t originally come from here. Alberta has greatly benefitted from their education, skills, energy and experience. I am one Albertan who gladly shares the wealth of our resources, which I have had no share in creating and therefore don’t deserve, with my fellow Canadians in other parts of the country.
—Marshall Hoke, Yellowhead County, Alta.

Maher completely missed the point of what is behind the frustrations of Alberta and Saskatchewan. The mechanics of how the program works is irrelevant. The fact is that Alberta and Saskatchewan pay more per capita to Ottawa than Ottawa spends in our two provinces. I think the average person in both provinces traditionally has been content with the notion that we are one country and we should pull together in an effort to bring everyone up to the same standard of living. If that means some money moves from richer provinces to ones that are not quite so well off, so be it. But all bets are off when we stop “pulling together” for one another; for example, when a beneficiary province actively undermines the economies of contributing provinces by criticizing and openly opposing policies that would benefit the cornerstone industries of those contributing provinces. Our current issue is largely with Quebec because it is based on the belief that you shouldn’t bite the hand that so generously feeds you, especially with the unrelentingly aggressive rhetoric from Yves-François Blanchet and François Legault. If we could restructure equalization so that it more accurately recognized the economic advantages bestowed on Quebec by its hydroelectric power resources and required provinces to stop standing in the way of matters of federal jurisdiction that have been judged to be in the national interest, then we might not have an issue. But when Ottawa stonewalls any attempt to review equalization, our issue with Quebec unfortunately becomes a national one. And that then fuels Western separatist sentiments.
—Michael Allen, Calgary

It was refreshing to read Maher’s article, because there has been much talk by certain politicians about the resulting inequality. We hear from Alberta’s premier about that province’s financial problems and who is to blame, but he doesn’t mention that Alberta doesn’t have a provincial sales tax (PST), while every other province has a tax of between six and 10 per cent. What would have been the situation during the many good years if there had been a tax? If Albertans don’t want taxes, there are consequences! The high incomes in Alberta contrast with the lower incomes elsewhere, so a PST would have made a huge difference in that province.
—Gordon Haggert, Windsor, Ont.

Alberta’s troubles are not about the oil-price shock. While that is what initially caused the economic downturn in 2014-2015, the oil price is over $50 a barrel now. Alberta has made plenty of money at this rate in the past, and most other oil-rich areas (especially the U.S.) are making plenty of money at this price at the expense of Alberta, because of pipeline policy in this country. Our federal and provincial governments have hurt Alberta’s ability to compete with other global markets by not allowing us to ship our resources overseas. Other provinces hypocritically buy imported oil, yet claim to want to address climate change. If you’re going to continue to burn fossil fuels, why can’t you burn Alberta oil?
—Don Pasquini, Calgary

Forest for the trees

In January, Associate Editor Prajakta Dhopade wrote about a heartfelt protest to save the Clack Creek Forest on B.C.’s sunshine coast from a logging project.

I was disappointed by the lack of balance in your article about logging in Clack Creek Forest on B.C.’s Sunshine Coast. In the 1990s, the B.C. government reviewed the area currently proposed as a park by interest groups; the study concluded with the establishment of three park areas on Mount Elphinstone in June 2000. Decisions to establish protection, such as a park, need to be made as part of a larger-scale process that considers the range of interests and values on the landscape, and not just those of a specific interest group. We’ve met with this group of concerned individuals to look for a viable solution, but they are unwilling to compromise. The B.C. government agency, BC Timber Sales, has implemented several management approaches in response to concerns raised, including reduced harvest sizes, increased wildlife retention areas, the management of rare and endangered plant communities, and more. The matter also went to judicial review and no concerns were raised. The timber harvest in this area will support local employment and provide over $2 million in stumpage revenue, which will assist, for example, in the provision of health and education services for British Columbians.
—John Allan, Deputy Minister of Forests, Lands, Natural Resource Operations and Rural Development, Victoria

In January, Editor-At-Large Scott Gilmore urged Canadian politicians to embrace shame, a trait found in little supply in the parliaments of the nation.

I could not agree more with Scott Gilmore. Over the past number of years, I have come to believe that the prime talent of a successful politician is their inability to blush even in the face of the most outrageous lies. I am long past feeling outrage at the wild and irresponsible utterances of the political class and have come to regard them, for the most part, with disdain. The electorate, through the lies and exaggerations of politicians, is becoming disengaged from the political process and I believe that this accounts for the alarming decrease in people who vote at election time. If our politicians want the people of Canada to become more engaged in the electoral process, they might try telling the truth and dealing with us with honesty. It would be refreshing to have our political leaders do what’s best for the country instead of what’s best for politicians, for a change.
—Barry Imhoff, St. John’s

In response to Gilmore’s article concerning people in public service who lie and feel no shame, I would simply ask this question: Are ethics courses taught in university? I am surprised that he is making such a big deal about this matter. Today, politicians will simply say that they misspoke when their untruth is discovered. I agree that “we need people in power who are afraid to lie to us.” The reality of Canadian politics is that Prime Minister Justin Trudeau said he would give the people what they want, which means he has to tell them what they want to hear. His greatest interest is his own interest. His example becomes the example to follow. The voting public knew all about his lies and misspeaking, yet they voted him back in, so I believe that Gilmore should address the public and ask why they accepted his behaviour.
—David Shantz, Montreal

In December, Contributing Editor Andray Domise wrote that capitalism can’t be saved as a force for good—or even as a neutral social arrangement—and that the political Left should abandon it.

We need to reform capitalism, not quit it. As Colin Mayer explains in Prosperity: Better Business Makes the Greater Good, today’s capitalism is only one form of it. Corporations have become primary drivers of both growing inequality and climate degradation. Their dominant legal obligation is to maximize shareholder profit. Mayer lays out how we can revise capitalism so it can become an effective mode of economic management in support of a positive way of sustainable civilized life. The main obstacle to this kind of reform is that a significant change to the laws that govern corporations would be required. We need political leaders at all levels who can not be bought and who are willing to learn about and implement those kinds of solutions.
—Douglas Moffatt, Leamington, Ont.

By recommending that it is time for Canada’s left to consider the lessons of the Communist Manifesto, Andray Domise has apparently forgotten his history, which records how Communist countries have fared in the last century. Communism is said to be responsible for the outright killing of tens of millions of its own citizens and the ruination of whole economies where it was embraced and enforced. All of the most free and democratic countries—and Canada is presently one of the best in which to live—have been built by capitalist systems regulated by law.
—Jerry Marek, Swan River, Man.