Stephen Maher: Outrage over Justin Trudeau has distracted from some worrisome moves Jason Kenney is making in Alberta 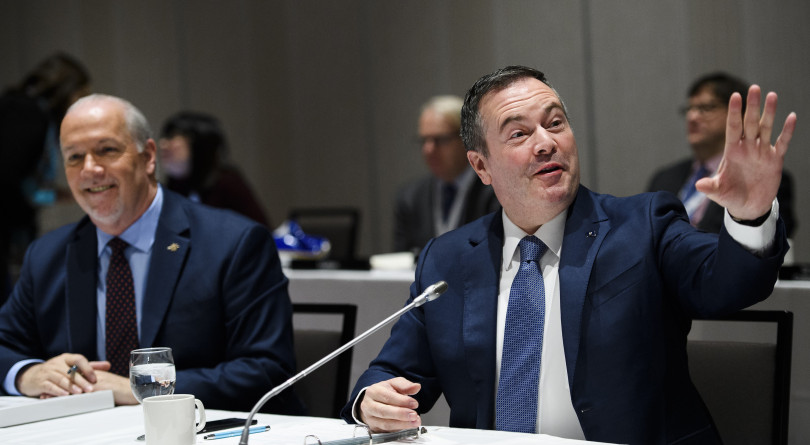 Kenney (right) and B.C. Premier John Horgan attend the Council of the Federation gathering on Dec. 2, 2019 (THE CANADIAN PRESS/Nathan Denette)

When Albertans elected Jason Kenney, they bought his argument that Alberta’s economic problems are caused by Ottawa, and gave him a mandate to fight Justin Trudeau.

The theory is that Trudeau, in league with foreign environmentalists, has stood in the way of pipelines, which has led to a discount for landlocked Alberta crude and caused capital to flee the oil patch, leading to a terrible economic crisis.

I think this theory exaggerates the impact of Trudeau’s policies, blaming him for economic problems caused by falling oil prices and growing aversion to “green risks” on world equity markets, which has driven global players out of Alberta.

You can tell this theory has problems because many of its exponents seem more angry than well-reasoned. They argue, for instance, that Trudeau spent $4.4 billion on the TMX pipeline as part of a super-secret plan to not build it, which only makes sense if you see Trudeau as a villain scheming to destroy Alberta rather than a vote-seeking politician.

But this strong feeling in Alberta that Trudeau is to blame for everything bad has created a powerful frame for Kenney to play the champion, and he has taken to the role.

READ MORE: In defence of equalization

Kenney has put on a pugilistic display, speaking out against Trudeau at every turn, and establishing a number of expensive machines for generating outrage—a $30-million oil-industry-promoting war room, a $2.5-million public inquiry into “foreign-funded campaigns targeting Alberta’s oil industry” and a bargain basement $650,000 panel to consider ways the province can get a “fair deal” from the rest of the country.

This seems like a waste of money and a distraction from the real issues Alberta faces, most of which are not of Trudeau’s making, and raises the risk that Albertans will be so engaged in the Kenney-Trudeau fight that they don’t pay attention to other things Kenney is doing.

Albertans would be wise, for instance, to keep a close eye on the changes to public-sector pension management included in Bill 22, an omnibus bill rammed through the legislature in three days while Kenney was conveniently out of the province.

The bill is best known for a clause that fired the independent commissioner of elections who has been investigating and penalizing officials caught up in the dirty-money “kamikaze” scheme that helped Kenney win his party’s leadership.

Alberta’s teachers, who have been managing their retirement savings independently from government since 1939, are understandably not pleased with this development, since they will now have less say in crucial investment decisions.

The teachers believe their plan’s return on investment is better than AIMCO’s, and they are afraid that Kenney, who is considering pulling Albertans out of the Canada Pension Plan, may be tempted to use AIMCO to funnel money to capital-starved Alberta petroleum companies.

“We’re really worried that they’re going to treat these huge pools of retirement savings … as monopoly money that they can play with to support some agenda that they haven’t articulated to the public but that might include making risky investments in what most people see as a sunset industry,” said Greg Meeker, former chairman of the teachers’ pension board.

Finance Minister Travis Toews says the province has no such plans, and only wants to move the teachers’ pension plan so that the province can save money on administrative costs.

Labour leaders were rattled, though, when former Wild Rose leader Danielle Smith speculated in a recent interview that it would be good for Alberta pensions to back the petroleum industry.

“I think that’s part of the reason why Albertans are looking at having their own investment fund,” she said. “They know that there’s a divestment mood in all of the pension funds across Canada, and internationally, and if CPP starts bailing out of energy resources, we don’t want to be in a position where our money is being used to support solar and wind or other experiments that the CPP—driven politically by a Trudeau government—might want to invest in. So I think this is going to be bigger conversation over the next year or two.”

The danger is that Kenney and his team may believe their own propaganda. If the oil patch’s business problems are the fault of a cabal of Alberta’s enemies, and the oil patch is being wrongly starved of capital, then maybe Albertans should invest in their own industries.

But Kenney says he wouldn’t dream of directing the pension fund managers at AIMCO.

“The mandate would be to maximize returns for pension beneficiaries, not engage in some kind of industrial policy,” Kenney said on Sunday. “It should never be given a political direction on how to invest money that belongs to pensioners. That would not be the point of this.”

Those assurances do not convince the teachers.

“When it comes to AIMCO, and these vast pools of other people’s retirement savings, it will be a lot easier for them to do that, because it’s not tax money,” says Meeker. “It won’t appear on their balance sheet. And that’s why I think it’s tempting for them to use the retirement savings of hundreds of thousands of people to play political games in terms of supporting their pet projects, because it won’t add to their deficit.”

And AIMCO’s CEO, Kevin Uebelein, sounded more like a politician than a fund manager when he announced a $1.15-billion investment in a bitumen pipeline in May, talking up the benefits to the Alberta economy.

“There have been some real headwinds against that sector, and lack of pipeline capacity to get to port or to other clients is one of them, so every time we make a step forward, whether that’s headway on Bill 48 or 69, or any announcement on the TMX … every positive step will have an automatic buoying effect across this industry in Alberta.”

AIMCO’s legislation contains a section that says the government “may issue directives that must be followed by the Corporation,” meaning this government, or a future government, could start ordering AIMCO around.

Pension expert Keith Ambachtsheer, of the Rotman School of Business in Toronto, says he doubts the government would do that, because independent board members could resign in protest.

He says AIMCO ought to be careful to resist the temptation of investing in Alberta’s oil industry, because if it the bottom drops out of the oil business, the last thing the province would want is a collapsing pension system.

“It’s a slippery slope,” he said. “It’s a double jeopardy thing. That’s the best way for Albertans to understand it. If you start to put pension money into your own industries, which are at risk, that’s a fundamental misallocation.”

I doubt Kenney would do something as reckless as investing Albertans’ pensions in the oil patch—or on a money-losing golf course, like a previous Alberta government did—but on the other hand, I don’t know why he didn’t just leave the teachers’ pensions alone in the first place, which is what he should have done.