Governments would love to put all the onus on individuals to stop the spread of COVID-19. Don't let them. 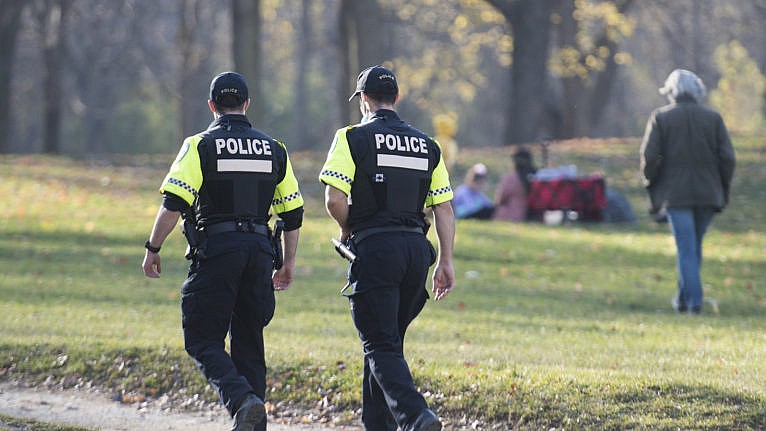 I remember feeling hope in the summer. Thanks to the leadership of Black activists following the police killing of George Floyd, “defund the police” went from fringe idea to mainstream rallying cry. The pandemic was raging, Donald Trump was still president, and things were still extremely, apocalyptically bad. But people with establishment liberal values appeared to be embracing exciting ideas.

In the spring, going for a walk in Toronto meant encountering groups of cops roaming the streets and parks, looking for social distancing infractions. As a former local news reporter, I’ve seen policing up closer than most, and that experience reinforced my lack of confidence in the institution’s ability to enforce the law in an equitable way in the absence of major changes. I’m white, which affords me a large degree of protection from the police. But I’m also visibly queer, and the ramped-up law enforcement presence made the anxiety of the pandemic a lot worse.

Now we’re in a second lockdown, with provinces across the country imposing new restrictions on individuals under the threat of massive fines and jail time. We know what happened when we imposed penalties like that in the spring: Homeless people, Black people, Indigenous people and other people of colour got ticketed and harassed, while police stood by and did nothing as huge crowds of mostly white people gathered at Toronto’s Trinity Bellwoods park. However, despite all the listening and reading about police brutality that white, middle-class liberals were supposedly doing during the summer, they’ve mostly embraced these new restrictions and penalties.

Opinions about how to manage the pandemic have hardened along partisan lines. To many on the left, one is either for restrictions—and therefore on the side of science, reason and expertise—or against them, and therefore an entitled troglodyte who cares more about the right to go for brunch than the lives of others. Somehow, blaming individual behaviour for a public health crisis has become a liberal position.

Countries like South Korea demonstrate it’s simply not true that we have to choose between mass deaths and heavy-handed law enforcement. If we had a functioning testing and tracing system, clear communications from public health officials and support to help people stay home, we could have our brunch and visits with grandma, and still keep virus rates low. The fact so many of us are once again in lockdown hell is the government’s fault, and we should be furious that our political leaders are forcing people to go to work in crowded factories, while threatening to fine them $10,000 if they have a family member over for dinner.

The liberal argument for focusing on individual behaviour to manage the pandemic goes something like this: poor and racialized people are much more likely to contract COVID-19 because their jobs and housing make it harder to physically distance, so people with the ability to stay home have a moral imperative to do so. Selfish people who refuse to miss out on parties and vacations are driving the pandemic and making a mockery of the sacrifices of others. It’s everyone’s responsibility to quarantine as perfectly as possible, and if some people are too ignorant, self-centred or brainwashed by right wing conspiracy theories to listen to experts, we need to force them.

Let me be clear: This is not an argument for “learning to live with the virus” and “opening up.” The government is right to close workplaces and indoor public spaces, although small businesses and laid-off workers should receive a lot more support. We all have the responsibility to isolate as best we can.

There are some truly selfish people out there, and shame has an important social role to play in keeping their behaviour in check. It’s OK to be mad at them, and I understand why people want to punish them. But we can’t indulge that impulse when we know what will happen in the real world. Thinking the cops are going to suddenly start applying the law equitably and stop the pandemic in its tracks by fining white, middle-class people hosting play dates and dinner parties is naive and dangerous.

We’ve already seen what’s going to happen in practice. When a white business owner opens a barbecue restaurant in Etobicoke, Ont. in flagrant violation of restrictions, police and bylaw officers are going to stand there and let him serve customers for a full day, ordering him closed and charging him only after facing a storm of public outrage. When a carpenter builds unsanctioned shelters for the homeless, or people operate a community fridge to help feed their lower-income neighbours, or worshipers go to temples during Diwali, they’re going to get shut down or ticketed. 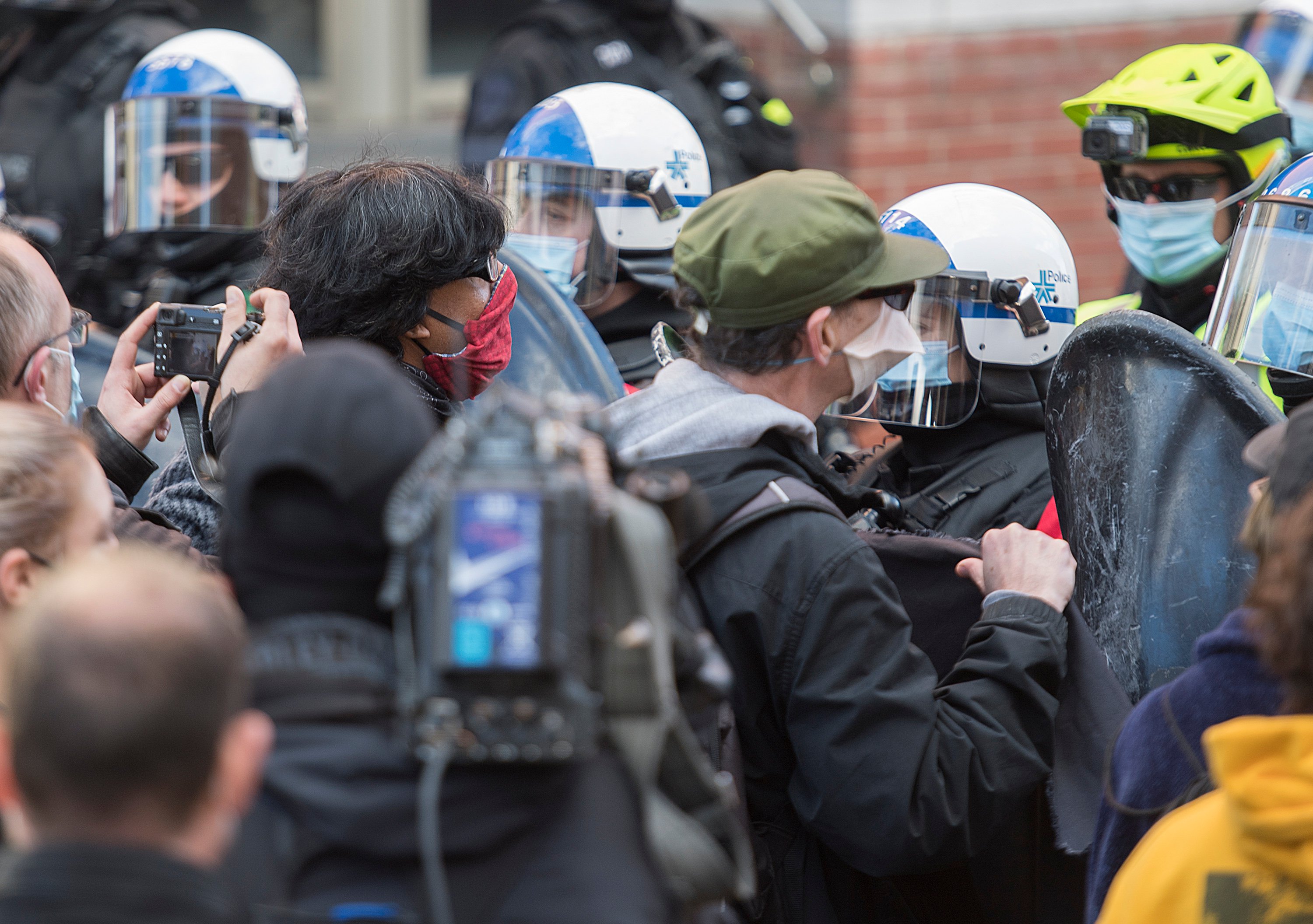 Protesters confront police during a defund-the-police demonstration in Montreal in October. (Graham Hughes/CP)

If fines and jail time for individuals violating COVID-19 restrictions must be available to authorities, they should be the absolute last resort. We are not anywhere close to exhausting our other options for slowing the spread of transmission.

In Ontario, manufacturing, agricultural and supply chain-related businesses are still allowed to operate at full capacity in the two Ontario regions in lockdown, despite data indicating industrial settings accounted for 22 per cent of outbreaks in Peel and 19 per cent of outbreaks in York. In Alberta, restaurants, bars and casinos are still open. We don’t have legally mandated sick days, or danger pay for in-person workers, or eviction bans—all measures that would help marginalized people stay fed, housed and healthy; and all policies that are a much better fit with left-wing values than increased policing.

Our elected leaders have also failed to communicate clearly to the public what they want them to do. Having one set of laws and a different set of public health guidelines—such as, until recently, allowing indoor gatherings of 10 yet recommending people only leave their homes for essential reasons—is one reason why some people are throwing up their hands and doing whatever they want. If people feel like the government is protecting them and understand what the rules are, most of them will abide by public health guidelines without the threat of fines or jail.

Politicians love it when we blame the pandemic on individual actions, because it takes attention away from their own failures. If we fall for it, we’re going to be reckoning with a massively expanded police and surveillance state long after the pandemic is over, much like after 9-11—but this time, it will be the left’s fault. We can’t police our way out of this mess. We can demand better.