'It felt like the end of the world': From Wuhan to Canada in coronavirus quarantine

Canadian student Myriam Larouche recalls her journey from Wuhan, China, the epicentre of novel coronavirus, to 14 days of quarantine in Trenton, Ont. 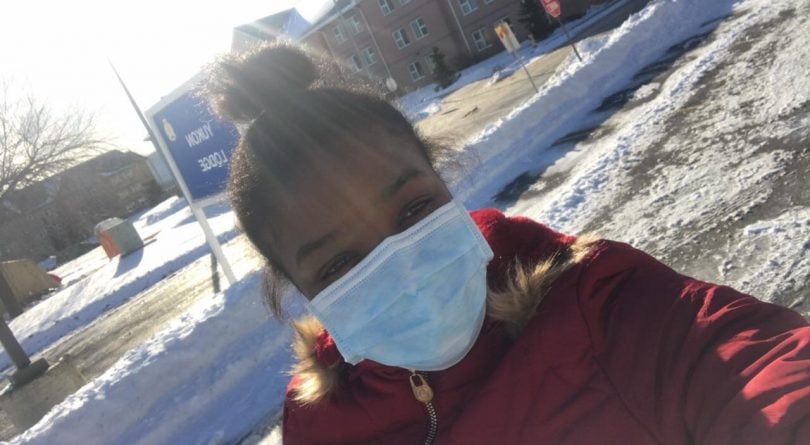 Myriam Larouche is a 25-year-old student attending Central China Normal University. She arrived home on the first Canadian charter plane from Wuhan. She is currently in quarantine at a Canadian Forces base in Trenton, Ont.

It felt like the end of the world. Instead of employees walking in their branded airline uniforms, the airport in Wuhan, China was nearly empty except for me, a few hundred other Wuhan residents who were being evacuated to Canada and the U.S., and officials in yellow or white hazmat suits. Everyone was wearing a mask.

I’d been stressed out during the entire drive to the airport on Feb. 6. I was packed and ready to go, wearing comfortable jeans and a red–and–white sweater for the 14-hour flight to Trenton, Ont., but I still didn’t know if I’d be able to board the Canadian charter plane that was taking Canadian citizens home from Wuhan. I had been told I was shortlisted, and the email I received from Global Affairs Canada said the flight was delayed (though they didn’t say why or how long we would wait). I was instructed to get to the airport no later than 5 p.m. local time—this was not a normal flight.

I first arrived in Wuhan in September 2019 to study as a full-time student at Central China Normal University. I remember being wowed by the impressive, tall buildings, the wide rivers and bridges. Coming from L’Ascension, Que., Wuhan, a city of 11–million people, was a culture shock. As I settled in, I learned that the city was full of life—people were always outside, exercising, riding their bicycles and running. There were so many people everywhere all the time. Now, it was like a ghost town. 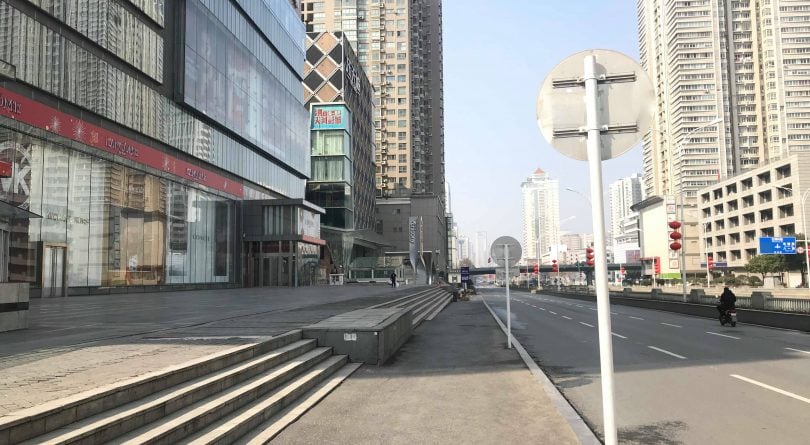 The city was put under lockdown on Jan. 23, which meant that the airport, train station and all public transit had been shut down, and face masks had to be worn in public spaces like malls or restaurants. I stayed in my dorm room and tried to keep busy, teaching myself Mandarin, doing sit ups and stretching, and watching TV series like Empire, L.A’s Finest and Good Girls. Outside, the streets were now empty. You knew that people were there, but you couldn’t see them—they were all at home.

In early December, a friend, who was also an international student studying in China, had sent me a message on WeChat—it was an article on coronavirus. He warned me to be careful because it was spreading around Wuhan. It didn’t seem that serious at the time; it was like hearing about a flu that was going around. By mid-January people were aware of it, but I still saw people walking around outside without masks. I started wearing a mask regularly about a week before the city was officially locked down. I was starting to get scared.

In lockdown, I was stuck waiting for answers: How long is this going to last? Can I go outside? Am I going to be okay? The statistics of people contracting the virus kept growing, and I realized things were pretty serious. I was a bit skeptical of Chinese state media’s reported numbers. In China, since the government has so much power, you’re not sure if the stats they publish are real. 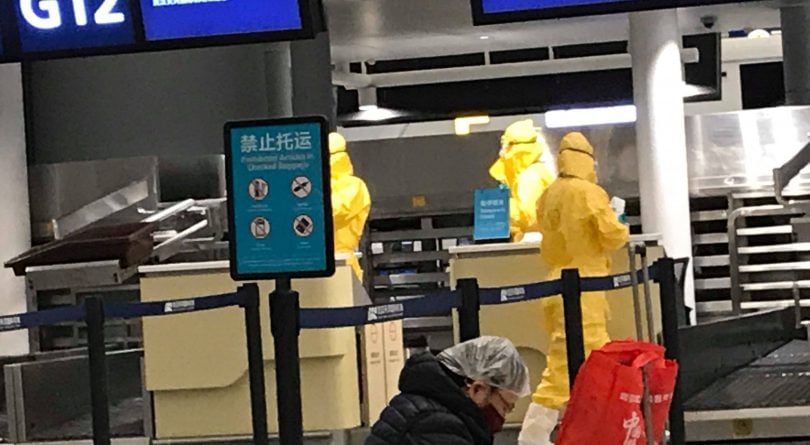 Before I arrived in China, I had registered as a Canadian abroad. When coronavirus began spreading, I received an email from Global Affairs warning me to be careful. At the bottom of that email, they left contact info in case I had any questions or concerns. On Jan. 27, I decided it was time to reach out to them; I wanted to come home.

Feb. 6 was departure day. The driver I had arranged through my university stopped at a roadside checkpoint about three kilometres from the airport. I met another Canadian at the checkpoint and explained that I had no idea whether I had a seat on the plane. He helped me get in touch with Global Affairs. They sent me a list of the people who had spots on the plane, and when I spotted my name, I let out a huge sigh.

If this was any other flight, the earliest I would’ve gone to the airport was three hours beforehand. This time, I arrived not knowing what time we would depart. I messaged my friends in Quebec telling them I was about to board, even though I didn’t know if that was true. All the other passengers were trying to keep busy, chatting in the groups they were travelling with or watching movies on their phones. The food courts were closed but I managed to get a cup of noodles from the only food truck that I saw open inside the airport. 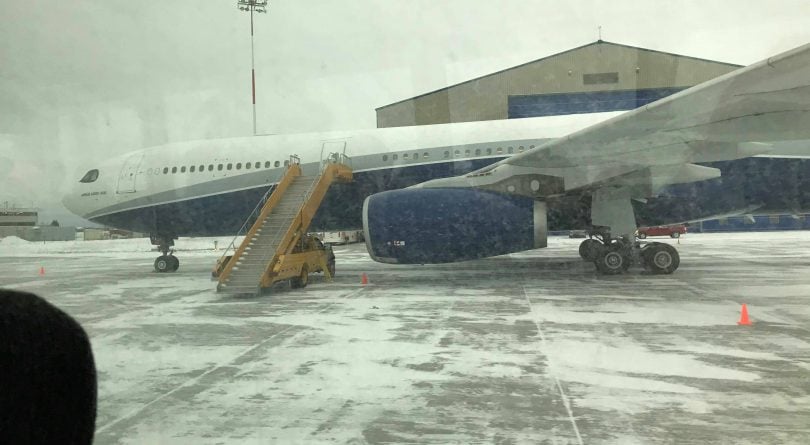 Three hours after I had left my dorm room, I finally registered and got my boarding pass. Some 12 hours went by with no updates. I was exhausted and running out of ways to keep myself occupied so I sat down on one of the airport chairs and decided to take a nap. I woke up to a woman from my flight gently shaking me, telling me that people were lining up. I was like, “Oh my God, thank you!” If I had missed that flight, I’d be stuck in Wuhan.

As we boarded the plane, the staff greeted us with the standard, “Welcome aboard,” but also with some hand sanitizer. They also asked a lot of questions: Did I have any symptoms like feeling tired, having a cough or a fever? Did I have contact with someone who might’ve been infected? Had I eaten meat in the last 24 hours? Health officials in hazmat suits took our temperature with forehead thermometers as we boarded the plane. There were doctors and nurses on board to check on the passengers throughout the flight.

Our flight was 10 hours to Vancouver and then about four hours to Trenton—I slept the entire way. I only woke up when the health officials on board needed to take my temperature or when they offered food. Meals were my happy time, not because the rice and fish were anything special, but because I could take my mask off. Even when you’re used to wearing a mask, it’s different wearing something over your face for 24 hours. It took about an hour for the mask to feel wet and soggy from my breath, so removing it—even for a short time—was a relief. The staff onboard walked around regularly asking us if we needed new masks and I would change mine every few hours, but it still felt uncomfortable. 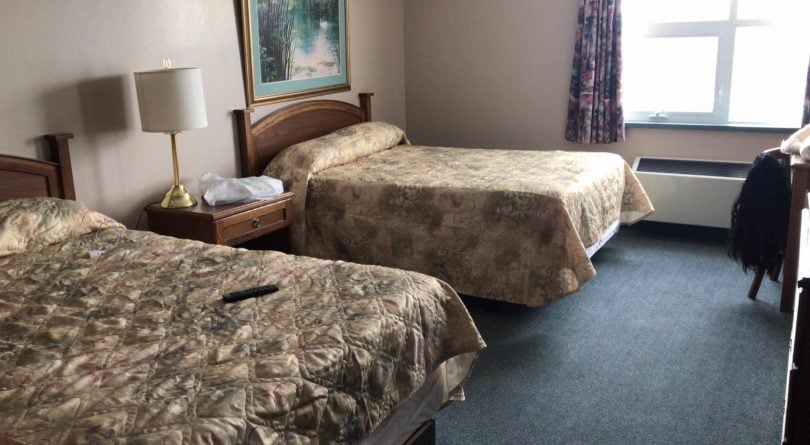 Hotel room where Larouche is to stay in quarantine for 14 days in Trenton, Ont. (Myriam Larouche)

When we finally touched down in Trenton, everyone, including me, clapped and cheered. As I exited the plane and entered the hangar where we changed our masks and sanitized our hands, I felt like I was finally safe. I don’t know how many times I said thank you to the Red Cross, public health and military officials for taking care of us. Everyone was so nice and smiley. Even in these circumstances, it felt like I was being welcomed home.

After our paperwork was processed, we were loaded onto a bus and driven to the Yukon Lodge hotel on the base, my home for the next 14 days. It has 290 rooms. Just like my dorm in Wuhan, my room has two double beds, with beige-patterned comforters separated by a small nightstand. There were items like masks, an electric thermometer, hand sanitizer and toiletries—toothpaste and a toothbrush—waiting for me in the room.

I unpacked the small carry-on luggage I had brought with me (we weren’t allowed to check in any luggage) and took a long, hot shower. I had questions while I was in China—like, When would I be able to see my family again?—and I finally found out the answers. Here at Trenton, it seems everything is under control. I know in a few days, I’ll be able to go home. I don’t have to be afraid of going outside. As I settled into my room, I knew I was going to be fine.

—As told to Ishani Nath