Robert Mueller speaks: I did my job—go do yours

Scott Gilmore: After so much anticipation, the message was simple and blunt: the American people have all the facts they need to seek justice 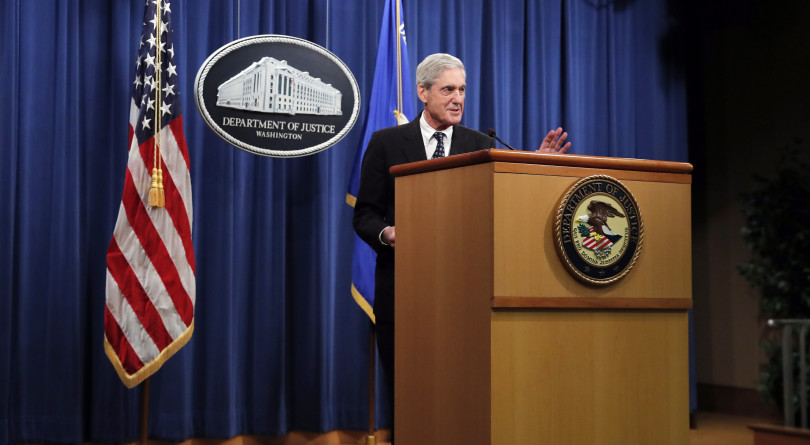 Muller walks from the podium after speaking at the Department of Justice on May 29, 2019, in Washington (AP Photo/Carolyn Kaster)

America waited a long time for the Mueller report. As far back as the summer of 2016, speculation grew that Russia was meddling in the U.S. election, that Donald Trump was colluding with foreign governments, that the fix was in. And people wanted answers.

Well, most people. Donald Trump, his supporters, and most of the Republican Party were aggressively incurious. There was nothing to see here. No collusion. Trump’s own assurances became louder and louder until he was literally shouting.

Ironically, the president’s animated insistence that he had done nothing wrong made some sort of reckoning more likely. When the president finally fired the FBI Director for what he described on TV as “that Russia thing,” and then boasted about doing so to the Russian foreign minister, this reckoning became inevitable. There’s only so many times your be-crumbed toddler can assure you there’s no need to look in the cookie jar, before even the laziest parent raises an eyebrow.

So, then-deputy attorney general Rod Rosenstein appointed the former head of the FBI, Robert Mueller, to investigate links between the Trump campaign and Russia.

Mueller is (or was) a character plucked right from the depths of a Democrat’s fever dream. If anyone was going to save them from the unexpected cataclysm of a Trump presidency, it was this man: a decorated Vietnam vet, famed for his rectitude, the G-Man’s G-Man. A sigh of relief rose from the left—the Republic would be safe. Justice was on the case.

And, as Justice got to work, America waited—waited and watched, closely. But nothing leaked from Mueller’s office. In contrast to Kenneth Starr, a previous special counsel who happily held press conferences from his own driveway, as Mueller investigated he said nothing and his team said less.

The crowded cable panels speculated nonetheless, and as indictments began to emerge, the speculation accelerated.  The president’s campaign manager, his deputy campaign manager, his personal lawyer, his national security advisor, were all arrested. Mueller was on the march. Justice was now inevitable.

Then the big day arrived. Mueller was done. America was saved. Trump was finished. And, to be fair to the breathless speculators, the president himself was acting like he expected to soon be joining his colleagues in prison. His usual erratic behaviour became even louder, angrier; his endless declarations of innocence became almost comically desperate.

So, when the president’s new Attorney General William Barr issued a two-page summary of the Mueller report, and cleared the president of any wrongdoing, the media, the Democrats, the 54 per cent of Americans who disapprove of Trump, all gasped. In the words of the recently disgraced Game of Thrones writers, expectations were… subverted.

Even when the report was released, and it was revealed Barr had shamelessly misrepresented its findings—Mueller had found overwhelming evidence of Russian interference, of cooperation with the Trump campaign, and of obstruction of justice—it was too late. The momentum was gone. The mob of townspeople chanting for justice had already dispersed. Trump had gotten away with it. Democratic leaders explained impeachment was too politically unpalatable. Pundits stopped speculating about Trump’s arrest and began speculating about his second term.

He read a short prepared statement. It was simple and blunt. After two years, he was done. His investigation was over. It found that the Russians had made “multiple, systematic efforts to subvert” American democracy. That attack was meant to hurt Trump’s rival. And that if his team “had confidence the president did not commit a crime, we would have said so.” Furthermore, charging the president was not an option for them because the U.S. constitution required a different path—an impeachment trial.

Mueller’s message was clear: I was never going to bring you justice—I was only going to give you the facts. You should never have waited for me to determine if the president is guilty. That is up to you and the people you have elected to represent you. Justice can be done—but only by the American people. I did my job—go do yours.

Then Mueller walked away from the podium and retired.