Russia's digital warfare has put Western democracies in the crosshairs

Opinion: Russia is sowing discord, amid allegations of ties to assassinations and investments into social-media companies. The time for complacency is over 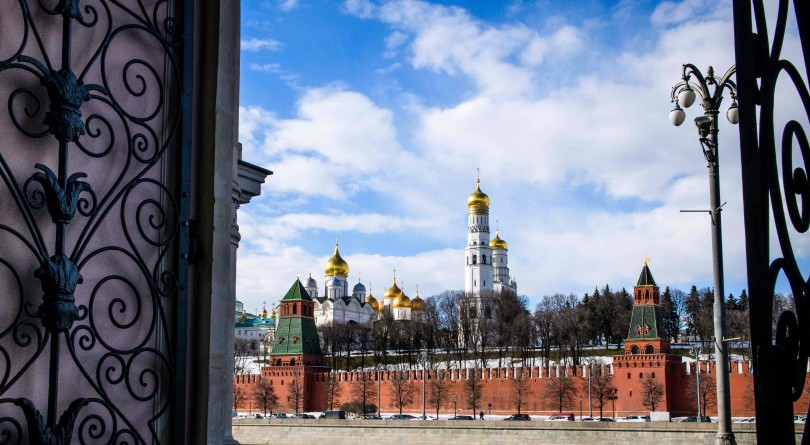 A view of the Kremlin towers and cathedrals in Moscow on March 29, 2018. At least 25 countries have ordered out more than 120 Russia diplomats in response to the March 4 attack on former Russian double agent Sergei Skripal and his daughter in the English city of Salisbury. / AFP PHOTO / Mladen ANTONOV (Photo credit should read MLADEN ANTONOV/AFP/Getty Images)

Lisa Shymko is a Canadian political scientist, journalist, and international affairs analyst who serves on the boards of several Canadian non-governmental organizations. She has advised successive Canadian governments on foreign policy vis-à-vis Russia and the former Soviet Union, and was part of Prime Minister Stephen Harper’s delegation on three official visits to Ukraine.

In 1932, an intrepid young female journalist by the name of Rhea Clyman was expelled from the Soviet Union for chronicling the horrors of Stalin’s regime: the secret police, the gulag, and the state-sponsored famine by which millions perished in Ukraine. The brave Jewish-Canadian correspondent— the first Western journalist to report on the forced famine — was accused by Moscow of spreading fake news and promptly banished from the USSR. Like Clyman, a Welsh journalist by the name of Gareth Jones traveled to the Soviet Union and subsequently published his accounts of the forced famine ravaging Soviet Ukraine. He too was banned from ever entering the Soviet Union again. Not long afterwards, Jones was shot dead in the Far East under mysterious circumstances believed to be linked to the Russian secret police.

Eager to endear themselves to the Kremlin, Stalin apologists at the time, like the New York Times’ Pulitzer prize-winning reporter, Walter Duranty, railed against journalists like Jones and Clyman and any allusion to genocidal famine, instead offering a sanitized version of the facts, with the tacit backing of White House officials eager to improve relations with the new regime in Moscow.

If the story sounds familiar, it should. Attempts to silence brave truth tellers like Clyman and Jones have been the modus operandi of authoritarian states for decades. And ideology is of little relevance: Replace Duranty and the New York Times with Sean Hannity and Fox News, and the results are identical. What passed in the 1930s as the “intellectual left” cozying up to the new USSR has now morphed into the “populist right” defending Trump’s adulation for Vladimir Putin.

And while the former USSR relied exclusively on left-wing messaging to smear its critics, today’s Russia is waging an information war in Europe and North America, by pushing a hybrid left-right mix of anti-Americanism, anti-Semitism, and anti-immigrant racism. In fact, Moscow’s online propaganda operatives often amplify racist content, moving seamlessly between the U.K.’s Labour left and France’s populist far-right.

In 2016, American experts studying our media ecosystem discovered an odd phenomenon: seemingly left-wing supporters of Wikileaks were connecting with supposedly right-wing supporters of Donald Trump. The common source behind the huge volume of tweets in these digital echo chambers was an automated, Russian-controlled system of “bots” created to give the false impression of mass, public support. It all helps Putin’s desire to create constant chaos, as anti-corruption activist Bill Browder said—himself a victim of Kremlin intimidation—since disrupting democracy is an authoritarian’s foremost priority.

Sadly, our feeble institutional reaction to Moscow’s willingness to use digital warfare to destabilize our democracy has only emboldened Putin’s long game. For years, the political left’s intellectual elite—once the defenders of human rights and the promotion of peace—largely stayed silent when the Kremlin launched its spree of dissident assassinations, invasions of neighbours, bloody wars, and cyber manipulations. Likewise, too many on America’s righteous right—once the outspoken critics of Kremlin crimes—have donned capitalist blinders, choosing profit and political expediency over principle.

Consequently, Russia’s foray into the American political landscape has reaped great rewards for Vladimir Putin—most notably, his apparent hijacking of the Republican Party and its political allies. The party of Reagan, which espoused the spread of freedom and called out an “evil empire,” is now being held hostage by a leader who defies his intelligence community and remains mysteriously enamoured with a KGB strongman. The party of John McCain now operates in an alternate reality where primaries for congressional races can be won by a neo-Nazi Holocaust denier, as evidenced by a primary in Illinois.

Questionable ties between the GOP’s longtime partner—the NRA—and a Putin-allied Russian banker named Alexander Torshin now expose allegations of “dark money” flowing illegally to Trump’s campaign through an NRA filter. Veteran Republican operatives like Roger Stone and Rick Gates are now suspected of cooperating with foreign hackers, leakers, and Russian intelligence officers. And leading party fundraisers, donors, and strategists, like Elliott Broidy, Robert Mercer, and Steve Bannon are at the centre of investigations into sanctions evasion and social-media data breaches with tentacles reaching into Russia. Even religious evangelicals, who once saw themselves as the moral compass of the Republican Party, are concocting new excuses for a President linked to Putin, porn stars, spies, and money launderers.

The willingness of the Republican Party’s traditional media ally, Fox News, to echo the narrative put out by the Kremlin is a troubling sign that Moscow’s weaponization of “fake news” is working. The crisis was recently highlighted when retired Lt. Col. Ralph Peters, a strategic analyst for Fox News, quit the network, essentially accusing it of doing the work of Putin by engaging in propaganda, fact-twisting, and dishonest assaults on the defenders of U.S. democracy: the FBI, the Justice Department, the courts, and the intelligence community.

For years, the Putin regime, now largely run by a KGB boys’ club, anticipated the strategic importance of controlling a digital delivery system for its lies and obfuscation. Long before anyone was paying attention, Kremlin-owned enterprises made massive investments in the world’s largest social media platforms through Russian billionaire, Yuri Milner. Using a maze of off-shore shell companies, Milner funnelled hundreds of millions of dollars from Putin’s U.S.-sanctioned VTB Bank into investments in America’s key digital platforms. The Russian oligarch is believed to own more than 8 per cent of Mark Zuckerberg’s Facebook and more than 5 per cent of Twitter. Adding to these multiple layers of Kremlin penetration is the fact that Milner, the founder of Russia’s giant Mail.ru email service, is conveniently invested in Trump-family ventures run by Jared Kushner.

Russia has been accused of being complicit in the shooting of Malaysia flight MH17, of targeted assassinations of dissidents at home and abroad, of military aggression in Ukraine and Syria, and of election meddling around the world. If Russia is to be held accountable, we must block Putin’s ability to finance and operate the fake-news enterprises that erase Moscow’s complicity in domestic and international crimes.

Truth tellers and critics of the Putin administration—like murdered journalist Anna Politkovskaya, defector Alexander Litvinenko, whistleblowers Sergei Magnitsky and Alexander Perepilichny, as well as political activist Boris Nemtsov—have already been silenced. In addition, Western intelligence services believe at least 14 suspicious deaths in the U.K. can be traced directly to Russia. These assassination efforts—including the recent case of attempted poisonings of ex-pats Sergei Skripal and his daughter Yulia in Britain, which British officials believe the Kremlin was aware of—appear to serve as brazen warnings to Russian exiles not to side with the West.

But now, in a digitally driven world, online platforms have become the new battleground where bad state actors wage war on liberal democracies, using stolen databases and automated lie factories. And since foreign, state-owned institutions are not barred from investing in American companies, our adversaries are taking full advantage.

Whether we like it or not, social media platforms and digitized news services now comprise part of our national security assets. The time for complacency is over: Lawmakers must face the challenges head on, by passing the legislation needed to prevent foreign adversaries like Russia, China, Iran, and North Korea from securing the digital tools that allow them to suppress the flow of truth in our democracy.

Notwithstanding the recent wave of symbolic, diplomatic expulsions, it’s high time the U.S. and its allies freeze the banking and real-estate assets of Putin’s nefarious network of accomplices—the oligarchs who live, play, and invest their dirty money in London, Vienna, Miami, New York, and Beverly Hills, all the while working to destroy the very countries in which they’ve found safe haven.

As citizens of open societies, we are the modern-day successors of truth tellers like Rhea Clyman and Gareth Jones who, more than eight decades ago, bravely stood up to Russia’s totalitarian lie machine. We must protect their legacy by ensuring that Vladimir Putin and his cohort of corrupt collaborators—resuscitators of a failed authoritarian state—never succeed in silencing truth again.