Andray Domise: The federal leaders debate had other options—to include the voices of the underrepresented and to ostracize the movements that spread hate. What we got isn't good enough. 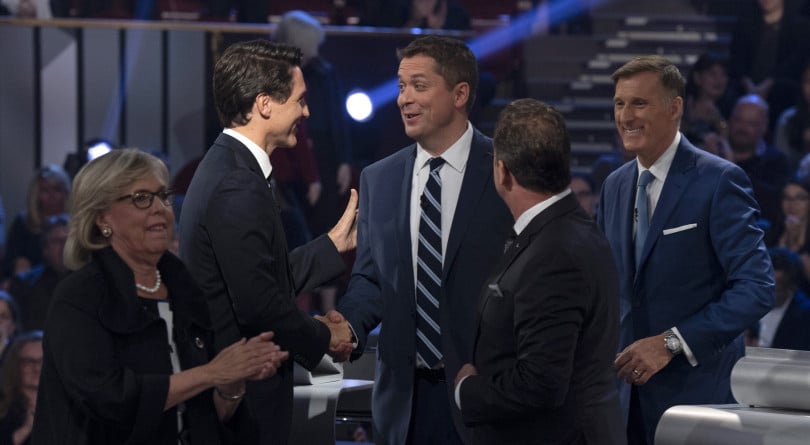 If such a thing as a gold standard can be said to exist for the Canadian federal leaders debate, it’s a moment that happened over 35 years ago, in an over-the-podium exchange between Progressive Conservative opposition leader Brian Mulroney, and doomed Liberal Prime Minister John Turner. Having come under fire for approving a block of political appointments (e.g. crown corporation executives, senators, and judges), Turner claimed the appointments were made in agreement with his predecessor Pierre Elliott Trudeau in exchange for Trudeau’s retirement as party leader. During the debate, Mulroney castigated the appointments as “the old-boy network, back in town.” After a testy exchange, Turner retorted, “I had no option,” to which Mulroney reared up to his full height, pointed across the stage to Turner, and let fly a tirade beginning with the famous words: “You had an option, sir.”

In that response, Mulroney captured the anger and disaffection many Canadians felt towards the Liberal government, channeled into a scolding that viewers watching from home could only wish to deliver to the Prime Minister with their own tongues. It was, as they say, the “knockout punch,” and the type of moment that Canadian politicians have practiced in the mirror to deliver (and pundits have awaited as they sat through the slog of policy jargon) in every leaders debate since.

I bring this up because last night’s debate was full of moments quite obviously rehearsed to deliver a fatal blow. There was Conservative leader Andrew Scheer calling Prime Minister Justin Trudeau a mask-wearing “phoney” and a “fraud” who “[does] not deserve to govern this country,” as well as Trudeau’s broadside against Green Party leader Elizabeth May, responding to her criticisms on environmental policy that “a slogan is not a plan.” Perhaps the most memorable line of the night came from NDP leader Jagmeet Singh appealing directly to Canadians that “you don’t have to choose between Mr. Delay and Mr. Deny,” referring to the climate change policies of both Trudeau and Scheer.

MORE: Well, that was helpful

These sound bites were produced with almost every exchange between the candidates, as well as plenty of cross-talk to the endless frustration of the moderators (indeed, CBC’s Rosemary Barton was the one to embody the viewers’ emotions in this debate). But if there was a moment that truly captured the frustration with the utter absurdity of this campaign—the raft of scandals trailing behind the Liberals, the recurring failure of Canadians to cope with the reality that one of our party leaders is of Sikh background and is himself also a Canadian, and the rise of anti-immigrant sentiment over the past two years—it actually came after the debate. And it was delivered by Bloc Québécois leader Yves-Francois Blanchet.

Blanchet, who in the previous TVA debate made a comment to appeal to Quebec voters, (which came across as a nationalist dog-whistle), was questioned by a reporter from Rebel Media, (which had earlier that day won a Federal Court battle to be granted accreditation), about the rise of “Western separatism.” “I won’t answer Rebel News,” said Mr. Blanchet, attempting to cut off the reporter before the question was asked. It was asked anyway, and Blanchet held firm, responding, “my answer is that I won’t answer you.” He then proceeded to ask if there were any more questions, effectively boxing out the reporter. After years of far-right sentiment being normalized in Canadian media, Blanchet set a rigid example for the appropriate attitude towards “media” organizations with white nationalist ties. And it was an example that came far too late in an election campaign which has spiraled into a disaster for Canada’s image as a country that values diversity, and all of its people equally.

In that brief moment, Blanchet—the unlikeliest of messengers, given his defence of Quebec’s Bill 21—demonstrated the values which Canadians often say they believe in, but often fail to live up to. Earlier during the debate, party leaders were asked questions about how they would work with provinces and territories vis-à-vis the United Nations Declaration on the Rights of Indigenous people, and the conversation pivoted towards oil pipelines and green energy policy. NDP leader Jagmeet Singh was asked about his stance towards Bill 21, and then an absurd scene followed, in which every party leader was given an opportunity to spar with Singh on the intersection of politics and racialization.

MORE: Spot the debate among the one-liners

Even the Canadian Debate Production Partnership itself looks to have conducted itself in embarrassing fashion according to Cheryl McKenzie of APTN News. In an interview with Canadaland, McKenzie said the partnership rather farcically offered to have an Indigenous reporter hold a microphone for a “regular Canadian” to ask a question to the candidates remotely, rather than including an Indigenous journalist in the moderator lineup.

If there’s anything to have taken away from the debate, it’s that despite their promises, Canadian politics (and in many ways, Canadian political journalism), has not yet developed the acumen necessary to represent the interests of all Canadians, nor of Indigenous peoples. For decades, they have had other options—to include the voices of the underrepresented, and to ostracize the people and movements that spread hate and intolerance. Instead, with a candidate on the debate stage and reporters in the press gallery who embody those xenophobic antagonisms, the political class has chosen to say yes to old attitudes, and to old stories.

That, if I may say respectfully, is not good enough. We have options, and we can do better.