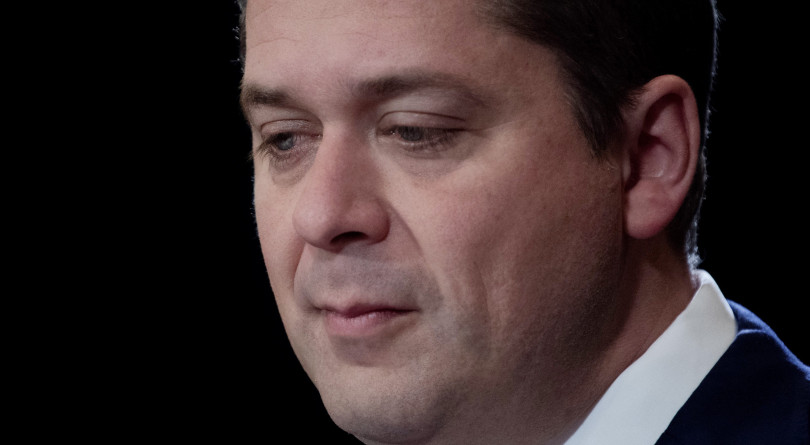 Scheer speaks during a news conference in Regina on Oct. 22, 2019 (THE CANADIAN PRESS/Adrian Wyld)

It’s a poor workman who blames his tools but Andrew Scheer doesn’t exactly have much in the way of money these days, does he? And so it was happy trails to Chief of Staff Marc-André Leclerc and Director of Communications Brock Harrison this week as Scheer 2.0 boots up to take on Justin Trudeau in the coming session of Parliament.

Now, having been one myself, I would like to think directors of communications are the engine room of any properly functioning political outfit but, in reality, I know we’re just the idiots who brief the press. It’s a high-risk environment and a tough gig. There’s a reason Stephen Harper went through eight of us in his time in government; we’re like the dudes who wear the red jerseys in Star Trek, only more disposable. And while it’s true some comms directors wield big influence, nobody in their right minds actually thinks we’re the ones calling the shots (including the press).

More to the point, nobody thinks Andrew Scheer lost the last election because Leclerc wasn’t chief-of-staffing hard enough or that Harrison wasn’t sharing dark and snarky memes from the Tory war room with enough conviction.

The Conservatives lost the last election because their platform was thin gruel served up by a man who wouldn’t stand out in a crowd if he showed up to a Pride parade dressed as a Catholic priest.

Of course, a big part of Scheer’s problem is that the one role Canadians do buy him in is that of the Catholic priest. To watch Scheer become visibly distressed every time someone asks him about gay people is to understand how those Japanese soldiers must have felt when they finally came out of the jungles of Guam 28 years after the end of World War II to find out the world had changed without them. Scheer needs to take a look around modern Canada and figure out that it now looks more like suburban Toronto than it does rural Alberta.

So forget the staffing changes in the Office of the Leader of the Opposition. The ultimate test for Scheer will be whether he can convince his party that he has a plan to recapture the ramparts Harper claimed in his majority 2011 win. If he can, he stays. If he doesn’t, he will be deep-sixed. Simple.

Nor does Scheer have a second to waste. Because the evangelicals aren’t happy. The Quebec wing of the party wants him out.  And Progressive Peter MacKay has popped up to rue the missed open goal of the last election. Any Conservative leader that has lost the evangelical, French, and progressive conservative wings of the party doesn’t have much of a coalition left.

The penny appears to have dropped. That Scheer is popping by places like downtown Montreal to chat what went wrong is a good sign. That he’s getting bad briefings about his chat showing up in the Toronto Star isn’t. Worryingly for the boss, there doesn’t appear to be much good will anywhere in the party.

The brutal truth facing Scheer is that very few people voted Conservative in the last election because of Andrew James Scheer. According to data from a rival party only 1 per cent of voters marked an ‘X’ next to a Conservative name on election day because they liked the cut of Scheer’s jib. Take that figure with a grain of salt, but it doesn’t change the fact that Scheer isn’t registering. Harper might have been Marmite but at least he provoked a response.

Can Scheer even change? It’s a tricky proposition at the best of times, let alone while trying to hold a government to account in a minority Parliament. And while it’s true Justin Trudeau morphed from go-nowhere drama teacher to enviro-feminist Prime Minister, he did so on his own time, largely away from the spotlight. Scheer doesn’t have that luxury.

What we do know is that making cosmetic changes like swapping some of the help won’t be enough. Homeboy needs a serious makeover; the kind people make TV shows about. It’s time to swing for the fences and sock that dinger Scheer talked about in the last campaign.