Opinion: The Ontario Progressive Conservatives have created a fiscal and environmental hole for themselves they have no clear way to fill 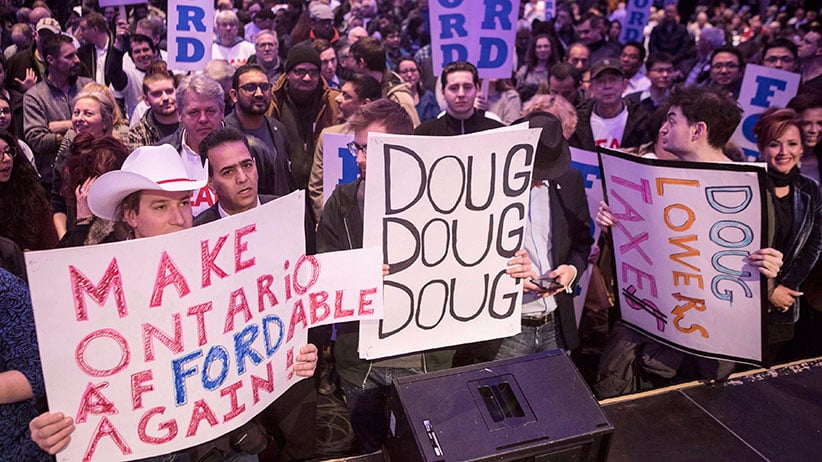 Mike Moffatt is the director of research and policy at Canada 2020, an assistant professor at Western University’s Ivey Business School, and co-owner of Nexreg Compliance, an exporter of services to the chemical industry

In the leadership race triggered by the resignation of Ontario Progressive Conservative leader Patrick Brown, all three candidates have pledged to scrap the carbon tax that was the centrepiece of the Tory platform. Can the platform be salvaged after removing one of the key planks? And if so, how?

Fortunately for policy wonks the platform, known as the People’s Guarantee, is a well-designed and fully-costed document, making analysis relative straight-forward. In year one of the platform, Ontario’s existing cap-and-trade program would remain in place, and the government would run a projected $2.8-billion deficit, though we should keep in mind these numbers are estimates. Small changes to interest rates, inflation or economic growth will change the final amounts by hundreds of millions of dollars.

Years two through four of the mandate are where things get interesting. Here are the relevant three-year (total) item estimates for discussion, taken from Page 76 of the People’s Guarantee:

The obvious solution to make up for the lost revenue is to simply run a deficit. If we apply the proposed $1.3 billion surplus against the $9.8 billion revenue hole, we have a three-year deficit of $8.5 billion, for an average of $2.8 billion per year. This almost exactly matches the deficit the Tories have planned for year one, so such a deficit would not be without precedent. Economically, a yearly deficit of $2- to $3 billion in a province the size of Ontario is no problem whatsoever. Politically, though, it may be difficult given the party’s rhetoric on balanced budgets.

The three leadership candidates are indicating that the lost carbon-tax revenue will be made up for in spending cuts, but it is hard to see how this will be achieved. Over the three years, the existing platform proposes cutting nearly $12 billion from the Ontario budget in years two through four, with more than half of the dollars coming from the “value-for-money” spending cuts. Finding another nearly $10 billion to be cut is daunting; even if the Tories canceled all of their proposed new spending initiatives they would only be 60 percent of the way there.

While the fiscal hole has an obvious (if not necessarily politically viable) solution, the environmental hole caused by the elimination of the carbon tax will be much harder to fill. There are three basic ways that government policy can reduce greenhouse gas emissions:

All three leadership candidates have signed a Canadian Taxpayers Federation pledge to repeal cap-and-trade and to not enact a carbon tax, so option one is a non-starter. The Tory platform eliminates the subsidy programs associated with Ontario’s existing cap-and-trade program; given the financial constraints of the People’s Guarantee (not to mention political constraints) it is difficult to see that spending being reinstated, so option two would appear to be off the table. The Tories have, quite justifiably, spoken at length about the very real competitive pressures faced by Ontario exporters. Given these pressures, it is hard to imagine the Tories implementing expensive new emissions rules and regulations on Ontario companies. But after rules and regulations there are no alternatives, so without those there is simply no way that the Ontario government can use policy to reduce greenhouse gas emissions.

The fiscal problem created by the removal of the carbon tax from the people’s guarantee can be addressed, though the fixes may not be political palatable. The environmental policy gap, however, would appear to be without a solution. Unfortunately, the leadership candidates have very little time to find one.