Should our lives be centred around our neighbourhoods post-coronavirus?

Jennifer Keesmaat: For too long, we’ve accepted the burden of long commutes as a part of modern living. It's time to rethink our cities and invest in neighbourhoods, where residents can get around on bike and foot. 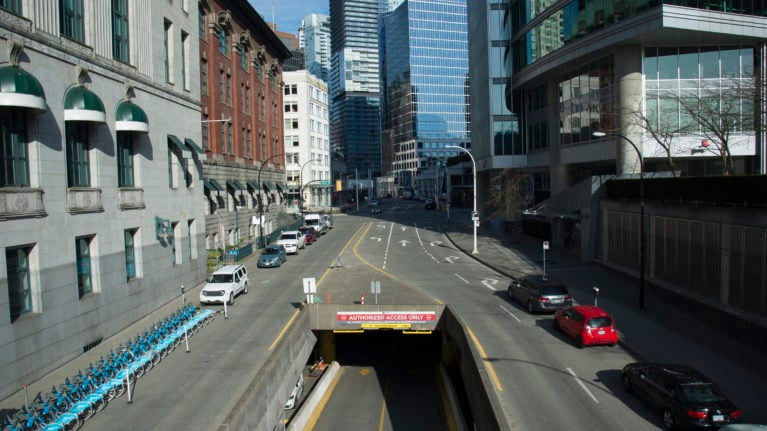 Near empty streets are pictured in downtown Vancouver on Apr. 6, 2020. (Jonathan Hayward/CP)

Jennifer Keesmaat is the former chief planner of the City of Toronto and the CEO of The Keesmaat Group.

The world over, our homes and our neighbourhoods have quickly become the focus of our everyday lives. We watched in shock as cities and countries mandated lockdowns, first Wuhan and then Italy, rendering the Spanish Steps empty for possibly the first time in history. Little did we know then that weeks later Canadians would just as quickly acquiesce our own freedoms in an attempt to slow the spread of the coronavirus.

Doing so has precipitated previously unfathomable changes to our everyday lives. No more early rising to stave off the long commute on transit or in the car. Gas is suddenly cheap, and in some jurisdictions across North America—from Houston to Halifax—bus fares have been suspended temporarily in recognition of the role that transit plays as an essential service for many frontline workers.

With this change long commutes have vanished for most of us as our geographical footprints have become smaller and clustered around our homes. Nature has returned to cities: in Toronto, residents are admonished not to feed the foxes, while in Barcelona, wild boars visit city streets during daylight. Most of us have newfound time on our hands as everyday travel demands—including getting the kids to school—have evaporated.

MORE: COVID-19 has created a debt crisis for Canadian households

We know our world won’t stay this way, nor should it: we don’t want to live in a world where children are unable to go to school and where joblessness is the norm. But there is a silver lining: disease has, in previous eras, prompted changes in the design of cities, and it could change our cities for the better again. Maybe this time it is what we have learned while living in quarantine that will pave the way for a brighter future.

For too long, we’ve accepted the burden of long commutes as a part of modern living. Life is better without it, but we’ve designed our cities in such a way as to make it a requirement, for many. The 15-minute neighbourhood—recently popularized by Paris’s Mayor Anne Hidalgo as part of her 2020 mayoral re-election campaign—is based on this simple premise: we can “thicken” existing neighbourhoods by bringing shopping, leisure and services like dentists, doctors and salons to where people already live. In doing so, we can begin reducing our dependence on oil by moving towards decarbonized cities where walking and cycling are real transportation choices. We can begin the rebirth of public life in our cities as places for people, for nature and for our health.

Part of this experience provides a glimpse into what a future would be like if we designed our cities based on the idea that most of what we need to get on with daily life is in close proximity to home.

MORE: Can Canadians eat their way through this French fry surplus?

Imagine a Saturday morning picking up some milk at the local store, dropping off the kids at the local community centre for swimming lessons, pausing for a coffee at your local park, then taking the kids over to your neighbour for a playdate, without having to lug everything and everyone into the car, sit in traffic, or worry about a parking spot—this is the promise of the 15-minute neighbourhood. All these things can be done seamlessly on foot.

This way of living offers positives at both an individual and a societal level. At the macro level, it produces cities that are sustainable and resilient, with less space dedicated to roadways, less air pollution and less noise, and more room for pedestrians as well as children to run and play. Social cohesion grows too, as neighbours, whose lives are criss-crossing at the local playground and cafe, build informal supports for one another.

At the personal level, pedestrian life procures a more enjoyable and healthier environment. As walking and cycling become the foundations of mobility, transit or driving is only used for some, instead of most trips. Longitudinal health data is unequivocal: people who live in denser, walkable urban environments are healthier than people who live in sprawling, auto-dependent suburbs. Car-dependent communities shorten life spans exhibiting higher rates of respiratory and cardiovascular diseases, some cancers, diabetes, and Alzheimer’s disease.

But we can change this, particularly in our suburbs: “tall-and-sprawl” housing is linked by arterials that feel like highways, and it’s here where we can transform our streets for cycling because there is so much space; we can add new forms of housing such as laneway homes, walk-up apartments and mid-rise homes along corridors because there is land. The promise of the 15-minute neighbourhood relies on streets designed for walking and cycling, but it also needs to be dense enough to support local retail and services.

In most cities across Canada today, achieving this is still a dream: city land is zoned exclusively for single-family homes, an outdated approach that makes 15-minute neighbourhoods nearly impossible. Changing this doesn’t require massive public or private investment; the initial barrier is policy and regulation. But the policies that can make this vision possible can be enacted overnight in City Council chambers across the country; the 15-minute neighbourhood simply begins with a choice about using land differently than we have in the past.

Over the last number of decades, our public realm has been handed over to cars. We have built extensive road and transit infrastructure to get us from our homes to the grocery stores, ice rinks, parks and medical clinics. Instead of sitting in traffic on the way home from Loblaws or Shoppers, many of us are now sitting on our porches or balconies, or poking our heads out the window to take in the nightly 7:30 p.m. salute to frontline workers. Should this be the new normal?

We are living a vast experiment on neighbourhood living, and it provides a clue for how we can deliver our children a more resilient and sustainable future.