Solving the conundrum at the heart of Canadian conservatism

Andrew MacDougall: Andrew Scheer's fate lies in the hands of the Conservative membership, and it's not exactly representative of Canada today 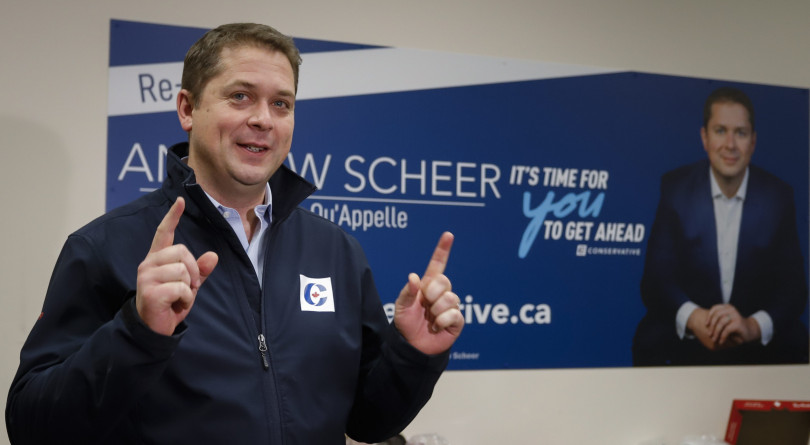 Scheer speaks to volunteers at his campaign office in Regina on Oct. 21, 2019 (Jeff McIntosh/CP)

The knives are now well and truly out for Andrew Scheer, even if we can’t (yet) see any signs of a wizard behind the curtains waiting to benefit.

With the creation of Conservative Victory, a pressure group launched by lobbyist Kory Teneycke (full disclosure: my former boss) and Canada Proud’s Jeff Ballingall (also a former colleague), the internal strife in the Conservative movement is now spilling across the nation’s front pages and it’s not pretty.

“The party needs to begin its rebuilding process and that’s not going to begin under Andrew Scheer,” Ballingall said during a round of media. “His election performance was very disappointing but his post-election performance has been abysmal,” he added. Compounding Scheer’s misery, former Conservative national campaign director Jenni Byrne also passed her negative verdict via the media, saying that Scheer staying on wouldn’t be in “[Scheer’s] best interests or the best interests of the party.”

Those are some pretty big strikes to take for a Conservative leader, although admittedly ones thrown by people who weren’t involved in Scheer’s loss to Justin Trudeau. Sour grapes can duly be factored in, etc. And while it’s germane to note that Teneycke was Doug Ford’s campaign manager in last year’s provincial election, and that Byrne held the same title for Harper’s 2011 majority campaign, and thus might have ulterior motives for speaking up, it doesn’t make the threat to Scheer’s leadership any less true.

Nor, however, do these interventions make an insurgency against Scheer more likely to succeed. Because Scheer’s fate ultimately lies in the hands of the Conservative membership and they’re not exactly representative of the Canadian population as a whole. And in a febrile atmosphere, where conservatives’ distrust of the media naturally runs high, any press attacks or attacks on Scheer’s leadership carried via the press are likely to be discounted, and might even provoke an immune response inoculating Scheer from further criticism.

In other words, the party has a bit of a ‘Jeremy Corbyn’ problem, in that the party membership, which isn’t representative of the country, is down for what their leader is selling, even if the rest of the country finds it unappealing, or at least not appealing enough to win an election. Which means the Conservative Party of Canada can probably forget about power until it can solve the conundrum at the heart of the modern party: how to carry the base along while growing it into more centrist territory.

The simple truth is that no existing or prospective Conservative leader can ignore the fact that the movement includes an overwhelming segment of the minority view on issues like abortion, gay marriage and immigration. Nor, however, can the leader ignore the fact these views are a big part of the barrier to growth. More to the point, the country isn’t likely to get more conservative on culture or social issues. To put it in terms that might not be well received by the base: if the mountain won’t come to Muhammad, then Muhammad must go the mountain.

Past tactics on party unity won’t work again. Stephen Harper convinced social conservatives to hide their light under a bushel because it wasn’t electorally advantageous to let it out. Harper was pragmatic, not dogmatic, in his approach, and that pragmatism must continue as the party moves into the 2020s. Now that public attitudes on issues like gay marriage have progressed even further it’s incumbent on the Conservative leader to lead the conversation within the movement and park the issue once and for all.

And the same goes for abortion; the majority of Canadians simply will not restrict the right to an abortion. This fact might offend some sensibilities but it’s a reality. Another reality is that no reputable doctor will do a late-term abortion absent a threat to the mother’s life and that abortion rates aren’t trending upward. In other words, there is no public policy problem to solve. If opposition to abortion is what motivates you then public life isn’t the pitch on which to pursue it.

If Scheer were focused on the existential problem of growing the party he would probably be on sounder footing than he is now. But he’s not, or at least gives no appearance of being on it. For all the talk of Scheer being a consensus builder during his leadership run, he appears to have lost the ability to build any unity post his loss to Trudeau.

On the question of consensus, what’s past is present. One of Scheer’s failures post-leadership victory was keeping Maxime Bernier involved and engaged. The result was the creation of the People’s Party of Canada and Bernier’s subsequent vandalism during the campaign. That Scheer hasn’t learned his lesson, and seems to have no plan for learning one, is one of the things driving discontent. Scheer has to make it about what he does now, not what he didn’t do then.

At present, however, Scheer is taking fire from evangelicals, Red Tories and Quebec nationalists. In other words, from pretty much everyone. If Scheer gets a cool reception from the rabid conservatives of the United Conservative Party at their convention it will be curtains. He needs to get on the front foot.

Scheer will likely be well-received in UCP-land, but he can’t use that as an excuse for complacency. The UCP crowd are the converted; Scheer needs to preach elsewhere, while not losing the faithful. It will take a more forceful approach than anything Scheer has offered to date.