'Solo: A Star Wars Story' flopped in China, inviting us to imagine a nostalgia-free vacuum in which 'Star Wars' can be seen for what it really is 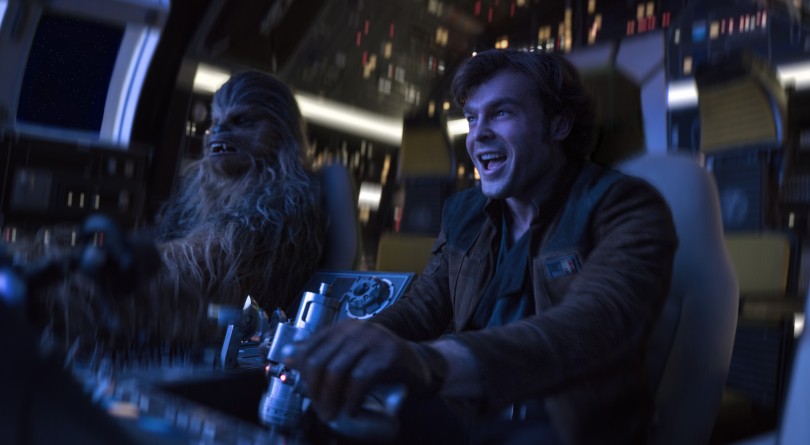 Han Solo’s most famous line comes early in the 1980 Star Wars sequel The Empire Strikes Back. Fleeing the Empire’s assault on a snowy Rebel base, hotshot pilot Han, Princess Leia, and fusspot robot butler C-3PO take to the stars in the rustbucket Millennium Falcon. Unable to blast into light-speed to flee their pursuers, Solo decides to lose the imperials in an asteroid field. Ever the pessimist statistics wonk, C-3PO mentions that such a manoeuvre is inadvisable, with the probability of survival coming out to 3,720-to-one. With typical roguish wit, Solo snaps back: “Never tell me the odds.” (Spoiler alert: they survive.)

But while roguish, against-all-odds charisma may win out in the world of sci-fi space opera, the real world remains the province of number-crunching nags of the C-3PO variety. To wit: the latest Star Wars prequel, Solo, bombed at the Chinese box office, with a paltry $10-million USD opening weekend take, following disappointing returns in China on The Last Jedi, Rogue One and The Force Awakens. Where the Star Wars movies remain both global box-office behemoths and legitimate cultural touchstones, the odds seem fatally stacked against them when it comes to China’s much-coveted audiences.

It’s a curious and high-stakes downward trend. China is the world’s second-largest filmgoing market—poised to eclipse America by 2020—and it does have a seemingly voracious appetite for big-budget Hollywood franchise blockbusters, from the Marvel movies (Avengers: Infinity War raked in almost $200 million in its own recent opening weekend) to Transformers, Fast and the Furious and even the Resident Evil action-horror films. While Hollywood studios increasingly rely on Chinese audiences to bolster box office and justify the swelling budgets of their biggest tentpole movies, Walt Disney Co.—Lucasfilm’s parent company—especially needs to expand its footprint in China to retain its dominance over theatrical box offices, an already narrowing market in the Netflix era. So Star Wars needs China—but China, it seems, has no particular use for Star Wars.

There has been plenty of speculation accounting for this. Some cite crucial cultural differences between modern America and contemporary China: one review on a RottenTomatoes-like site bemoaned the bumbling incompetence of the Galactic Empire, while others have moaned the ordinariness of the films’ cast when compared with more glossily attractive Hollywood and Chinese stars (with one reviewer claiming that Chinese people might like the films better if the turncoat hero Finn, played by new-ish-comer John Boyega, were portrayed by Will Smith). While the low-key, relatively unknown status of the rebel heroes has long endeared Star Wars to western audiences, it seems that Chinese filmgoers are partial to more recognizable, conventionally hunky heroes.

But if there’s one factor which seems to undergird China’s collective shrugging ambivalence for the ever-expanding adventures of rebels and Jedi and droids inhabiting that galaxy far, far, away, it’s something that the Star Wars franchise has come to increasingly depend: nostalgia. Or rather, a lack of it.

In 1977, when the original Star Wars was reshaping the commercial possibilities of cinema in America and emerging as a certified worldwide cultural phenomenon, moviegoers in mainland China were left with more conservative entertainments. Among the biggest movies screened in China in 1977—indeed, some of the only movies—were Fire Over the Yan River, a war film about the communist People’s Liberation Army’s efforts to reclaim a key base during the 1947 Chinese Civil War; Youth, a drama of a deaf-mute teen girl who enlists in the military; and Defence in the Sky, another war film about Chinese communist forces’ defence against a nationalist incursion. Noticing a theme?

While the story of some hardscrabble rebels toppling an intergalactic evil empire may well have played in a post-Cultural Revolution China preoccupied with depictions of “people’s liberation,” the cultural isolationism of the People’s Republic shut Star Wars out. (Never mind the fact that, in historical practice, China’s self-styled revolutionaries arguably had more in common with Star Wars’s totalitarian galactic Empire.)

It wasn’t until 2015 that the original Star Wars trilogy (and the much-maligned prequel trilogy) premiered in China, just in time for the release of The Force Awakens. While the films had cultivated a small underground cult following, thanks to the circulation of bootleg DVDs and pirated downloads, general audiences were unimpressed by Star Wars. The valuation of supermodel-good looks in movie stars was apparent even then: Posting a review to the Chinese social networking site Douban, one user lamented, “The character design is weak, the leading actress not beautiful, the leading actor not handsome and the action parts like children fighting.”

To generations raised on the films, such criticisms may seem slightly absurd. Is Luke Skywalker a bit pimply and whiny in the original? Sure—but that’s the essence of his everymanish heroism. Do the early lightsaber fights resemble Punch-and-Judy smackdowns compared to the standard of modern superhero blockbuster effects? Well, yeah—but that’s all part of the charm! That very tendency to redeem the films’ ostensible failings proceeds directly from a shared cultural wistfulness for them, and a desire to return to the rough-hewn innocence they represent.

In the West, the nostalgia impulse bathes the original Star Wars trilogy in a warm, redemptive glow. What may scan as clunky acting or low-rent effects hardly matter: What matters more are the memories of being drawn in by these films as a kid, of carefully reenacting rows of action figures, of reenacting laser-sword battles with broomsticks. What matters isn’t even Star Wars so much as our memories of Star Wars.

Not even the 1999-2005 run of original prequels—with their dishwater-dull talk of trade blockades, senatorial intrigue, and grating, bug-eyed, vaguely racist CGI creatures—could manage to dent that nostalgia. If anything, their ostensible lousiness only cast the relative quality of A New Hope, The Empire Strikes Back and Return of the Jedi in further relief. Nostalgia is the hyperdrive engine that keeps the Star Wars franchise humming through the hyperspace of our collective cultural memories, and blasting up the charts of the North American box office.

Unlike the Marvel Cinematic Universe, which functions laterally—asking that audiences make connections between a sprawling set of fairly recent and dramatically interlaced blockbusters—Star Wars is invariably backward-looking, demanding that audiences recall details from 10-, 20-, 40-year-old films and, more importantly, the warm-and-fuzzy memories of those films. (See reactions to The Last Jedi, which saw many fans complaining that the older, broody, standoffish Luke Skywalker was bad precisely because he wasn’t the plucky, confident Luke Skywalker they remembered.) But while such nostalgic, rearview-focussed storytelling is intended to enliven the current crop of Star Wars movies, it risks doing the opposite: ruining them.

Solo—essentially the origin story of Han Solo, a tale which hardly needs telling given how the character emerged fully formed in the original Star Wars—seems especially egregious in this respect. Isn’t Solo’s mystery a major part of his suave swagger? Does anyone care how he met Chewbacca, how exactly he won the Millennium Falcon, or where that spaceships’s dangling gold dice came from? Exploring such meaningless backstory blind-alleys only serve to make the Han Solo everyone knows and loves seem less interesting. What’s next? A whole movie about Bib Fortuna’s tooth-sharpening regimen?

While nostalgia can serve a soothing, pleasant function, as a sort-of amber in which our memories of shared cultural experiences can be preserved, the corporate exploitation of that nostalgia is a corruptive, wholly crass tendency that only serves corporate power of the creatively bankrupt Disney Corp. suits.

So Star Wars’s inability to make a meaningful impact among Chinese audiences offers a compelling perspective. It invites us to consider how people might react to Star Wars in a vacuum, without viewing the films through the redeeming rose-coloured lenses of nostalgia. It demands that the movies stand, or buckle, on their own merits. Tellingly, other popular legacy western franchises, such as the James Bond movies, face similar problems finding substantive audiences in China. Other popular franchises are still banned by Chinese censors, whether for the vulgarity (Deadpool), their negative depiction of Chinese culture (Tomb Raider), or their alleged promotion of superstition (in the case of Ghostbusters). While the Chinese market is no doubt enticingly large, it’s far from being wide-open to American interests keen on globalizing entertainment.

But if indeed Hollywood is heading east—and casting decisions and even entire movie plots suggest that the industry is willing to bend to China’s tastes—then this also portends a possible new hope for a future that doesn’t lean on nostalgia like a crutch. Optimists might speculate that Solo’s recent plummeting at the North American box in its second week office suggests that such hostility is globalizing. What seems more likely is that Solo is just an utterly unremarkable entry in a franchise that tends to be held to a higher cultural standard. This, after all, isn’t just another blockbuster franchise; this is the blockbuster franchise that invented blockbuster franchising.

In lieu of wooing the desired Chinese audiences, Star Wars creative execs have decided to just suffocate other markets, until the only available moviegoing options are a range of different sequels, prequels, side-quels, and undercooked franchise-adjacent adventures. Unlike the Marvel Cinematic Universe films, which are essentially episodic in structure and have been conceived as such since 2008’s Iron Man, Star Wars is surrounded by a nebula of nostalgic specialness, which is inherently diluted when a new movie is cranked out every six to eight months. Soon, any rare, privileged, singular quality the Star Wars movies might be afforded among slates of fatiguing franchise entries will be utterly drained—as hollowed out as the husks of fan’s formerly pleasant nostalgic memories.

It may not be a matter of statistics so much as physics—the bigger the Star Wars universe gets, the emptier it feels.