The bankruptcy of the Conservative Party

Tabatha Southey: 'The Conservative party is not the party of the “Barbaric Cultural Practices” hotline, or the niqab ban. Unless that’s what you want it to be.' 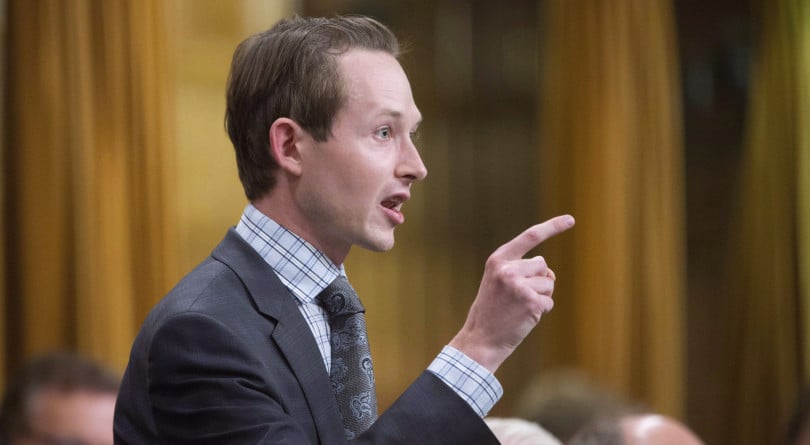 “I find the notion that one’s race, religion, gender, or sexual orientation would make them in any way superior to anybody else absolutely repugnant,” Conservative Party leader Andrew Scheer said a few weeks ago. He was addressing a crowd in a North York banquet hall, “And if there’s anyone who disagrees with that, there’s the door,” he added.

Meaning, it would seem, “There’s the door to the House of Commons Justice Committee’s hearings on the spread of online hate! RSVP, repugnanteers!”

I’m getting mixed signals, Mr. Scheer. Two weeks ago, Michael Cooper, Conservative MP from St. Albert-Edmonton lashed out at Faisal Khan Suri, president of the Alberta Muslim Public Affairs Council, at said committee by reading into the record a portion of the “manifesto” of the Christchurch shooter.

Let that sink in a moment; Mr. Cooper read—citing it as credible—the impenetrably meme-filled manifesto of a white supremacist who killed 50 people while they were worshipping in their mosque. He did so in order to attack a Muslim man who was speaking about the indisputable fact that online hate—most of which targets minorities, and women—leads to real-world violence.

In doing so, Mr. Cooper named the shooter, despite the fact that there is a general understanding that we do not, beyond cursory reporting, give publicity-seeking mass murderers the notoriety they seek.

The Christchurch murderer wrote the names of other killers who specifically targeted Muslims on his weapons, including the Quebec City mosque killer. The man accused of killing 10 people by running them down while driving a rented van in Toronto referenced in a Facebook post the man who killed six students and injured 14 others in Isla Vista and on it goes.

There is a truly horrific international game of entirely unbroken telephone going on right now and that is part of what the committee is meant to be investigating. They should do this as much as possible without signal boosting the players, or their ringleaders. And yet Mr. Cooper read that “manifesto,” bookmarked it, packed it and brought it to that committee where he read it aloud and at no point does it seem to have occurred to him that this stunt was not the big “Gotcha, libs!” he seems to have thought it was. He triumphantly told Mr. Suri that he should “be ashamed” of himself and then seemed miffed that anyone was bothered by his antics, performed as they were before that particular assembly, investigating that particular set of facts.

Look, Mr. Cooper, you don’t burst into a few bars of Helter Skelter at the Manson trial and say, “C’mon, guys, that verse is a banger!” and expect applause.

Maybe, in addition to the much loved “Controversies,” every politician should have a “Speaks to Judgement” section on their Wikipedia page.

Mr. Cooper has since said a sulky pseudo-sorry, followed by a “stupid teacher called my mom” apology and received a polite tap on the wrist from his party leader. Mr. Scheer removed the errant MP from the standing committee a few weeks before the end of the parliamentary session but left Mr. Cooper in his role as the party’s deputy justice critic. This is like sending a child to bed half an hour early, but reminding him not to forget his Nintendo Switch.

That having happened, one would think a party anxious to win an upcoming election in a diverse country would proceed with caution as far as the rest of their hearings on the spread of online hate guest list were concerned. Think again.

The Conservatives appear to have invited an assortment of people who collectively flirt with, or make out with, all the ideas that Mr. Scheer insists have absolutely no place in his party; Last Tuesday, the committee rolled out the blue carpet for former Rebel Media contributor and National Post columnist John Robson, right-wing pundit Mark Steyn and professional former TA, Lindsay Shepherd.

Ms. Shepherd is currently filling the role of “campus free speech fellow” for John “whether it’s the swastika for Nazi Germany or whether it’s a rainbow flag” Carpay’s Justice Centre for Constitutional Freedoms—an organization preoccupied with making LGBTQ students as lonely and vulnerable as possible. Last month Ms. Shepherd was a guest on a white nationalist podcast that has also featured Richard Spencer and David Duke.

On this very special episode White Supremacists Make Shit Up, host Jean-François Gariépy natters on about “population replacement” and “white genocide,” set up by a very comfy looking—erstwhile Faith Goldy handler and white baby counter—Ms. Shepherd. She earnestlessy expressed concern that white people, “already treated with contempt” won’t get affirmative action programs when they are a minority.

One wonders if, when the Conservative Party said “Book her!” they expected their guest to use the parliamentary committee’s time to complain about those seven days during which she was, oh, the humanity, unable to tweet because she had violated Twitter’s terms but that’s what she did.

My God, these days the silenced are deafening.

I’m going to say it one more time, no one is obliged to give you a platform. No matter now arbitrary or inconvenient you find the rules, your free speech is no more being violated when you’re told to take it outside than your mobility rights are being violated when you’re told you can’t come in the restaurant without a tie. Or yell transphobic things at the other customers while you’re there, for that matter. They, like Twitter, have a business to run.

READ: Trans people cannot be erased. We have always existed, and will continue to live.

Ms. Shepherd, for the record, also has some thoughts on rainbows and the effect of the LGBTQ communities’ meterological banditry on our children. First they came for your multicoloured arc caused by reflection, refraction and dispersion of light, then they come for your smiley faced sun and I said nothing, because I’m not really weird about pictures of weather or gay people.

Next up, the committee was treated to Mr. Robson, who, not by coincidence, I think,  recently had a piece in the National Post that downplayed the threat of white nationalism. According to a report by Vice, Mr. Robson told the committee: “Weimar Germany had laws against anti-Semitism and they didn’t stop Hitler.” He also said that people should have listened more closely to Hitler’s statements to defeat his ideas. If only Neville Chamberlain had gone on Hitler’s podcast, Annexation with Adolf.

Mr. Robson said that he had intended to bring a copy of Mein Kampf to the hearing “as a prop,” — clearly he was concerned his presentation was not sophomoric enough—-but he forgot it.

Reading internet comments like “Hitler should have finished the job, blacks are inferior,” he said: “There is no possibility that we’re going to wake up and realize one day that this is true.” As if those comments are not written, shared and upvoted every day by a lot of people who absolutely believe them, some of whom are inspired, egged on even, to act at synagogue after synagogue after synagogue, and church after church.

You invite Mark “global jihad lurks within Islam and Islam is a political project” Steyn and you know exactly what you’re going to get and the committee got it. Mr. Steyn was glib about having said a lot of alamist things about Muslims taking over the world, by birth and force, and eventually taking all your freedoms. He was mostly furious that people weren’t kinder to that nice Mr. Cooper, whose performative “umbrage” — as Mr. Cooper called his emotional state— taking Mr. Steyn seems to feel needs more airtime.

“Multiculturalism is really a suicide cult conceived by the western elites not to celebrate all cultures, but to deny their own. And that’s particularly unworthy of the British, whose language, culture, and law have been the single greatest force for good in this world,” Mr. Steyn has written. His style is best described as a ‘one-note manifesto’ and that a Canadian political party felt the Justice and Human Rights Committee needed to hear from him in particular ought to raise a lot of questions.

All in all, it was as productive as a morning spent trying to squeeze expertise from a YouTube comment thread. In answer to all this paranoid rambling and pontificating, Liberal MP Nathaniel Erskine-Smith asked the three guests to name “one time the Criminal Code has been improperly applied to hate speech over the last 50 years,” and of course they couldn’t. To Ms. Shepherd he said, “The last thing I will say is that it’s not just the end of Ramadan today, but the 75th anniversary of D-Day. Ms. Shepherd, when you go on YouTube and you embrace the views of population replacement with a white nationalist, remember who the Nazis are.” At least the day wasn’t a total loss.

Asked if she wanted to respond, Ms. Shepherd just said, “No.”

Experienced parliamentary scaremonger and Incel whisperer, Jordan Peterson, who has wondered aloud, “Do feminists avoid criticizing Islam because they unconsciously long for masculine dominance?” and also stated this thing as fact, was also, according to parliamentary reporter Justin Ling, invited to the committee but he was a no-show.

Possibly Peterson is just exhausted from his meeting with Viktor Orbán, arranged during his recent trip to Hungary. Peterson gave an interview while there in which he said “It is not clear to me that Islam would be compatible with democracy,” in case you see a theme emerging with the Conservative guest list.

No doubt having palled with his new buddy, Peterson will soon be back fighting that true grave, authoritarian threat to personal liberty and freedom of speech; appropriate pronouns.

There is a word that Ben Shapiro—most recently of “angrily storming out of a BBC interview intended to promote his book on the importance of civility in public discourse” fame—was also invited. During that interview Mr. Shapiro mistook polite but firm questioning about his own history of adding phrases like ‘Arabs like to bomb shit and live in sewage’ to said public discourse as evidence that well-known conservative commentator Andrew Neil was “on the left.”

Surely there is no better way for the conservative movement to advertise its intellectual bankruptcy than by hailing Ben Shapiro as a bright light, as they tend to do. It’s like they’re running a “We’ve Got Nothing” ad blitz. Every time I turn around I get the message again, “No, really, we’ve got absolutely nothing!” Ben Shapiro’s virtuoso performance— he makes viciousness vaccouous—is an ad on high rotation. “Ben Shapiro is an idiot” here, “Ben Shapiro is an idiot” again and again. Yes, I get it, American Conservatives, you can stop now. Ben Shapiro being a fool is like a duct-cleaning spam call and this is who Canadian Conservatives wanted to hear from?

It just seems to me, Andrew Scheer, that if you were sincere in that “there’s no room in the Conservative Party for racists, homophobes and general bigots” thing, you wouldn’t have curated your guest list for the parliamentary hearings exploring online hate from the Louder with Crowder greenroom.