Letters to the editor, Feb. 2, 2021: Readers weigh in on the the hopes and fears for 2021, the end of Trump's presidency and the complicated factors in Thomas Chan's case 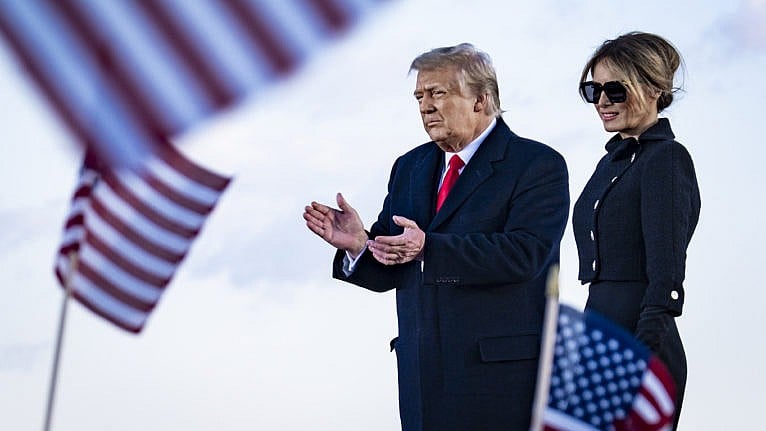 Donald Trump and Melania Trump on stage after speaking to supporters at Joint Base Andrews before boarding Air Force One for his last time as President on Jan. 20, 2021 in Maryland. (Photo by Pete Marovich - Pool/Getty Images)

The meaning of urgency

While I understand Scott Gilmore’s point, not everyone has the luxury of being paid for late submissions and maybe not showing up to work, etc. (“The end of urgency,” Work, December 2020). Tell that to all the front-line health-care workers, support staff at long-term care facilities, along with the farmers producing the food to feed everyone through the pandemic, food production and grocery store workers, teachers—the list is endless! Consider what urgency means to them.
—Liz Hudson, Kinburn, Ont.

Many thanks for an excellent look at the new year (“2021,” The year ahead, January 2021). After much laughter in this household generated by the photos and captions of our Prime Minister and Donald Trump, I must comment on the situation beneath our international border. The pieces by Paul Wells (“Relationship advice”) and Adnan R. Khan (“Trump reloaded”) resonated with me: I simply cannot believe that so many American voters remain true to their belief that the election in November was stolen. Meanwhile, many largely unread and unsuspecting citizens continue to lose whatever faith they had in government institutions, courts of law and the fair conduct of elections. Do you suppose Congress would consider something as commonsensical as election campaign finance reform legislation? Oh right, that won’t work because some billionaires will maintain that this is an attack on their individual rights. The donation of unlimited funds to candidates of either political party from wealthy individuals and corporate sources is overt corruption, plain and simple. The piece by Shannon Gormley (“President on the lam”) was entertaining, but the best country for Trump to be contained in is the one he lives in now. He needs to face up to every one of the civil and criminal lawsuits that have been in the pending file during the past four years. And it is emphatically not comforting that so many of the deniers of the election results carry heavy assault rifles as a matter of right. To think that so much of the ongoing trouble is caused by members of the party of Lincoln, the Great Emancipator. He was rewarded with a bullet to the head after a single term of office. What can possibly happen next?
—Rod Drennan, Vernon, B.C.

Thank you to your writers for their thoughtful and provocative perspectives on the year ahead. I found your editorial, “Decanting prisons,” particularly striking. You note the average federal inmate costs taxpayers $125,000 a year. As a writer for what was then called the United Church Observer, I noted about 60 years ago that the annual costs were $25,000 per inmate. Surely there is a better way. Perhaps Maclean’s could devote a whole magazine or a series to this important social issue.
—Rod McLeod, Regina

As a newsmagazine whose mandate is to report both local and global news, I would like to know what the rationale has been for keeping one of the worst humanitarian crises out of your publication during the past several issues. In the “Year Ahead” issue, there is no mention of what is happening in Yemen. Your map noting moments to watch around the world in 2021 (“What on Earth,” World, January 2021) has nothing about this crisis. Oddly, though, Trump gets four pages of coverage. Canada’s role in the Yemen conflict is supplying military-related vehicles to Saudi Arabia, thereby making our position as a peacekeeping nation one of hypocrisy. If the health of democracy is being threatened, as some would have us believe, you can also add the credibility of journalism to that list. Reporting on the ugliness and darkness in that part of the world might not sell magazines, but it is the right thing to do.
—Carl Van Harten, Orangeville, Ont.

In “What recovery might look like” (Taxes, January 2021), Angela Wright quotes sources that argue that Canada’s current tax system “skews toward benefitting society’s wealthiest—and increasing taxes on wealthy individuals and corporations and closing tax loopholes would not only be more politically palatable to an electorate experiencing financial unease, it would also make the tax system more fair.” The sources also argue that municipalities and/or provinces should be given more access to income tax revenues to maintain the services they provide. These are hard times for businesses, governments and individuals. In hard times, everyone tightens their belts and tries to get by with less. Yet our governments seem to think they can keep spending like they have plenty of money. I don’t understand, for example, why our municipal government in Calgary thought it was wise to spend money on traffic-calming and bike lanes in a pandemic year. Inevitably, when the governments run out of money, they start thinking of ways to raise more taxes. Cut spending first. Taxing the wealthy will lead to the wealthy taking their investments elsewhere. We need investment to create jobs and diversify our economy. Taxing the wealthy is a socialist “tool” that bankrupts countries.
—Don Pasquini, Calgary

For a Canadian letter-writer to say that the transgressions of Prime Minister Justin Trudeau far outweigh those of Donald Trump is at the very least preposterous (“Too many sins,” Letters, December 2020)! I hope this view was tongue-in-cheek.
—Tom Roberts, Waterloo, Ont.

Having just read your November issue covering universities in Canada, I was appalled to learn that international students have to pay tuition fees that are four to five times more than those for domestic students (“Extra-remote learning,” International students, November 2020). This is nothing but grotesque financial exploitation. A foreign student gets the same course as locals, and the same services. The universities now appear as nothing more than massive, exploitative, profit-making financial machines.
—Hendrik S. Weiler, Port Perry, Ont.

I am a Canadian living with disability, chronic illness and pain (“Dying for the right to live,” Health, December 2020). I struggle with employment and related issues. I often feel like my voice is diminished as a result of being considered less productive in so many ways, especially in a capitalist world. I believe that having the choice to have medical assistance in dying (MAID) for intolerable suffering would help me endure these problems much better. The idea of being held against my will in a life of suffering strikes me as indecent and primitive. In Canada, the courts and the Constitution have said this cannot be. I have been seeing a lot of disabled citizens on various social media platforms lamenting that, because of poverty, they simply have no choice but to apply for MAID. Many people replied offering sympathy and outrage that our most vulnerable citizens were being threatened in this way. My reaction is a bit different. I see this as a form of hostage-taking. People with disabilities are not a monolith, but sadly the anti-choice side and the groups that line up behind it speak as if they are. Poverty is not a valid criteria for MAID, and no one can be forced to pursue it. And when it comes to removing the exclusion of people for whom death is not reasonably foreseeable, clearly too many of my fellow disabled friends are anti-choice. They seem to be telling the world, “Don’t trust me with making decisions about my life! If given choice, I will abuse it!” Having a disability does not make me less capable of making medical decisions that have an enormous impact on my life. It shouldn’t have to be reiterated that this is my body and this is my choice.
—Adam Andrews, Chilliwack, B.C.

As usual, there were many thought-provoking articles in the December print edition—thank you—including the piece about the left (“The battle for the left,” Politics, December 2020). There is only one way for the NDP to progress and that is to define the policies they think are needed and then go all out and sell them to the electorate. For this to work, the policies have to be solid, pragmatic and defensible so they can be passionately and clearly communicated to the public, and able to withstand attacks from the other parties. I think the NDP has already focused in on some great key ideas. The next step is to effectively sell them (unlike Stéphane Dion, who had a great idea with the carbon tax but couldn’t counter the Conservatives taking control of the message) and then follow through on enacting them (unlike Justin Trudeau with proportional representation). I hope Jagmeet Singh’s current campaign to have Trudeau establish a citizen’s assembly on electoral reform will bear fruit, as I think proportional representation will allow parties to be braver and more true to themselves from a policy perspective, because they will then receive a fair number of seats based on the votes they receive. Also, a fair chunk of the Liberal vote will likely transfer to the NDP and Greens, as many people vote red to keep the Conservatives at bay. It seems like Singh definitely needs to be much more proactive in letting Canadians know about their successes based on his “I think people will know that we fought for them” comment. How would that come about exactly? Subliminal messaging? All things considered, it’s going to be a long, hard road for the NDP to travel alone. I wonder what colour you get if you mix green and orange?
—Graham Tarling, Victoria

Back when Henri Daviault was before the courts (“Does Thomas Chan belong in prison?” Law, December 2020), I was working in community development for the Addiction Research Foundation (ARF), then one of the most respected substance use organizations in the world. As I recall, after a great deal of research and discussion, several of our senior scientists presented information and advice to the Supreme Court on the case. The bottom line: Daviault had not experienced “automatism” and he was culpable because he chose to drink to the extent that he was severely intoxicated and then sexually assaulted a vulnerable woman. As someone who studied and learned a great deal from my 20-year career with ARF, which I still value highly, and as a feminist, I still support that position, although the Supreme Court chose not to. The balance regarding individual responsibility for actions and their consequences is often complicated. There are confounding factors in the Chan case—might the cumulative effect of concussions and/or his youth have been a factor? We know now that the prefrontal cortex is not fully functional until around age 25. Was he capable of making an actual informed decision? So, in his case, there is perhaps a question of degree of responsibility. From what little I know of David Sullivan’s case, and what I remember of Daviault, this does not apply to their cases. If these individuals are not responsible even for their initial risky decision to overconsume mind- and mood-altering substances, which led to crimes, what are the implications for other laws, other cases? What happens to our impaired-driving structure? This is not as black-and-white a situation as was presented in the article. And I hope to everything that’s sane and holy and protective that Section 33.1, the government’s response to the original Supreme Court decision that held Daviault not criminally responsible, is not overturned.
—Kathleen Kilburn, Redbridge, Ont.