The blockades no one talks about devastate Indigenous economies

Pam Palmater: A giant, well-enforced wall of laws and regulations has kept Indigenous peoples from hunting, fishing, fowling and gathering. Our traditional economies have been criminalized to maintain a non-Indigenous monopoly. 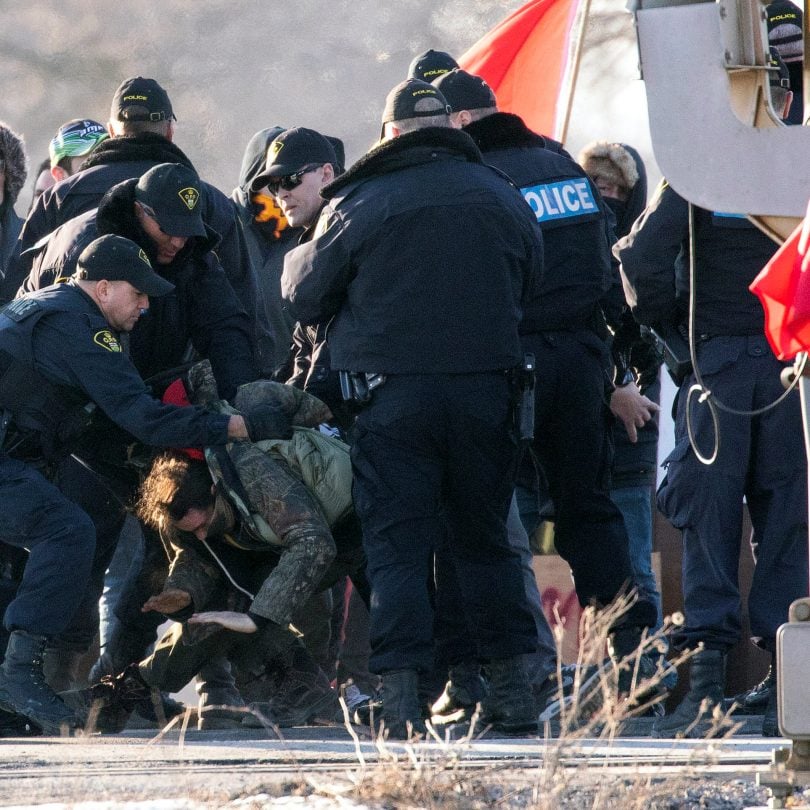 Police officers make an arrest during a raid on a Tyendinaga Mohawk Territory camp next to a railway crossing in Tyendinaga, Ontario, Canada February 24, 2020. (Carlos Osorio/Reuters)

Over the last few weeks, government officials and political pundits have consistently relied on economic concerns to justify the arrests of those engaging in peaceful solidarity actions near railway lines. On Feb. 21, after Prime Minister Justin Trudeau announced that the blockades must come down, the Ontario Provincial Police (OPP) moved in and arrested some of the Wet’suwet’en solidarity activists at Tyendinaga Mohawk Territory. Again, the pundits and politicians argued that there was no choice but for police to act, as Canada’s economy was in a crisis.

This was a strategic move to deflect criticism and to distract from Canada’s multiple breaches of its own rule of law, which includes protecting Indigenous land rights and the right for Indigenous peoples to govern themselves according to their own laws. There was also very little talk about the breach by the RCMP and OPP of the Charter-protected freedom of the press, which was denied. In the RCMP invasion of Wet’suwet’en territory, the RCMP denied media from covering the event, threatened to arrest journalists for taking photos and removed reporters from the scene. Similarly, the OPP kept the media so far away they could not record the arrests in Tyendinaga.

Indigenous peoples and other Canadians have stood in solidarity over the last few weeks in response to the RCMP’s aggression. Governments should have predicted that a repeat violation of Indigenous rights at Tyendinaga Mohawk Territory would inspire even more peaceful solidarity actions, which it has and will continue to do.

But no one is talking about the most economy-crippling blockades that have devastated Indigenous economies for the last 150 years. Those are the blockades legislated by federal and provincial governments and enforced by armed police and military. Canada’s laws, policies and practices have created a complex web of blockades that have kept Indigenous peoples from freely engaging in their traditional economies.

There is a giant, well-enforced wall of laws and regulations that have kept Indigenous peoples from hunting, fishing, fowling and gathering, as they had always done before contact with the Europeans. Indigenous peoples also engaged in the trade of these items. Our traditional economies, such as fishing lobster or cutting timber for trade, have been criminalized not because of any inherent threats to public safety or other valid legislative objectives, but to maintain the non-Indigenous monopoly of those engaged in these industries.

One particularly striking example of the criminalization of traditional Indigenous economies is that of the growth, manufacture and trade of tobacco by the Haudenosaunee. Long before Europeans even knew about tobacco, it was a part of Indigenous economies. Once Europeans realized they could commodify this resource, they assumed control and criminalized it for Indigenous peoples. Mohawks who engaged in the sale of tobacco were labelled criminals; their products were considered illegal contraband and their stores were raided by police.

The Mi’kmaw Nation in Eastern Canada have inherent rights, as well as constitutionally protected, treaty–recognized rights, to fish and trade in fish. Yet, our peoples have never been able to freely engage in the fish trade without police and other enforcement entities arresting us. In 2018, the CBC discovered that the federal Department of Fisheries and Oceans was secretly microchipping lobsters to try to catch Mi’kmaw selling lobster instead of using them for food.

All of these economic blockades that have been imposed against Indigenous peoples for well over a century have crippled our economies and our ability to provide for our families and nations. They have forced First Nations and Inuit peoples to rely on chronically underfunded federal rations. The policy has had a devastating impact on health and lifespans; Indigenous peoples live 15 years less than other Canadians.

Why doesn’t the RCMP, OPP or any other police agency go in and remove these illegal blockades that run counter to Aboriginal and treaty rights, as well as Indigenous, Canadian and international laws? Where is the outcry for the inconvenience experienced by Indigenous peoples or the loss of jobs from these oppressive economic blockades?

If anyone thinks that Indigenous resistance to these illegal blockades will end any time soon, they’re mistaken. Indigenous peoples have been pushed to the edge. Navigating Canada’s genocidal policies has taken a terrible toll on our peoples with significant loss of life.

It’s time for Canada to sit down and talk about fair distribution of land and resources, and the end of Canada’s blockades against our economies, once and for all.

This article appears in print in the April 2020 issue of Maclean’s magazine with the headline, “The blockades no one talks about.” Subscribe to the monthly print magazine here.