The climate crisis is our biggest public health threat

Jane Philpott and Samantha Green: To tackle a global climate catastrophe, we should study how society has successfully faced other health crises 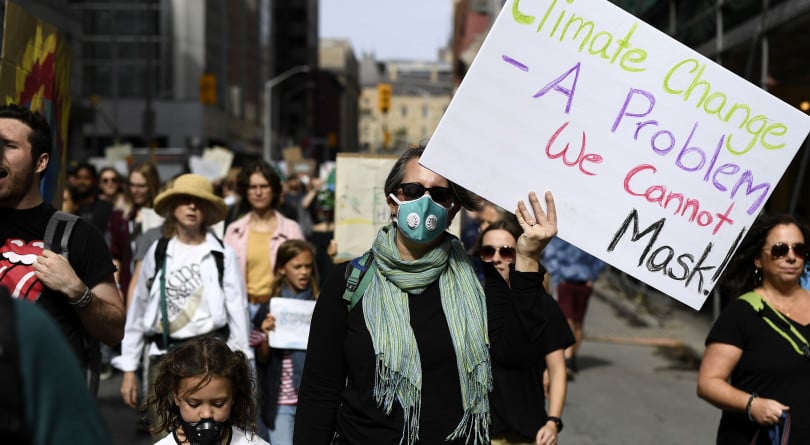 A woman and child wearing masks march in Ottawa as part of a Global Climate Strike, protesting against climate change and inaction, on Sept. 27, 2019. (Justin Tang/CP)

Jane Philpott is a medical doctor and former Member of Parliament. From 2015 to 2019, she served as federal Minister of Health, Minister of Indigenous Services and President of the Treasury Board. Samantha Green is a Toronto family physician and a Canadian Association of Physicians for the Environment board member.

The climate crisis makes us worry about the future for our children and grandchildren. As wildfires ravage Australia, we witness the dangers for the planet and its populations. Climate change is the biggest health crisis of this century. As family doctors, we see its impact on patients. Candace, for example, has severe asthma, and lives alone in Toronto Community Housing. She cannot afford an air conditioner and gets short of breath on extreme heat alert days. She fears dying alone in a hot apartment.

Canada is responsible for 1.6 percent of global emissions. This sounds small but we are the top emitter per capita at 21 tons per person per year. The global benchmark for a sustainable climate is less than two tons per person, per year. With this crisis at hand, we should study how society has successfully faced other threats to population health.

MORE: Can the courts legislate action on climate change?

For example, doctors responded to AIDS by doing more than treating individual patients. They joined activists and people living with HIV to challenge government inaction. In 1989, doctors joined with the AIDS Coalition to Unleash Power (ACT UP) and Toronto’s AIDS Action Now! to seize the stage at the International AIDS Conference in Montreal. They demanded access to experimental medications and ethical clinical trials.

AIDS is still a difficult global problem with no single solution. A cure is yet to be found. Mitigating the crisis is not simple and HIV/AIDS is not solved. Each day some are infected with HIV and others die of AIDS-related illnesses. But treatment is available. AIDS-related deaths have decreased more than 55 per cent since its peak in 2004.

There are lessons to take from AIDS that are applicable to the climate crisis. First, it takes multiple strategies, many people, collaboration, time, and patience to solve complex problems. Climate scientist Edward Maibach says we need “simple clear messages, repeated often, by a variety of trusted voices” to cause change. It took sit-ins, civil disobedience, careful research, meticulous advocacy and activism from artists and human rights campaigns to awaken the world to AIDS.

Second, like AIDS, the climate crisis is complex and seems impossible to solve. In the ’80s and ’90s, there was extreme despair around AIDS. Millions were dying. There was no treatment and no political will to find solutions. But activists worked relentlessly to find and disseminate a treatment. They had no choice. People involved in climate change work also experience hopelessness. Greta Thunberg has been successful leading the climate strike movement because it brings hope to people frozen with despair. People start to believe the crisis can be mitigated.

Finally, there are co-benefits in taking action to solve complex problems. The AIDS response contributed to the empowerment of the LGBTQ community. It sparked a broader patient-rights movement. It highlighted the connection between public health and marginalization. The parameters of medical research shifted. Prior to AIDS, condoms were seen simply as a form of contraception. Now they are widely used to prevent sexually transmitted infections.

Solving the climate crisis will likewise bring co-benefits. Decreasing use of fossil fuels not only decreases emissions, it improves air quality and decreases pollution-related harms. Ontario depended on coal for 30 per cent of its electricity. It closed all six of its plants in 2014 resulting in a decrease in smog-alert days and fewer asthma exacerbations.

MORE: The climate crisis: ‘Yes, we should be scared.’

Investment in active transportation also has co-benefits. People who cycle to work have a 50 per cent decreased risk of heart attack and a lower incidence of depression and dementia. Investing in bicycle and transit infrastructure will improve the health of our planet and individuals. A plant-based diet decreases the risk of diabetes, high blood pressure, heart attack, stroke and some cancers.

What can individuals do about the climate crisis? Talk to friends, family, neighbours, and politicians about it. Live a more climate-neutral life—decrease car and air travel, decrease meat consumption; turn off air conditioners. We don’t have to be perfect, but we can be better.

The biggest emissions come from the oil and gas industries, but these can decrease with technical innovation and better government policy. So, get politically engaged. A price on carbon is an important start. Ask political parties if they will invest in fossil fuels and pipelines, or renewables.