Jen Gerson: There's room for a Tory opposition that makes a sensible critique of COVID restrictions—and no sign this party is ready to fill it 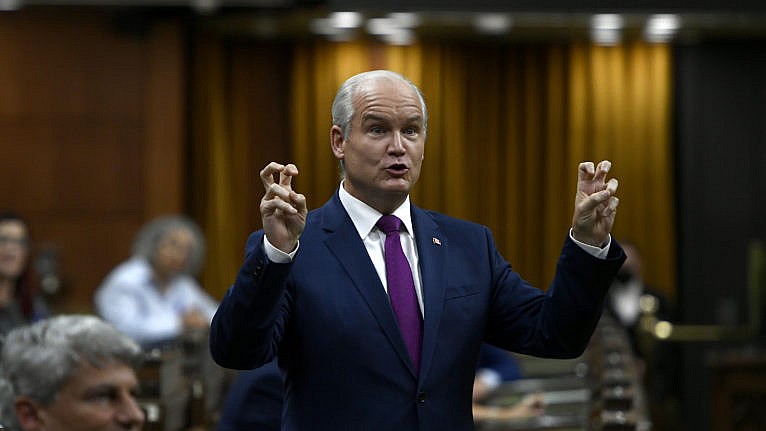 O'Toole during Question Period last June. On Wednesday, the Conservative caucus voted to dump him as leader. (Justin Tang/CP)

Well, it looks like the Conservative caucus has decided to do the stupid thing.

Shortly after the election, I wrote here at Maclean’s that dumping leader Erin O’Toole would be short-sighted—regardless of how angry anyone was over the disappointing results or their leader’s performance. Very few nail it on their first time out, and there were plenty of indicators suggesting O’Toole’s moderate conservatism did, in fact, make inroads on the crucial 905 region.

Alas, after the trucker convoy pulled into Ottawa, drawing support from Conservative MPs and a meeting with O’Toole himself, a substantive majority of the Conservative caucus decided that my argument wasn’t compelling enough to warrant giving O’Toole another shot at becoming Prime Minister. And so they decided to oust him at the moment of maximum chaos, when a manifestation of inchoate anger at long-running—and sometimes illogical—COVID restrictions has descended on the capital, along with a handful of Confederate-flag and swastika waving extremists. Great timing, everyone.

I’m sure that this is all going to be very reassuring to the Canadian swing voters who are sick of the Liberals but were too concerned with the wingnuts in the Conservative caucus to pull the switch. I wrote during the election that there was something about the Conservatives that didn’t feel ready for prime time; and real concerns that O’Toole didn’t have a handle on his caucus. Those who stuck with the Liberals on these grounds have been justified.

Very well, then. The Conservative Party is now confronted with a full-blown crisis of identity, and none of the incentives bend toward moderation. Now that they’ve booted the last leader for flip-flopping and failing to be Conservative enough, any future leader will be required to placate the most extreme elements in the caucus room. It’s possible that this will not lead to a bad outcome.

It’s possible that I have misdiagnosed the electorate, and that the more conservative Conservatives are correct; that swing voters are not looking for a skim-milk Conservative Party, and that they are instead eagerly seeking a robust right-wing alternative. After all, why throw your lot for the unknowns when all they’re offering you is a slightly modified version of the Liberal Devil They Already Know?

I find at least one aspect of this argument compelling.

Conservative voices have already pointed out that the party’s failure to articulate sensible opposition to the more nonsensical COVID restrictions has pushed otherwise sensible people to the fringes of politics. We are seeing this in the rise of the People’s Party of Canada, and in the trucker convoy itself.

It would have been awfully nice to have a true opposition party in Parliament in recent months; one that was willing to point out that our dependence on lockdowns is predicated on the fragility of our health-care system compared to peer nations. Our drive to make our universal health-care system more efficient in recent decades left it ill-equipped to manage the historic demands of a once-in a generation pandemic. Our lack of surge capacity is a systemic problem we’re going to need to confront. That process is going to challenge old pieties about the status quo about how health care is funded and delivered.

Many would have welcomed an opposition that felt much more empowered to point out that the vaccine mandate on truckers actually won’t do much to staunch the spread of Omicron while needlessly placing fragile supply chains at risk. Or maybe the CPC could have been more vocal in pointing out that requiring PCR testing for vaccinated travellers presents a ridiculously expensive and onerous restriction on free movement—and unnecessary one when rapid antigen tests are widely available.

And two years into this pandemic, what is the real value of vaccine passports when Omicron is clearly blowing through vaccine-acquired immunity? By the way, those cloth masks aren’t doing much good for you anymore, either.

At this point, it’s pretty hard to ignore some uncomfortable truths; some COVID restrictions still make sense. Others do not. And some are guided more by politics, optics and tribalism than by science. An opposition party really shouldn’t be afraid to make that point.

Perhaps if the sizeable and growing minority of anti-lockdown protestors felt that they had a voice in Parliament, they wouldn’t be descending on major cities and border crossings en masse. The wobbly-eyed chickens are coming home to roost, and they’re driving very large trucks that the Ottawa police department has admitted it is helpless to manage.

Anyway, it’s quite possible that after several years of increasingly nonsensical COVID restrictions, and however many years of a Liberal government, a plurality of Canadians really won’t be looking for Liberals painted blue. It’s possible that the charm of performative politics that papers over our crumbling institutions, declining capacity, and a self-flagellating political culture will have very much worn off. It’s possible people are going to be looking for something very different.

Perhaps there will be room for a Conservative Party to articulate rational and sensible opposition on the host of problems that face this country—from economic woes and institutional capacity challenges to fear-and-panic driven COVID restrictions.

But can we trust a party of sh–posters to stay rational and sensible in the face of an exhausted, angry and increasingly polarized electorate? Nothing about how this party has behaved in recent days gives me hope that this caucus is as clever or politically savvy as it imagines itself to be.