The context of Jordan Peterson's thoughts on 'enforced monogamy'

Peterson talking about the importance of enforced monogamy isn’t alarming because it’s been taken out of context, says Tabatha Southey—it’s alarming precisely because of its context 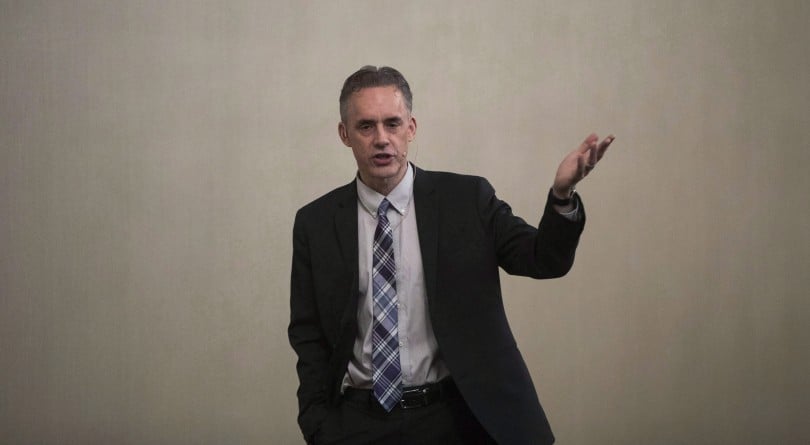 Jordan Peterson speaks to a crowd during a stop in Sherwood Park Alta, on Sunday February 11, 2018. THE CANADIAN PRESS/Jason Franson

Jordan Peterson, the man who launched himself into lobster-dominance-spouting prominence by melodramatically, energetically, and completely misrepresenting Bill C-16 as the free-speech end times on YouTube and in Senate hearings, is mightily upset that some people may not be parsing his endorsement of “enforced monogamy” in a properly measured and researched manner.

That’s right: this is a man who framed a wee bit of since-passed legislation that extends the same human rights protections already afforded based on sex, race, etc. to transgender Canadians on the federal level—which some provinces had already done years ago—as a nation taking the fast road to the gulag. And he thinks people are being alarmist about his proposed solution to the problem of male violence.

Peterson revealed his views in a dynamite New York Times profile last weekend in which he offered what can only be described as a rationale—or more accurately, support—for an already articulated rationale about the alleged killer who drove a van into a crowd, killing 10, and appears to have posted a grandiose mission statement on Facebook that hailed a previous killer driven by the same ideology. And Peterson made it clear, he gets it.

“He was angry at God because women were rejecting him,” Peterson said of the alleged Toronto killer. “The cure for that is enforced monogamy. That’s actually why monogamy emerges.”

With these statements, the University of Toronto psychology professor, bestselling author and sex know-it-all is pretty much saying “I feel your pain, men, we should address that,” and the incels appreciated his approval. “Violent attacks are what happens when men do not have partners,” is how the New York Times’ Nellie Bowles summed up his thoughts. Following custom, his thoughts disregard the staggering number of women who are abused and killed by their partners, often when they try to leave as in “Why didn’t you leave?”

Peterson also offers tacit support for another core incel belief. He endorses the idea that some men are being denied sex because other men are taking all the sex from women who are allowed to choose to give them that sex, and that if something could be done to prevent all this “having sex with people of your choosing” nonsense, some unlucky women would eventually have to settle for the incels. If we could just make that happen, these men would not have to be so “angry at God” and commit mass murder, the argument goes.

READ MORE: The misunderstood history of the incel movement

Except monogamy rates are in fact very high just now, even as incel culture rises. And anyone who thinks that love, once upon a time, did not go unrequited, needs to spend less time opining on the universal genetic truth underlying all stories and more time actually reading.

Peterson’s words were understandably met with criticism from those who didn’t throw the paper across the room when they got to his insistence that witches “certainly exist” and live in swamps. (Swamp witches, according to the self-styled “very serious person,” apparently exist “absolutely more than anything else,” like dragons.)

Peterson, ever the sensitive flower, appeared upset by the criticism and laughter inspired by the profile. The same guy who proclaimed that passing a law that makes assaulting or calling for the genocide of people because of their gender identity a hate crime was the “vanguard” of a marxist “ideological war” destined to plunge Canada into a dystopian nightmare was unhappy that some people saw his enthusiastic promotion of “enforced monogamy” somewhat troubling.

“My motivated critics couldn’t contain their joyful glee,” he wrote in a testy blog post, causing me to wonder: has the good professor identified some other kind of glee? (Although, to be fair, if there is such a thing as “miserable glee,” Peterson sure comes across as the grumpy muppet best suited to finding it.)

READ MORE: Jordan Peterson’s people are not who you think they are

Earnestly citing the work of Reddit commenter antiquark2—who explains that Peterson did not mean “government-enforced monogamy,” he “meant socially-promoted, culturally-inculcated monogamy”—Peterson complains that his critics’ “abject ignorance of the relevant literature does not equate to evidence of my totalitarian or misogynist leanings.”

If you’re thinking that antiquark2 may not be the most effective ally Peterson could call on, think again. Antiquark2 is not only a moderator of that respected academic society reddit.com/r/JordanPeterson, they also moderate such esteemed organizations as /r/Jordan_Peterson_Memes and /r/JordanPetersonLetters. Antiquark2 is one of the great multidisciplinary geniuses of our age, a true renaissance redditor.

Relax, Jordan—and relax too, antiquark2—never for a second did I think that you were calling for “arbitrary dealing out of damsels to incels,” as Peterson claimed that some critics had concluded. But what the ever-coy Peterson doesn’t say is how exactly Canadian society doesn’t already “enforce monogamy” by that definition, or what he would like to see change to prevent men from becoming homicidally “angry with God.”

By the way, we appreciate the shoutout, but we’re just women. And if you think we have ever, collectively or individually, had the power to stop men from raping and killing, you must believe we’ve been woefully lax in exercising it. I imagine you’re expecting at least a mea culpa on all the married serial killers—maybe a “Sorry about that Timur-e-Lang business, we’d just put something in the oven.”

Write about Peterson, as I have done, and one will be quickly and angrily accused of not having watched all his videos. I assure you, I’ve watched so many of those videos my YouTube recommendations are forever sullied. If there is one thing I have learned from Peterson, it’s that Incognito mode is your friend. Question Peterson and you will also be told his IQ, over and over, about which I can only say, if you are a public person and I know your IQ, you are a moron.

Critics are frequently berated for “taking him out of context.” So what I want to do now is put Peterson’s own words in context.

Jordan Peterson is a man who has said that feminists have an “unconscious wish for brutal male domination.” He’s a guy who rails against divorce, and the birth control pill because women would likely be happier if they “allow themselves to be transformed by nature into mothers,” and because allowing women to choose anything other than motherly transformation leads to declining birth rates “in the West” that might “do us all in.”

In case you were thinking, “Hey, that sounds kind of racist,” have some more context: Peterson says “no one can talk about” about that last bit because of “egalitarianism and diversity.” The context of his interest in “enforced monogamy” is that this is a man who thinks women who don’t want to be sexually harassed at work are “hypocritical” if they engage in a “sexual display” by wearing makeup. Peterson admonishes us that women and men working alongside one another is just an experiment, one that is only 40 years in. The man’s grasp of history is so shallow that if he ever goes back to teaching at U of T they might want to get a lighthouse put in his brain so the undergrads don’t run aground there. The professor warns us that it just might not be possible for men to spend eight hours in the same workplace as a woman without harassing her and explains that that “almost all of the hyper-productive people are men” and women aren’t really driven to work at the top anyway.

Peterson talking about the importance of enforced monogamy isn’t alarming because it’s been taken out of context; it’s alarming precisely because of its context. If, as Peterson argues, our “dead-end” non-monogamous society can be largely blamed on birth control, what is the best way to turn back the clock to the days before the pill and “whiny” feminists who should just get hobbies?  Peterson says he never suggested “government-enforced” monogamy, merely “socially-promoted, culturally-inculcated” monogamy. Let’s take him at his word. If pulling the pill off the market isn’t an option, do you just “socially promote” women not using it? Do we build a database of all the pharmacies that sell it, hoping to drive them out of business?

What does that look like? Given the context that is Jordan Peterson, it’s hard not to think it looks like shaming women for refusing to conform to their proper archetypal role as mothers, producing what really matters—heroes and, of course, slaughter-preventing sex-providers. Perhaps, coming from the man who views attempts to foster gender equality as part of a “murderous equity doctrine,” it looks like pushing women out of the workforce, quietly passing them over for men for, you know, their own good.

If, as Jordan Peterson pinky-swears, it doesn’t involve the government trapping women in abusive marriages by restricting divorce, does it mean ramping up the shaming of single women, blocking them from fully participating in public life, putting back some of those barriers that only recently fell away? Single women have long been a punchline in the same circles now busily making single men a righteous cause. That is not incidental.

Let’s expand our search. Peterson is very clear he didn’t mean we should start taking social policy from dystopian sci-fi, but maybe monogamy-enforcing laws from the very recent past are more acceptable. Do we ensure women properly transform themselves into mothers by limiting access to abortion? As recently as the 1980s it was legally impossible to “rape” or “sexually assault” your wife in Canada. If we accept not having sex as inevitably causing male violence, do we go back to the days where arguing that raping your wife should be a crime would get you laughed out of the House of Commons?

Whatever the fears of pearl-clutching social conservatives and the hopes of hippies, free love never really took off. If our society values monogamy noticeably less than in the past, it’s only in not prioritizing monogamous relationships over the quality of the lives of the women in them.

It’s possible that Jordan Peterson never meant anything like this at all when he sang of “enforced monogamy.” But until he decides to follow his own tenth Rule for Life and be precise, I’ll let his past words speak for themselves.