The curious incident of the American mass protest

Scott Gilmore: Democracy is fraying, mass shootings occur daily, white supremacy is marching forward. Why are the streets so empty? 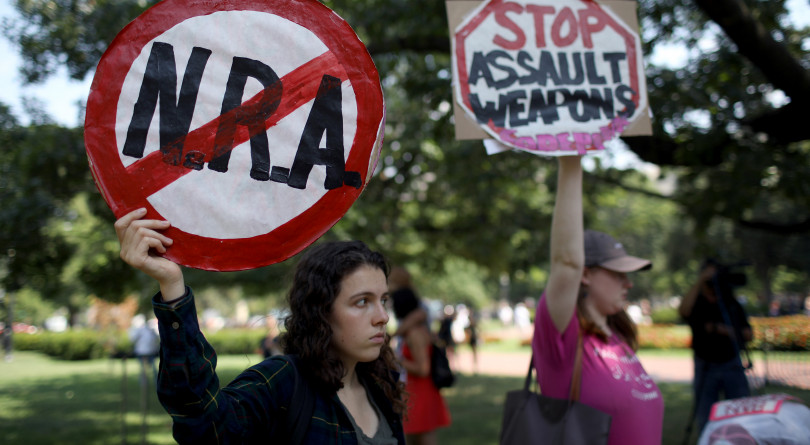 Activists gather across from the White House during a gun reform legislation rally on Aug. 6, 2019 in Washington, DC (Win McNamee/Getty Images)

The Adventure of the Silver Blaze is a relatively obscure Sherlock Holmes story that nonetheless contains one of the fictional detective’s greatest lines. An unimaginative Scotland Yard inspector asked Holmes if he had noticed any clues that might help solve the case at hand. Holmes directed him to the consider “…the curious incident of the dog in the night-time.”

The policeman checked his notes and replied, “The dog did nothing in the night-time.”

Holmes responded, “That was the curious incident!”

This exchange came to mind today as I worked at my desk. There is a flat screen TV on the wall of my office; it is tuned to the news. And as the broadcast drifts past me throughout the day, I cannot escape the conclusion that, even by the relatively low standards of the age, things are not going well for America.

Gun violence continues unabated, and with the omnipresence of smart phones, it is now live-streamed right into our hands. There’s been more than one mass shooting a day on average this year, the coverage of one interrupted by breaking news about the next. And in spite of their internal chaos, the NRA is ensuring nothing will be done to stop it.

The number of hate crimes is rising across America, for the fifth year in a row. White supremacy is marching forward, abetted by President Donald Trump’s deplorable strategy. As White House correspondent April Ryan recently noted, after Trump had maligned Baltimore and Democratic Representative Elijah Cummings, “He says he’s not a racist, but the racists think he’s a racist.

The War on Terror is grinding towards its 18th year with nothing to show for it but $6 trillion spent, 244,000 civilians dead, and a dramatically diminished role for the United States on the world stage. Meanwhile, Washington has walked away from the Intermediate-Range Nuclear Forces Treaty, Moscow has restarted weapons tests, and experts fear a new arms race has already begun.

The pace and impact of climate change appears to be exceeding the worst-case scenarios of even a few years ago. Coastal communities from Miami to Seattle are beginning to plan for a sea level rise that could displace as many as 13 million Americans. Down at Mar-a-Lago, the president still insists it’s a Chinese conspiracy.

Republican controlled state legislatures are using voter suppression and gerrymandering to rig elections. There are at least 16 different criminal investigations into the president underway. According to numerous surveys, trust in political institutions is at an all-time low. Which is no surprise when you consider children are being held in detention camps without charge, without due process and without even recording the names of their parents. The Economist Intelligence Unit no longer classifies the United States as a “full democracy”.

There is a lot to be angry about right now. But this brings us to the curious incident of the mass protests in America. As in, there are none.

At this moment, elsewhere in the world, people are on the march. Protests against political corruption are filling the streets of Moscow. In Hong Kong, the pro-democracy protests have persisted for four months, in spite of the increasingly clear threats of violence from Beijing. And in Puerto Rico, a new Governor was just sworn in after protests toppled Ricardo Rosselló. But in the United States, a land that fetishizes freedom of speech, the streets are empty.

So, where is everyone? Could it be the economy? As the President correctly points out, the United States is experiencing record low unemployment. Financial markets, while growing at a slower rate than under President Obama, continue to reach record highs. And, in spite of numerous trade wars and tariff battles, the consumer price index remains stable. Perhaps Americans have just grown too comfortable?

Or, do they lack leadership? One unique characteristic of American democracy is that the opposition party typically remains headless until their nomination race concludes a few months before the election. And, even among the Democrats who are in office, there is little unity. It’s hard to get a million people on the National Mall, demanding a Green New Deal for example, when the Speaker of the House, Nancy Pelosi, is actively opposed.

Maybe it is just too hot. July was the hottest month in recorded human history. It’s tough to be a street-fighting man and to stay hydrated at the same time.

Or, paradoxically, it could be that there are just too many things to protest. The scandals, outrages, and emergencies are coming so fast its almost impossible for concentrated anger to grow and burst out on to the streets.

I think this avalanche of crises might be the primary reason we have seen no large-scale protests since the Women’s March the day after Trump’s inauguration. In that instance, the recent election, the man, his misogyny, provided a clear and contained cause. Everyone was able to look up in the same direction, to travel to Washington, and to march in step.

But since then the President, perhaps intuitively, possibly unconsciously, has lobbed one grenade after another, several per day, sometimes several in the very same press gaggle, which has kept the public completely distracted.

Consider that in October of last year, the New York Times revealed that an 18 month investigation uncovered proof the president had committed millions of dollars in tax fraud. This was a scandal that, on its own merits, could have been the biggest in the history of the presidency. And yet, 48 hours later, no one was talking about it. Americans had moved on.

It’s not so much that this dog is doing nothing, as Holmes claimed. Rather, it is just chasing its tail, round and round, no closer to catching it than ever, and yet too busy to do anything else.