The daily humiliations of Donald Trump

Scott Gilmore: The American president faces a barrage of daily embarrassments and insults that would undo most of us. How does he do it? 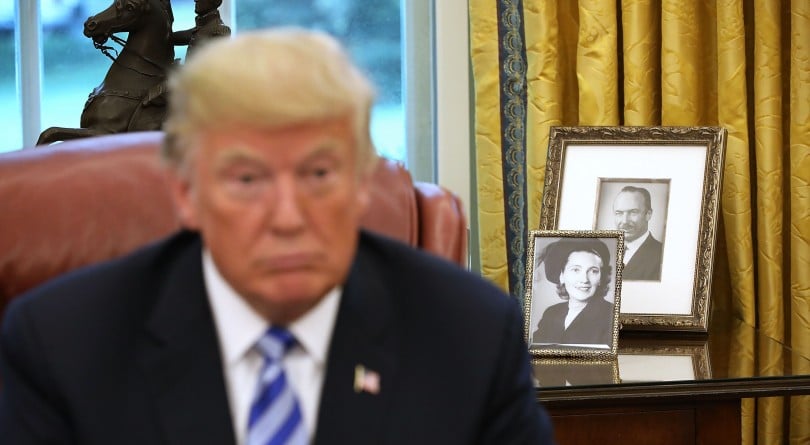 Framed photographs of U.S. President Donald Trump's parents, Fred and Mary Trump, sit on a table in the Oval Office behind the president on Aug. 28, 2018, in Washington, DC.(Chip Somodevilla/Getty Images)

Donald Trump is a Rorschach test. When people look at him most see either a great president or a destructive charlatan. He is among the most polarizing politicians of our age. But, regardless of your political views, most people see the same image of self-assurance and command.

Standing on stage at a campaign rally, he thrusts his chin upwards and basks in the ovations. Sitting at the cabinet table he holds court like a king, demanding and receiving fealty from the gathered barons. Meeting with foreign leaders he shakes their hand with the subtlety of a prizefighter. He has carefully cultivated this image of power and dignity. (There’s a reason you have never seen him laugh.)

And yet, paradoxically, Trump is forced to endure more humiliations than any president before him, he must debase himself in ways never before imagined possible, and he faces daily embarrassments that would undo most of us.

Consider Trump’s tweets from this morning. The president was reduced to personally circulating statements from his key staff claiming they had never referred to him as a fool or mocked him behind his back. I don’t care where you work or what you do, but if your boss is sending around memos that claim no one is calling him an idiot behind his back, you’ve gone well beyond the satirical world of Dunder Mifflin.

Making today’s ritual abasement even worse, the denials were necessary because of the upcoming release of the Bob Woodward book, written after hundreds of hours of taped interviews with White House officials, who have labeled the Trump administration “crazy town”. Details have been running in newspapers around the world, and if even half of the stories are true (and Woodward’s reputation for diligence suggests they are) they make Trump look like the most incompetent and foolish president in modern history.

READ MORE: Will it even matter if Donald Trump is impeached?

And just a few hours after that, the New York Times ran an anonymous opinion essay by a senior member of Trump’s administration that declared the president amoral, anti-democratic, impetuous, petty and ineffective. Keep in mind that in the past, when a White House chief of staff resigned after only one year, it was seen as a major embarrassment to the president and an indication he was not running a well-oiled machine. A scenario where the president’s own staff insult his competence and intelligence in a national newspaper was not even imaginable.

Just a few days ago, all of America’s most respected statesmen and politicians gathered in Washington to attend the funeral of Senator John McCain. But the president was not only uninvited, the McCain family had reportedly taken the pro-active step to inform the White House Trump was unwanted. And, when two former presidents gave eulogies praising qualities such as honour, courage and principle, everyone, including his own supporters, understood this as an attack on the president. Embarrassingly, this implies that everyone acknowledges the current resident in the White House lacks all of these things.

The humiliations are relentless, they continue day after day. Long time staff turn on him and seek immunity from prosecution to do so. Affairs with strippers are publicized in every news outlet in the world. Sports teams refuse to meet with him. Foreign leaders avoid him.

During the election, people were warned to take him seriously, not literally—implying that while he may make fanciful claims, he should not be dismissed out of hand. And they were right. Donald Trump achieved what only 44 other men have done: he became President of the United States.

But now, two years after his inauguration, Trump and his team are embarrassed every day by new scandals, revelations, missteps and betrayals. Almost no one is still taking him seriously, not even erstwhile allies in congress. Donald Trump is often accused of having no shame. Surely, this has to be true—how else could you explain his almost superhuman ability to endure all of these humiliations again and again and again?