The sadness that can lurk beneath the holiday cheer

Opinion: There remains a reluctance to seek support for loneliness—and that can have real consequences 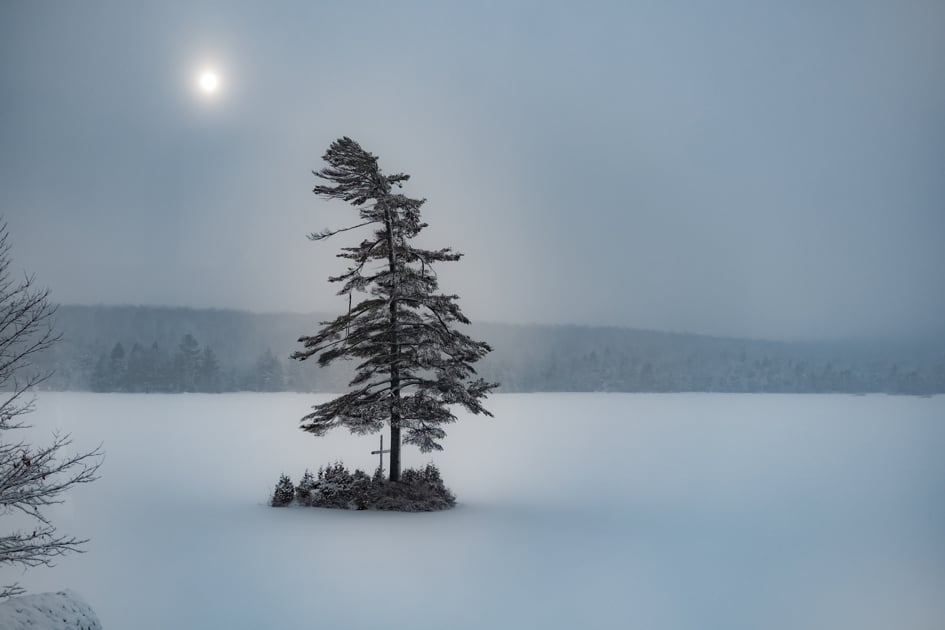 A sunny winter day on Lac Brompton turned into a beautiful battle between sun, snow and wind as strong gust of wind lifted the powder off the lake and created this ghostly image of a tree reaching for its source of life. (Photograph by Alexander Kravec)

“Lonely people have a natural affinity for the internet,” wrote the late film critic Roger Ebert in a 2010 entry on his online journal. “It’s always there waiting, patient, flexible, suitable for every mood. But there are times when the net reminds me of the definition of a bore by Meyer the hairy economist, best friend of Travis McGee: ‘You know what a bore is, Travis. Someone who deprives you of solitude without providing you with companionship.’

“What do lonely people desire? Companionship. Love. Recognition. Entertainment. Camaraderie. Distraction. Encouragement. Change. Feedback … what all lonely people share is a desire not to be—or at least not to feel—alone.”

Embedded in the post was a poignant cartoon of a simple figure, looking downward with a pink heart on its chest, showered by an unforgiving rain from a cloud hovering above. Beside this image, there were these words: “Sometimes I take a carton of eggs out of the fridge and look at it and think that maybe one day I’ll crack an egg and a little baby chicken will fall out, and I’ll wash him off and raise him indoors and then… then I’ll have a friend.”

For many, the winter brings an increasing darkness beyond the shortened daylight—a shadow which stubbornly hovers like the cloud haunting the figure in the cartoon—a cycle best captured by an Icelandic term: “Skammdegisskuggar.” The meaning, as noted by author Robert Macfarlane, is “literally, ‘shadows of the short days’; metaphorically, the darkness that can be cast into both land and spirit by deep winter.”

Winter depression, and the loneliness it invites, can make the year’s final months seem, at times, unbearable. The holidays can prove to be a particular challenge, as the reluctance on one end to reach out for support, combined with uncertainty on the other of when and how to extend a hand amid overwhelming cheer, intensifies the aching sort of isolation, which then begets further loneliness.

Why, with all the campaigns dedicated to understanding mental illness and promoting emotional well-being, does there remain a reluctance to seek support for social isolation? Loneliness hasn’t been granted the same sort of legitimacy as, say, depression. It’s largely subjective, deeply personal, and remains so stigmatized, people are deeply reluctant to discuss—or even admit to—this honest emotion. There’s a profound vulnerability in doing so, as if loneliness itself indicates or reveals some fundamental failing or flaw of character.

Some won’t acknowledge their own lingering sadness because they imagine loneliness only affects those who are, quite literally, all alone. But the fact is, you can be married, have children, enjoy a stable, successful career, be surrounded by like-minded colleagues, and still, at the end of the day, feel lonely. You can still lie awake with an emptiness, yearning for some specific, meaningful connection to something or someone that would satisfy some persistent void.

“Human connection lies at the heart of human well-being,” wrote Dr. Dhruv Khullar in his December 2016 column in the New York Times outlining the “dire physical, mental and emotional consequences” of social isolation. Though we’re more connected online than ever, those ties are increasingly superficial. Not only have deep, meaningful bonds become scarce for many, modern demands of life and work have made it more difficult to maintain and nurture—or at least, far too easy to neglect—those important few that are still held.

Whether you’re married, single, an extrovert or generally shy, close, meaningful friendships matter. It’s not the number of connections or the proximity, but the quality of them.

MORE: Put down your phone and make time for relationships

Despite the evolutionary role of interdependence for well-being and survival, rugged individualism is too often romanticized. As recent research on the medical, as opposed to the psychological, fallout of loneliness has shown, the biological and physiological consequences of the prolonged stress from loneliness can be, quite literally, lethal.

According to Khullar, “analysis that pooled data from 70 studies and 3.4 million people found that socially isolated individuals had a 30 per cent higher risk of dying in the next seven years, and that this effect was largest in middle age. Loneliness can accelerate cognitive decline in older adults, and isolated individuals are twice as likely to die prematurely as those with more robust social interactions.”

“It’s up to all of us,” concludes Khullar, “to maintain bonds where they’re fading, and create ones where they haven’t existed.”

If you find yourself, to use Ebert’s words, among “the lonely people” as the year draws to a close, it’s important to understand that, no matter the reason, you’re not alone in that feeling. If you reach out to someone—whether a close friend or a mere acquaintance; a family member or a crisis line—you’ll be met with far more empathy and understanding than you might expect, because everyone, at some point, to some extent, has been there too.

Rekindle ties with those you value and with whom you may have fallen out of touch. Write a letter or an email, or give them a call. Do something tangible, even if it feels forced at first, to begin to reconnect and rebuild the relationships which remain, in some way, important to you.

If you’re someone who will be surrounded by family and friends over the holidays, consider taking a moment, or finding meaningful time, for a person you suspect might not be as fortunate. It could be an elderly neighbour who lives alone, or perhaps a colleague you’ve noticed withdraw in recent months. You never know when the simple act of checking in—sending a simple text or e-mail, calling to chat, leaving a message, or dropping by—will change, or even save, a life.

Helping others through a difficult stretch doesn’t require special training or knowledge, just a moment of patience and an empathetic ear.

Never underestimate the value of time. Whether seeking it from another, or offering some of your own, it can prove to be the most cherished gift exchanged through the holidays. These connections have a way of growing into deep, lasting friendships—the kind that are the ultimate antidote to loneliness, even after the winter low has lifted.