Andrew MacDougall: The PM called for political diversity. It would help if he could point to one instance where he’s taken his own advice. 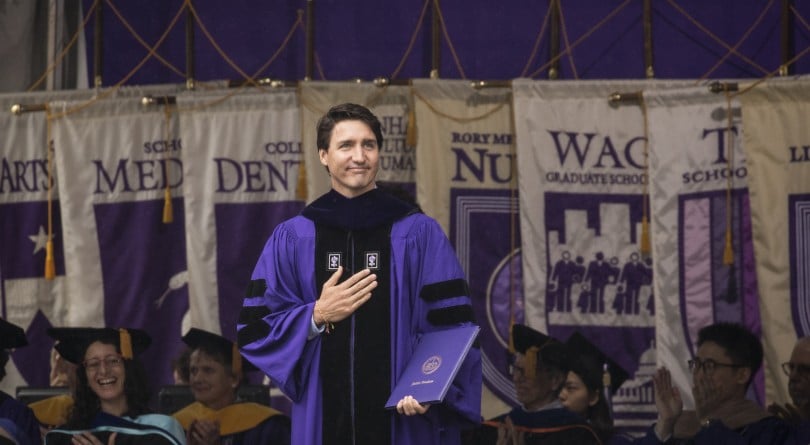 On this week’s trip to New York City, home to the neon lights of Broadway, Justin Trudeau delivered another masterclass in being Justin Trudeau.

There was the big stage—Yankee Stadium. The adoring audience—this year’s graduating class at New York University. And the comically safe message billed as brave truth-telling in dangerous times—“yep, still not Donald Trump.”

By now, Trudeau’s tropes are as familiar as they are trite. Not that his rent-a-charges minded. “Diversity doesn’t have to be a weakness, it can be our greatest strength,” the Prime Minister cooed. And a thousand Instagram stories bloomed.

Chuffed by the boffo reaction to one bromide, Trudeau offered another: “The leadership we need most today, and in the years to come, is leadership that brings people together.” While less charitable types might conclude this statement has the depth of a finger bowl, they weren’t present in the House That Ruth Built. To the whooping graduates, Trudeau is Marianas Trench.

To give Trudeau his due, it wasn’t all Hallmark talk. The prime minister did at least try to earn his honourary diploma by teaching a little Canadian history, offering up Wilfrid Laurier as a salve to heal America’s tribal wounds.

“[Laurier],” the prime minister preached, “saw that it’s actually harder to seek compromise, to dig deep into yourself, your ideas and convictions, honestly and rigorously, to see where you can give and where you do need to stand, while opening yourself up to the other point of view, to seek out and find that common ground.” Amen, brother Trudeau.

This is usually the point in the dissertation where the savvy speechwriter tucks in a personal example to bring an abstract concept to life, but any graduates hoping to hear of a time when Laurier’s dictum was put into practice went home empty handed.

Instead, Trudeau stuck with preacher mode: “To let yourself be vulnerable to another point of view—that’s what takes true courage. To open yourself to another’s convictions, and risk being convinced, a little, or a lot, of the validity of their perspective.”

An evil floor director would have at this point called for a jump cut to Liberal MP Scott Simms, he who was recently stripped of a commons committee chairmanship (sorry, chairpersonship) by Trudeau for agreeing with Conservatives that religious groups shouldn’t have to get behind abortion to receive summer jobs funding from their government.

Undeterred by the Newfoundlander pinned under his wheel, Trudeau drove on. “Now, don’t get me wrong: there are places in this world where a little more tolerance would go a long way,” Trudeau said, but whether the prime minister was referring to Gaza, Congress or the PMO, he wouldn’t say. Perhaps inspired by his setting, Trudeau then swung for the fences: “But if we’re being honest right here, right now, I think we can aim a little higher than mere tolerance.”  That’s right future leaders of tomorrow, better is always possible™.

“Think about it,” Trudeau then thought aloud from somewhere near second base. “Saying ‘I tolerate you’ actually means something like, ‘Ok, I grudgingly admit that you have a right to exist, just don’t get in my face about it, and oh, don’t date my sister.’” When reached for comment from his political exile in Germany, former Trudeau foreign affairs minister Stephane Dion declined, except to say that he didn’t know that Trudeau even had a sister.

Reading the full text of the prime minister’s address, it’s clear he values every strain of diversity except the one that’s actually needed to pull us through our current political malaise: intellectual diversity. In these days of “safe” spaces and trigger warnings, fewer students are being exposed to, let alone challenged by, ideas with which they don’t already agree.

To be fair, Trudeau did include some words on diversity of the mind. “Diversity includes political and cultural diversity,” Trudeau said. “It’s far too easy, with social media shaping our interactions, to engage only with people with whom we already agree.” I couldn’t agree more, but it would help if Trudeau could at least point to one instance where he’s taken his own advice. Perhaps it’s because there isn’t one. If Justin Trudeau had a coat of arms, it would include a bargepole. Just ask the people who believe in electoral reform or his (former) senate caucus. Who is Trudeau even kidding? He is the Liberal son of a Liberal prime minister who hasn’t spent a single day away from his tribe.

For Trudeau, diversity is taking a year off and having a laugh touring the world, dabbling in other people’s cultures and dressing up in their costumes. It’s about genuflection to liberal pieties, not honest-to-God intellectual introspection.

As Trudeau proceeded to the peroration, he finally made his ask: “As you go forward from this place, I would like you to make a point of reaching out to people whose beliefs and values differ from your own. I would like you to listen, truly listen, and try to understand them.”

What Trudeau didn’t add was a call to watch Fox News, or listen to Infowars, or read the Daily Caller, or any of the other outlets the NYU students have never gone anywhere near that are shaping Donald Trump’s thoughts on the world.

“We are not going to arrive at mutual respect, which is where we solve common problems, if we cocoon ourselves in an ideological, social or intellectual bubble,” Trudeau added.

Damn right, Prime Minister. How about stepping out of yours?