Opinion: The federal government says delays to the Trans Mountain pipeline were costing Canada $15 billion a year. But that may not be quite right. 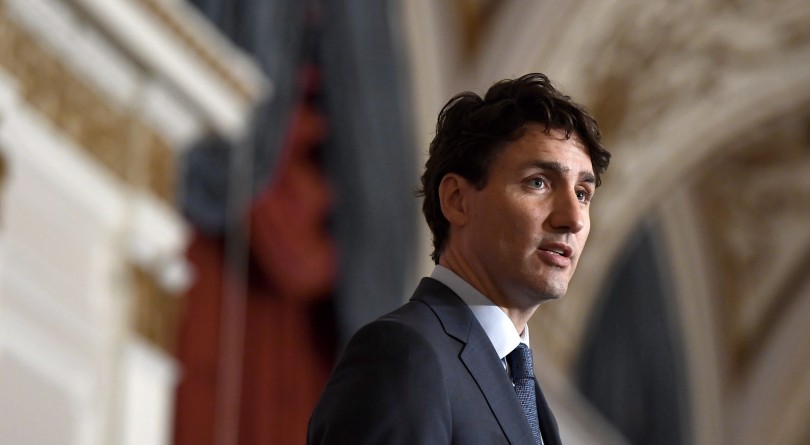 Prime Minister Justin Trudeau speaks at the Civil Society 7 meeting in Ottawa on Monday, May 28, 2018. THE CANADIAN PRESS/Justin Tang

David Hughes is an earth scientist and author of Canada’s Energy Outlook: Current Realities and Implications for a Carbon-Constrained Future, which was co-published by the Canadian Centre for Policy Alternatives, Corporate Mapping Project and Parkland Institute.

The purchase of Kinder Morgan’s Trans Mountain expansion project is in the “national interest,” says the Trudeau government. It will create thousands of jobs, and delays in the project are costing Canada $15 billion per year, they say. The total cost for the federal government includes $4.5 billion for existing Trans Mountain assets, plus a notional $7.4 billion for construction of the expansion.

That all sounds good—except that the argument about jobs has already been thoroughly debunked. Most of the jobs created would be for the construction of the pipeline and end with completion in late 2019 or 2020. Permanent jobs upon completion of construction would tally 40 in Alberta and 50 in B.C., according to Kinder Morgan’s application to the National Energy Board (NEB).

And the claim that delays in the pipeline are costing Canada $15 billion per year—a favourite talking point of Rachel Notley and Justin Trudeau’s governments to justify the project, and one that has been widely cited in the media—bears closer examination, too.

A little digging reveals this number came from a Scotiabank report published on Feb. 20. The report states: “If maintained at current levels, the discount on Western Canadian oil [due to delays in pipeline approvals] would shave C$15.6 billion in revenue annually from the sector.”

Here’s how they got that number: At the time this report was published, the discount between Western Canadian Select (WCS)—the Canadian heavy oil benchmark priced at Hardisty, Alta.—and West Texas Intermediate (WTI), which is priced at Cushing, Okla., was US$32.10 per barrel, which works out to the $15.6 billion number, if projected out for the year. Scotiabank correctly pointed out that the discount between WCS and WTI is normally about US$13.

But it was an outage on the Keystone export pipeline due to a spill in South Dakota in November 2017 that caused a 20-per-cent reduction in capacity, and caused that spike in the discount. And the discount normally already includes an $8-per-barrel quality discount due to the higher cost of refining WCS heavy oil, as well as a $5-per-barrel transportation cost from Hardisty to Cushing, totalling $13.

Scotiabank also pointed out there will be a deficit of pipeline capacity until one of the three currently approved pipelines is completed, a date that is now slated to be, at the earliest, late 2019 or 2020. Any one of Keystone XL, Line 3 or TMX would serve the purpose of erasing the deficit, the report said—and Keystone XL and Line 3 look like they’ll be built, after all.

Digging deeper in the Scotiabank report reveals they expected the discount to be lower through 2018, averaging $21.60 per barrel. And with more rail transport, as is highly likely, they expected the discount to average $18 per barrel—meaning that with these added expectations, that number comes down from $15.6 billion per year to $6.7 billion per year.

Looking still deeper, we see that the discount on May 18 was actually $13 per barrel—exactly the long-term average—which means the discount that day was costing the oil sector in Canada precisely nothing extra. The spike in the discount was temporary and caused by exceptional circumstances. With two other approved pipelines likely to be built in the same timeframe, Trans Mountain delays are not costing Canadians anything. The federal and Alberta governments’ insistence that delays to Trans Mountain specifically are costing Canada $15 billion per year is bogus.

In light of the much-needed larger conversation on Canada’s energy future and commitments to reduce emissions, false claims of grievous financial damages over the impasse on Trans Mountain are a distraction.

B.C.’s environmental concerns are real and the justifications for purchasing Trans Mountain are flimsy indeed. Yes, both the Notley and Trudeau governments are facing elections next year, but pushing through this purchase based on a false premise in order to save face and preserve political capital is a disservice to the long-term interests of Canada.

Canada needs an energy plan based on more than politically motivated rhetoric. Meeting future energy security needs and climate commitments, given current projections in the absence of political leadership, will otherwise be virtually impossible.