The federal government gets Trans Mountain—and B.C. gets a new, tougher foe

Opinion: The B.C. government had hoped to kill Trans Mountain by waiting Kinder Morgan out. That plan backfired. Still, there are X-factors that could help John Horgan 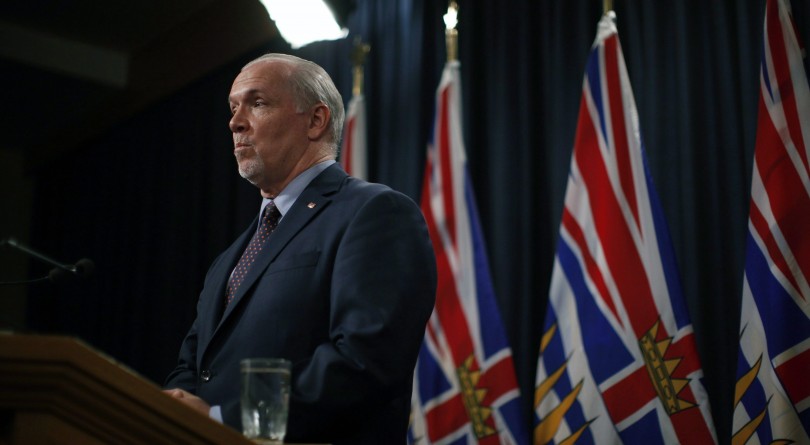 Premier John Horgan provides an update following the decision from the federal government's plan to buy the Trans Mountain Pipeline from Kinder Morgan during an a press conference in the press theatre at Legislature in Victoria, B.C., on Tuesday May 29, 2018. THE CANADIAN PRESS/Chad Hipolito

Waking up to the news that the federal government had purchased the Trans Mountain pipeline for $4.5 billion on May 29 was a shock. It was like Dr. Ian Malcolm, hero of Jurassic Park, peering out of a jeep at re-engineered dinosaurs: “You did it. You crazy son of a bitch, you did it.”

Speculation about what Ottawa would do to save the embattled project and protect its corporate progenitor has been rampant for weeks, especially as it became increasingly clear that Kinder Morgan wanted out. Now, as of August, Canadians will be the owners of a pipeline—or at least until the government can sell it back to a private owner.

The New Democratic government of British Columbia has opposed the project since it formed in the spring of 2017 and B.C. premier John Horgan has doubled down on his opposition to the pipeline, citing environmental concerns. Of course, his minority control of the legislature depends upon support from the province’s Green Party, which also wants to see the Trans Mountain expansion scuttled. In the governing agreement between the parties, the two promised to “immediately employ every tool available to the new government to stop the expansion of the Kinder Morgan pipeline, the seven-fold increase in tanker traffic on our coast, and the transportation of raw bitumen through our province.” So, there you have it.

The NDP playbook was to use court cases and permit delays to either stop the project through a ruling or wait out Kinder Morgan while investors got cold feet. That seemed like a smart approach. But with the announcement of the federal government’s pipeline purchase, B.C.’s plan has boomeranged on them, returning to hit them square in the face. Now, B.C. faces a tougher opponent with deeper pockets, greater legal resources, and a lot more to lose than a Texas oil company.

Kinder Morgan had investors and earnings calls and a stock price to watch as well as limited funds and tight timelines. The federal government isn’t saddled with those issues, though there are some rough parallels. Canadians are now the investors; project updates and news reports will be the earnings call; polls will be the stock price; and on the issue of funds, well, even governments in Canada can reach a spending point that causes citizens to flinch. But the Liberal government has cash, jurisdictional sovereignty (probably), limited Crown immunity, buildings full of lawyers, and the benefit of a majority of its population who support the project. That helps.

Prime Minister Justin Trudeau has repeatedly said that the pipeline will get built, and now it’s entirely on him to get the job done. Kinder Morgan investors got squeamish when the going got tough on the project, but the federal government, led by a Liberal Party whose electoral future may now depend upon Trans Mountain’s success, has no choice but to ride this thing all the way down. They own the pipeline issue now—literally and figuratively. Whether the expansion means a smooth landing in the 2019 election for the Red team or something closer to Major Kong riding the bomb is more than ever in their hands, so they’ll be particularly motivated to get this thing built.

Before the purchase, there were two X-factors that could have helped level the playing field somewhat in favour of B.C.’s efforts to scupper the pipeline: the courts and the streets. The former was the greatest risk to the project, as court delays threatened to spook investors, but now that the government is preparing to purchase the pipeline, the courts don’t seem to be much of a threat. The B.C. government’s jurisdictional reference case will be a slam-dunk win for the federal government, and First Nations’ challenges to the National Energy Board’s approval process tilts in the federal government’s favour.

The second X-factor, however, is and remains a much more serious threat to the project. Law and justice, after all aren’t the same thing: Laws can be unjust, as can legal processes, such as the NEB process. Governments decide the law, but the people get to adjudicate what is just and what isn’t. Protesters—including environmentalists, Indigenous peoples, and regular ol’ concerned citizens who see the matter as an existential threat to the planet and an insult to Indigenous rights and reconciliation—are primed to resist the project through civil disobedience and perhaps more extreme measures.

Canada has seen resistance to projects before, especially during the 1990s, which bore witness to both the Clayoquot protests over logging in the rainforest (in which over 850 people were arrested) and the Oka Crisis, a standoff over land in Quebec in which a Mohawk elder and a police officer were killed. The pipeline expansion resistance could be exponentially more serious, especially set against a backdrop of growing concern over climate change, Indigenous moral authority, and growing settler recognition of Indigenous rights.

What will the government do in or around an election year if things get nasty? How far is the government willing to go to build this thing, and for how long? Somewhere these questions are being discussed by officials, and the public should start thinking about this, too. It had better be a very serious discussion, with serious concessions now, instead of a literal battle later.

With the purchase, B.C. has traded a face-off with a private company for a serious test of the federation and its institutions. The federal government’s pipeline acquisition will make opposition to the project more difficult in British Columbia, further straining the relationship between Ottawa and Victoria, not to mention between Victoria and Edmonton. But that’s just the beginning. The federal government will find an equally formidable opponent in those prepared to resist the expansion at any cost—and when the law and divergent conceptions of justice conflict, all bets are off.