The first leaders debate: The battle for small advantages

Stephen Maher: Trudeau and O'Toole—two leaders fighting for their political careers—stood out in a debate that may have been short on substance but not drama 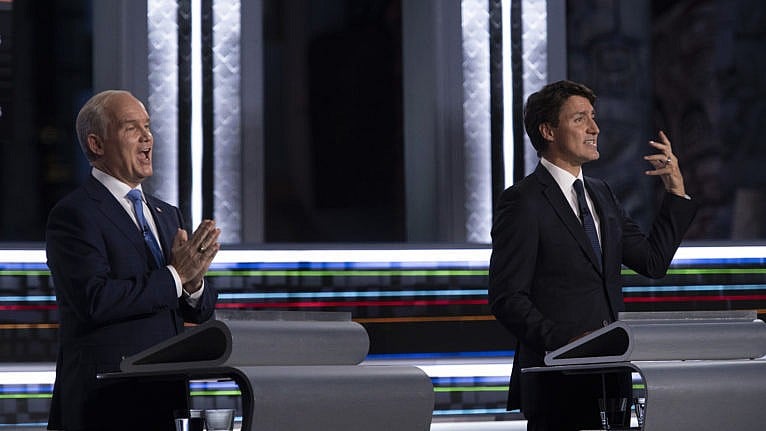 Trudeau and O'Toole during the French-language leaders debate, on Sept. 8, 2021 in Gatineau, Que. (/Justin Tang/CP)

The French language debate Wednesday night seemed to signal that we will be in a war of attrition for the next 12 days, a fierce battle for small advantages in an election that will be decided by small advantages.

According to a big poll by Leger, arguably the best Canadian pollster, in the days leading up to the debate the Conservatives and Liberals were tied.

Justin Trudeau, a talented performer when he has fire in his belly, has managed to claw himself back into contention after Erin O’Toole, a moderate, reasonable man with a lot of reasonable-sounding plans, looked to be running away with the race. But the Conservative freight train seemed to lose steam this week, after a TVA debate in which O’Toole tried to not to explain his position on an assault gun ban, which sentenced him to days of stories where he tried not to clarify his position, then clarified it, then changed it. The daily grind of gun headlines seems to have worn away at his support, which is natural enough when you consider that a lot of it was new, from people who only a few weeks ago had been planning to vote for the Liberals.

After he overtook Trudeau so early in the campaign, it was natural for the media to subject his plans to greater scrutiny, and natural for Trudeau to attack him, and it appears to have worked, so that now the two parties are close.

O’Toole’s French is workmanlike, a lot better than it was, but he is not at ease as Trudeau is, and he failed to connect emotionally on Wednesday night, although who knows? For francophones who don’t know him before the campaign, he at least had an opportunity to introduce himself.

Trudeau, on the other hand, was intense, talking fast and urgently, defending his government with confidence and passion, effectively enough that I found myself forgetting at times that we are going through an unnecessary election because of him.

He seemed to score blood twice—once from O’Toole and once from Yves-François Blanchet.

O’Toole has created some fiscal room in his platform by promising to cancel the Liberals’ child-care deals with the provinces, which would mean taking $6 billion from Quebec, which will displease them. This policy was an election-winning strategy for Stephen Harper in 2006, and ought to appeal to families with a stay-at-home parent, but O’Toole, in the French language debate with the biggest audience, was under attack for taking money from Quebec, which seems unlikely to help him.

Late in the debate, Trudeau turned on Blanchet, in what looked to be a rehearsed bit of theatre, accusing the Bloc leader of questioning his status as a Quebecer: “I’ve always been a Quebecer, I’ll always be a Quebecer,” he stormed, while Blanchet told him to relax.

I have no idea how this will play with the francophone voters who both Blanchet and Trudeau are courting, but Trudeau tweeted the exchange right after the debate, and he was cheered on by supporters online, so he seemed to think he had connected, and there is no doubt that he showed fire, which might help pump up his own supporters, who have to be feeling down in the dumps about how this whole election thing is going.

None of the other leaders seemed to stand out or connect in a meaningful way in the course of the night, although Blanchet’s charms are often lost on me, so I won’t be surprised to learn that I missed something from him that francophone Quebecers liked.

The polls have not shown any huge swings in Quebec since the beginning of the campaign. The NDP and the Tories are both up a bit. Trudeau was likely trying to polarize the contest between the Liberals and the Bloc with his intense attack on Blanchet, squeezing out the Tories in time-honoured late-campaign Liberal fashion. We will have to wait to see if that works.

This means the big show will be the English debate on Thursday night, in which O’Toole gets one shot, in his own mother tongue, to make his pitch to Canadians, and score some points on Trudeau.

Both men are fighting for their political careers, and both of them have considerable skills, so there is no reason for either of them to save ammo for later. It will likely be intense, and may help voters choose between these two leaders.

This election, though unnecessary, is turning out to be much better than the last one, in which an uncommunicative Andrew Scheer was unable to explain himself to voters adequately after Trudeau had been revealed to have worn blackface on several occasions, and Jagmeet Singh, although he was an appealing presence, underperformed. Everyone seemed to have done worse than expected, and voters had to end up feeling like they were making the best of a bad situation when they marked their ballots.

This time, so far nothing horrible has been revealed about the Prime Minister and the opposition has presented a more palatable alternative to him, which is good news for the voters, who only have to pay attention for another dozen days.