The foul cynicism of Christy Clark’s speech from the throne

Why the doomed B.C. Liberals' Throne Speech—gruesomely stitched together from the platforms of the party's rivals—was insidious and dangerous 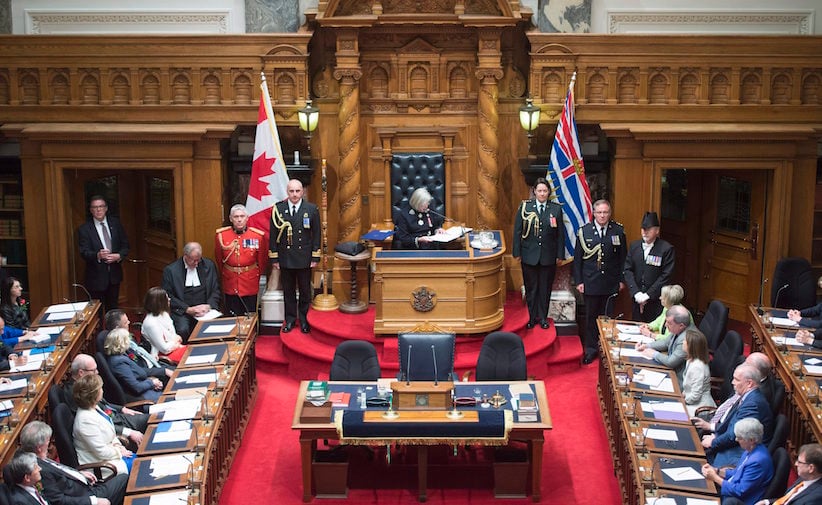 There’s an old joke, often attributed to Groucho Marx, that I spent the better part of a day thinking about after British Columbia’s premier, Christy Clark, presented her doomed government’s speech from the throne. The comedian is said to have quipped: “These are my principles. And if you don’t like them, I have others.” To be honest, I’d be laughing more if the line wasn’t so useful as an explanatory tool for understanding politics in the province right now.

In Clark’s speech, read by B.C.’s Lieutenant Governor Judith Guichon, the premier made 30 pledges that were absent from her Liberal Party’s platform of just weeks ago, including more than a dozen lifted from the platforms of the likely-to-govern-soon New Democrats and their Green Party backers. After opposing proposals (presumably as recently as a week ago) such as a referendum on electoral reform, a ban on corporate and union donations to political parties, increases in funding for daycare, social assistance, and disability, scrapping the requirement for a referendum on new transit funding sources, and getting rid of tolls on the Port Mann Bridge, Clark and her Liberals hastily came to embrace them—and others, too.

Friends, I think I’m starting to become rather cynical towards politics.

READ MORE: How the B.C. Liberals squandered their chance to keep power

I seem naive, don’t I? How is this any more cynical than politics-as-usual in late-modern liberal democracies? Perhaps Clark’s speech is no different in type when compared to other political ploys, but it’s certainly more extreme in degree. Honestly: The premier lost an election just weeks ago. Her party has been in power for 16 years. She has been premier for six years. And staring down defeat, what does she do? The premier appears to desperately cling to power in selling out her party and its supporters in offering a de facto “renewed” policy platform that stands in stark contrast to the last several years of the B.C. Liberal government and the still-warm corpse of the party’s election platform. And she “borrows” policies from the parties poised to defeat her days from now, abandons years of party commitments, and spins her reversal as “listening to voters,” as if she’d just now discovered the practice of consulting the electorate whom she is meant to serve. And all this after declaring that NDP leader John Horgan is a flip-flopper who isn’t to be trusted and labeling him “Say Anything John.”

No, Clark’s volte-face has nothing to do with “listening”—instead, it looks to be the most cynical ploy to maintain (or soon regain) power that I’ve seen in modern-day politics in Canada. I mean, who knew that when you mix orange and green you’d get B.C. Liberal blue?

The Liberals have spun their remarkable about-face as “listening to the voters.” I call shenanigans. The party received about 40 per cent of the popular vote in the 2017 election—down about 4 per cent from their 2013 result—and dropped from 49 seats to 43, making Clark’s dramatic conversion to an NDP/Green-light version of her party appear like an overcorrection, given the modest shift in support. These numbers also raise the question: just who is the party listening to? Were they not listening to them in 2013? Or are they listening to different voters now? Which ones? Perhaps voters in swing ridings? Or in presumably safe ridings where they lost by a slim margin? I suppose what the premier means is that she’s listening to some new voters, if those folks happen to live where it counts.

RELATED: How the B.C. Speaker should manage a messy House

Cynicism aside: will the gambit work for Clark? I don’t think so. It’s unlikely that any New Democrat or Green member of the Legislative Assembly (MLA) will break ranks and support the premier. Why would they? Once the Liberal government falls, they’ll get their shot at governing, short-lived as it may be; even if an NDP MLA were tempted to trade their shot at governing for a more stable legislature and some of their policies, their supporters wouldn’t soon forget the betrayal. And for the Greens, they’ve just made a deal to support the NDP, so it would be tricky from them to try to wiggle their way out of it so soon. On top of it all, of course, who can trust Clark and her Liberals now? No: the NDP and the Greens will, as expected, soon defeat the Clark government on a confidence motion and John Horgan will become premier of British Columbia.

Nonetheless, the Throne Speech does put the two opposition parties in the rather awkward position of having to vote against their own ideas. Yes, NDP leader John Horgan and Green Party leader Andrew Weaver must instruct their caucuses to defeat their own agenda—for the moment—so that it can be reborn and pursued under the aegis of the NDP-Green supply and confidence agreement. It’s a moment worthy of Sophocles. If Sophocles were a total hack.

As shrewd as this move may seem to Clark, who will surely use the “Nay” votes of NDP and Green MLAs as fodder for her election argument—“See, I tried to work with these guys! I even copied their platforms!”—the Premier may end up hoisted with her own petard. What happens when the NDP and Greens re-introduce these policies in the months to come (after all, the policies are their ideas) and Clark as Leader of the Opposition is faced with a choice to either support the government or vote against pledges she’s just recently made in her own Throne Speech? Perhaps she’ll be able to find some minor concerns to use as a pretext to oppose the NDP-Green iteration of the policy, but by then we’ll be way, way down the rabbit hole.

READ MORE: What the B.C. NDP-Green deal means for rest of Canada

Whatever happens in the days, weeks, and months to come, though, one of the most insidious threats embedded in Clark’s cynical Throne Speech is a deeply disturbing conception of politics. Premier Clark has, in effect, tried to reduce politics to mere management and power; by raiding the NDP and Green platforms with abandon, by taking policy ideas that happen to be popular now, and by arguing that she is just borrowing the best bits from each party, she has indicated that deep and persistent ideological differences, which are reflective of real differences that one should expect and even celebrate in a pluralist democracy, are trivial concerns when power is at stake. Clark has stitched together a Frankenstein’s monster she claims she’s best suited to command. What could possibly go wrong? After all, everything turns out okay in Frankenstein, right?

The Premier’s vision of politics presented in the Throne Speech is post-political; she’s imagining a world where parties are mere brokers of the public will of the moment, interchangeable except for their respective management expertise, and the only questions relevant to politics is how to gain and keep power, alongside some technical questions about how to implement whichever policies happen to be fashionable. Clark’s approach to politics is dangerous, not only because it’s hopelessly cynical, but also because it’s disrespectful to voters who rely on parties as aggregators of ideas that lead to policies they like. Reducing politics to mere whims of the moment, technocratic management concerns, and Machiavellian power struggles undermines productive partisanship as helpful touchstones for voters while also pretending that there aren’t real and persistent disagreements in our society that cannot be reduced to technical questions of “how” and “by whom,” rather than “what” or “why.”

British Columbians will survive this frustrating and embarrassing chapter in the history of our politics. Citizens are not fools, and our system of government remains, as ever, plenty sound—if not quite as inclusive as it might be. Indeed, I believe Clark’s cynical gambit will fail, and we’ll all move on.

And yet, we shouldn’t forget what happened with this speech from the throne. In the future, leaders ought to hold it up as an example of what we should all strive to avoid in civic life. If we can do that, perhaps some good will come from this sad mess.