The games Liberals are playing with Jagmeet Singh

Tom Parkin: It goes beyond the discourteous delays in calling a byelection, and seems to point to even more petty efforts to undermine the NDP leader 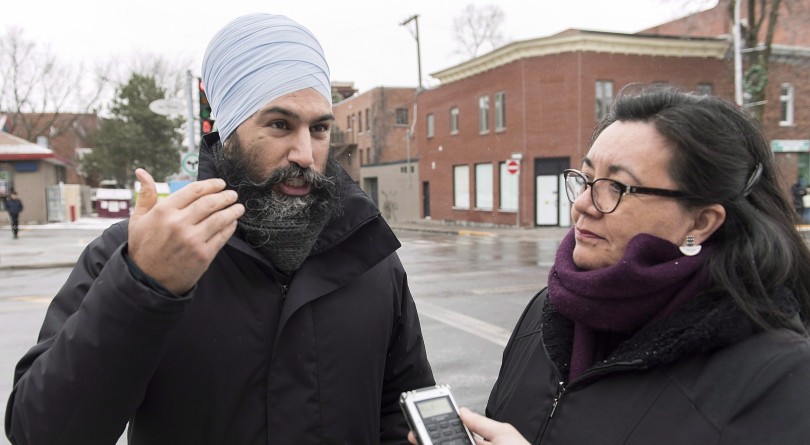 NDP Leader Jagmeet Singh and NDP candidate for the riding of Outremont Julia Sanchez speak to reporters during a tour of the Montreal borough on Dec. 22, 2018. (THE CANADIAN PRESS/Graham Hughes)

Not paradoxically, a year in which the Trudeau Liberals spent precious little effort fixing the affordability of Canadian’s everyday life was also a year they invested considerable energy into messing with NDP leader Jagmeet Singh’s effort to win a Commons seat.

And it goes deeper than just the long-running discourteous delay game.

In early August, Singh—who has been focusing his concern on the high cost of housing and prescription medicines—declared his run in Burnaby South. The seat became vacant on Sept. 14, 2018. But it was skipped over on Oct. 28, the day Trudeau called a byelection for Leeds-Grenville-Thousand Islands and Rideau Lakes. That byelection was held over a month ago.

On Dec. 29, local Liberals finally nominated a Burnaby South candidate, signalling a call might come on Jan. 6 for a Feb. 11 vote. But now that date has also come and gone.

Trudeau’s delay game has blocked Singh from directly asking the Prime Minister about the cost of everyday life until well after the Commons returns on Jan. 28—perhaps even until after the budget is presented, usually near the end of February. Trudeau has played a cheap and petty game far beneath standards of acceptability.

But the discourteous delay game hasn’t been the only one played on the NDP Leader. In November, it appears Liberal operatives tried to nudge Singh toward switching his byelection run to a seat the Liberals knew wasn’t vacant.

That opportunity arose amid the Raj Grewal affair. Grewal, then a Liberal MP, made headlines in late November over reports that he’d gambled millions of dollars and for several months had been subject of an RCMP investigation over the source of his funds.

Grewal’s problems put the Liberal Party leadership in a bad spot. His actions were embarrassing and tainting, and no doubt the Liberals wanted to put some daylight between themselves and Grewal. But Grewal claimed his actions were driven by a gambling addiction. Creating daylight through a caucus expulsion would inappropriately punish an MP for a health problem.

On Nov. 21, the day before Grewal’s issues were made public, the Brampton East MP met Government Whip Mark Holland. Rather than being expelled from the Liberal caucus, Grewal agreed to announce he would resign as MP. But Holland didn’t get the MP’s commitment on paper. A man in personal crisis, massively indebted and addicted to gambling was left to, on his own, send in the paperwork to cut off his own pay.

Of course no Brampton East vacancy did ever occur. On Nov. 30, Grewal revoked his pledge to resign. Sparing Trudeau the bad optics of expelling him, Grewal announced he would quit the Liberal caucus and sit as an independent MP.

But even while struggling through the Grewal affair intrepid Liberals strategists found a new opportunity to mess with Singh.

Grewal’s Brampton East seat is Singh’s home turf—and Singh would likely be a shoo-in to win a byelection there. Burnaby South is a steeper climb, the NDP having narrowly won it in 2015.

Whatever the reality of Grewal’s announcement, it was easily predictable that when it came, reporters would ask Singh if he would stick with Burnaby South or switch to Brampton East—and that inevitable questioning was an opportunity.

And a flurry of media activity from Liberal sources suggests the opportunity was taken.

In the few hours immediately before Singh was about to be hit with stick-or-switch questions, Liberals suddenly acted to close two byelection issues they had been happy to leave open for months: timing and whether Singh would face a Liberal candidate in Burnaby South.

Both were closed in a way to nudge Singh toward switching his byelection run to a seat the Liberals knew wasn’t vacant, and had no control over whether it ever would be—and in the end never was.

In a Hill Times story posted late on Nov. 21—the day of the Holland-Grewal meeting—a Liberal source reported that all remaining byelections would be called in January and held in February. That report would remove NDP strategists’ fears of further delay if Singh switched.

And in a Huffington Post story appearing just hours before Grewal’s public announcement, an unnamed Liberal source reported the PM had decided to run a Liberal candidate in Burnaby South. In September, a National Post columnist reported the PM was “mulling” the idea of extending so-called leader’s courtesy to Singh by not running a candidate, “but no decision has been taken.” Confirming a candidate in Burnaby South would make Brampton East look more enticing.

The next day Singh rejected a switch, saying he’d committed to Burnaby South and he’d see it through.

Wise choice. Had Singh declared for Brampton East, when Grewal revoked his resignation pledge, Singh would have been in the embarrassing situation of having to switch back—while Liberals shrugged their shoulders, Grewal blamed addiction and the pundit class giggled.

And it seems always being alert to new ways—even amid a crisis—to mess with Singh is better than having to respond to his Commons questions about Liberal inaction on the affordability of Canadians’ everyday life.