The Huawei deal that the Trudeau government missed

Tom Parkin: The warning signs about Huawei and the Liberals' starry-eyed approach to China were clear. This extradition mess could have been avoided. 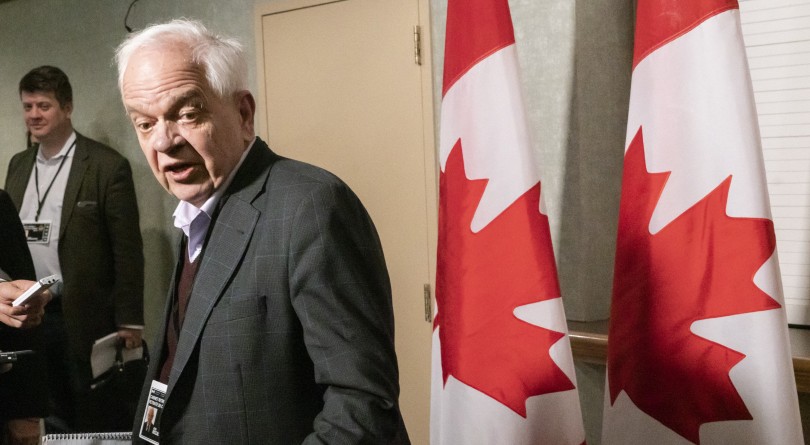 John McCallum, ambassador to China, arrives for a cabinet meeting in Sherbrooke, Que., on Wednesday, Jan. 16, 2019. (THE CANADIAN PRESS/Paul Chiasson)

There’s a deal to be made to exit this Huawei mess. But it’s not a win for Canada. And it requires the Trudeau government realigning its “rule of law talking” talking point.

But the biggest question is why Canada was exposed to any of this at all.

Yesterday, Canadians found out that Ambassador John McCallum had held an extraordinary press conference in Markham, Ont., on Tuesday. The subject was the extradition of Huawei CFO Meng Wanzhou to the United States. The least stunning part was that only Chinese-language media were invited.

It was only a few weeks ago that Global Affairs Minister Chystia Freeland was decrying U.S. President Donald Trump’s comment that Meng’s arrest could be “part of negotiations” on a new U.S.-China trade deal. Yet here was McCallum, her own ambassador, doing his own political meddling, and maybe setting up an exit.

The open question is what McCallum was signaling by telling Chinese-language media that Meng had “quite a strong case”. And be clear, it wasn’t a passing comment, it was well-considered and itemized list.

The arrest of Meng has been treated as a virtual hostage-taking by Chinese officials. And it seems to be no coincidence that two Canadians have since been detained in China. A third, convicted on drug charges in 2016, has suddenly been issued with a death sentence.

Amid this stand-off, on Tuesday McCallum was giving free legal advice to the Chinese government.

READ MORE: The lies and insults that China has pointed at Canada

There are three specific “strong arguments” Meng’s lawyers might use to get her release, he told his private media meeting. The first is the political motive displayed by Trump. Second, extraterritoriality—that is, U.S. law only applies to acts within the U.S. And third, that Canada does not mirror U.S. laws placing sanctions on those doing business with Iran.

Back in Beijing, Canada-watchers must have sat back in their chairs. Canada’s ambassador. A message especially for them. Explaining how to beat the charge. With “strong arguments” and a “strong case.” Surely it must have sounded like a broad hint that Canada wanted Meng sent home, not extradited.

Let’s rule out the rogue ambassador theory. As former CSIS Director Richard Fadden pointed out on CTV’s Power Play Wednesday, “ambassadors are well advised to clear what they say with their masters” to avoid “irritation” with the PMO or minister.

Yet later Wednesday, when Trudeau was asked about McCallum’s comments, he dodged the question and raised no concern. And Freeland— McCallum’s minister—was doing no back-peddling. Despite giving free legal advice to a country that has just snatched Canadians, McCallum today remains ambassador, with no indication of any diminution of trust.

So go back a few days. Last Wednesday, McCallum and five other Canadian ambassadors met with the cabinet in Sherbrooke, Que. Meng and the Canada-China-U.S. mess were on the agenda.

Meng is no ordinary Chinese citizen. She’s CFO of China’s largest private company with about 170,000 world-wide employees. And she’s a daughter of Huawei founder Ren Zhengfei, whose net wealth is currently $4.3 billion, according to Forbes.

And the U.S. has, for years now, been working to shut down the growth of Huawei, which manufactures personal devices, enterprise network gear and equipment for cellular and internet network carriers. U.S. security voices and politicians have been warning Canada that installing Huawei’s equipment may open deep security vulnerabilities.

“Nation-state” hacking, according to a former Nortel security executive, was a “considerable factor” in the 2009 collapse of Nortel Networks, the once-massive and mighty Canadian internet and telephony company. Those attacks came despite a partnership struck between Nortel and Huawei in 2006.

Despite the Nortel story and security concerns, Huawei continues to be more than welcome in Canada. The company has invested millions into partnerships with Canadian universities to develop new knowledge and innovations—sometimes with Canadians’ public dollars. Canadian telcos’ purchases of Huawei equipment would reportedly require about $1 billion to replace.

Huawei opened its first Canadian office in 2008. And in 2011 the company hired Scott Bradley, a lobbyist who had just been defeated as Liberal candidate in Ottawa Centre, as its government relations vice-president. Bradly stickhandled through security concerns about Huawei, but questions kept mounting.

There is a deal to be put on the table. A Canada-China exchange of hostages—a three for one trade. And, in lieu of giving Trump his Meng bargaining chip, Canada gives into U.S. and Canadian Conservative demands to ban Huawei. Sure, Canada takes a double-ended loss—relations with China burned while submitted to U.S. dictates. But Trudeau gets pictured with three returned Canadians. And it’s the song’s flourishes that are remembered, not the song.

The remaining domestic political challenge would be to make the deal consistent with rhetoric about “rule of law.” Until now, rule of law has provided cover for doing what the U.S. wants—and perhaps has conditioned Canadians to think extradition is a slam-dunk for the U.S. On Tuesday, McCallum created a counter-point, realigning Liberal rule of law rhetoric to the possible release of Meng.

And if “strong arguments” aren’t enough to get a court decision that delivers the deal, all is not lost. The final decision is political. New Justice Minister David Lametti must agree to an extradition. And if required, he can argue his decision was done based on high legal principles.

It’s all an inelegant solution and another haircut for Canada—still close-cropped from concessions to Trump on NAFTA and his continuing steel and aluminum tariffs.

And it gives no relief to other Canadians citizens who have been detained by China—for example Ti-Anna Wang, who, with her small child last week, was detained by Chinese authorities as she transited through Beijing airport from Seoul, switching to a Toronto-bound flight. In 2002, Wang’s father, a Chinese citizen despite many years in Canada, was seized in Vietnam and transported to China where he has since been imprisoned for espionage. Wang says her father is a pro-democracy activist.

In this three-party dance, a Canadian push for the end of U.S. tariffs and China’s harassment of Canadian citizens and their families could give a better deal. The leverage is that, as much as both China and the U.S. want Meng, it’s Canada that actually has her.

But there was an even better deal on offer. The Trudeau government missed it.

The stars in Trudeau’s eyes—and the dollar signs in the eyes of others—allowed China’s opaque business practices and human rights record to be ignored. Someone who says a “basic dictatorship” is something to admire will not produce a functional China policy that recognizes both China’s legitimacy and reality. It will produce exposure.

Exposure was ignored while tensions between the U.S. and China—and Huawei—kept rising. Amid an escalating trade war and fights over WTO status, a U.S. arrest warrant was issued on Aug. 22. Then in November, reports surfaced that the U.S. government had undertaken an “extraordinary outreach campaign” to allies in a bid to block Huawei.

If Freeland and Trudeau thought they were beyond reach, the shocking reality hit on Dec. 1. The very day Trump sat across the table from Chinese President Xi on the sidelines of the G20 summit in Argentina, Meng was arrested, giving Trump high leverage over both Freeland and Trudeau.

The better deal would have been no deal. No exposure. No hostages. No crisis. No losses.

Meng and her husband lived in Vancouver for years. She owns two expensive houses there. They travelled to Canada regularly. The better deal would have been to tell Meng, months ago, she was at risk in Canada. Leave.

Canadians may now forgive scrambling politicization and a thin rhetorical cover to get an exit deal. But they should not overlook the sacrifice of Canadian policy independence and the setback with China. Liberal hubris allowed the U.S. to place Canada in a conflict with China. Now, bullied from both sides, exiting is likely to require concessions to each.