The incredible miscalculation by Trudeau and co.

Stephen Maher: Trudeau and his inner circle turned a completely manageable concern into a scandal. And one of them will need to take the fall. 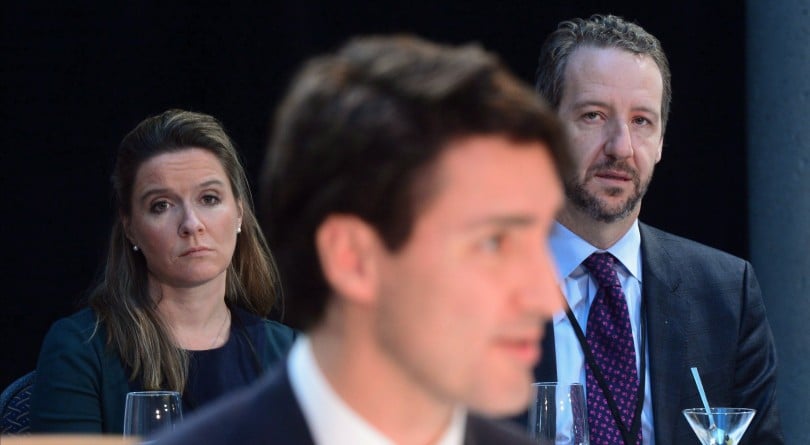 Telford and Butts look on as Trudeau delivers his opening remarks during the Meeting of First Ministers in Ottawa on Friday, Dec. 9, 2016. (THE CANADIAN PRESS/Sean Kilpatrick)

Former attorney general Peter MacKay told the Toronto Sun this week that the police should be called in to investigate the SNC-Lavalin affair, because someone may have obstructed justice.

“When I was prosecuting cases, if a politician had ever called me up, I would have put down the phone and called the police,” said MacKay, adding that we are in “uncharted waters.”

MacKay is right to warn about the danger of political intervention in a prosecution—although it is likely premature to call in the cops—but he is wrong to say that we are in uncharted waters.

When MacKay was a student at Acadia University, his father, Elmer, then solicitor general in Brian Mulroney’s cabinet, was demoted to revenue minister, just as Jody Wilson-Raybould was demoted to veterans affairs.

I don’t want to pick on Elmer, who is, I hope, at 82 enjoying his retirement in beautiful Pictou County, or on Peter, whose frequent appearances as a media commentator offer useful insights. But the story is a reminder that there is nothing new under the sun, and that the waters we are in are actually pretty well charted.

The difference is that MacKay was demoted for making a politically awkward intervention in a prosecution, while Wilson-Raybould was demoted after refusing to make such an intervention.

The elder MacKay met with the RCMP commissioner to discuss the Mounties’ investigation into New Brunswick Premier Richard Hatfield, a colourful figure known to jet down to New York to disco at Studio 54. The Mounties found marijuana in his luggage during a royal visit to Fredericton, and were considering charging him.

MacKay’s meeting with the top Mountie didn’t violate any rules, but it led to nasty questions in the House of Commons, with Liberal MP John Nunziata pressing the government and calling for a public inquiry.

To put such questions to rest, Mulroney moved Elmer out of the job and everyone lived more or less happily ever after.

It is not clear that everyone will live as happily ever after in this current case of a politically problematic intervention into a prosecution, for political, not legal reasons.

In 1985, MacKay was found not to have violated any laws because he didn’t apply pressure. He didn’t say to the commissioner, “Let Hatfield off the hook or else!”

We do not yet know if someone said something like that to Wilson-Raybould about SNC-Lavalin, but it is unlikely anyone would have been stupid enough to do that.

We will likely eventually know the truth, thanks to an investigation by the ethics commissioner, but it seems likeliest that Trudeau or his people told Wilson-Raybould that there were good political reasons—jobs and votes—to overrule the director of public prosecutions rather than letting her prosecute SNC-Lavalin for bribing Libyan officials.

Laying out that case is sleazy but legal.

On the other hand, someone may have said: “Do you like your job? It would be a shame if you lost it. You wouldn’t want to end up visiting Legion halls all the time, would you? Justin needs a new veterans affairs minister, you know. So, watch out. Pay attention to this file!”

Neither possibility can be summarily dismissed.

We know that the Liberals stealthily inserted a clause into a budget bill that made this kind of agreement possible, seemingly with a view to helping SNC-Lavalin, a company that made more than $100,000 in illegal campaign contributions to the Liberals, and we know that Trudeau demoted Wilson-Raybould after she declined to cut the firm a sweetheart deal, and replaced her with a Quebecer who would presumably be more likely to give SNC-Lavalin what it wants.

Still, it’s hard to know what really happened, unless you are a partisan, in which case it’s all crystal clear, depending on your inclination, and Trudeau is either a blameless and virtuous leader being hounded unfairly, or a profoundly corrupt leader finally revealed as the poltroon that he is.

Until we learn the facts, we can tentatively conclude that some of the smart people in the prime minister’s office are not as smart as they think they are.

Wilson-Raybould was unhappy with the government’s failure to deliver on Indigenous issues, and she cast doubt on the government’s commitment to reconciliation. The SNC-Lavalin matter gave her a cudgel with which to strike the PMO, delivering a meaningful blow for First Nations and writing her name in the history books.

Trudeau and his aides misjudged her badly by handing her the cudgel and then giving her the opportunity to wield it by demoting her as they did.

As Trudeau is a prince, born to power, she is a princess, daughter of hereditary Kwakiutl chief Bill Wilson, a lawyer and national leader who negotiated with Trudeau’s father to ensure Aboriginal rights were enshrined in the 1982 constitution. By demoting her, Trudeau and his people humiliated her, seemingly to send a message about who holds the reins in Ottawa: Trudeau, chief of staff Katie Telford and principal secretary Gerald Butts, two advisors who have more clout than any ministers.

It was an enormous miscalculation, and now Trudeau is locked in a zero-sum game with a formidable opponent who has undercut his argument that he is a feminist leader committed to reconciliation with indigenous Canadians.

The Elmer MacKay-Richard Hatfield matter is now a forgotten footnote. It did not profoundly damage the Mulroney government because MacKay remained a cherished member of the clan.

Wilson-Raybould more closely resembles Lucien Bouchard, who led a key part of Mulroney’s constituency away from him, ultimately ensuring his government’s defeat.

This is rattling Liberals, and will put pressure on Trudeau to get rid of Telford or Butts, who Liberal MPs resent for their historically unusual centrality to his government.

Trudeau likely shouldn’t get rid of them, because he wouldn’t be prime minister if it wasn’t for his unusually close working relationship with them. But the situation requires a fall guy, some kind of signal to Liberals and a tedious ongoing damage-control exercise that will follow Trudeau like a bad smell into the election.