The irony of the First Nations' vote

Pam Palmater: Here’s a hard truth about Canadian federal elections. When Indigenous peoples vote, they vote for their next oppressor. 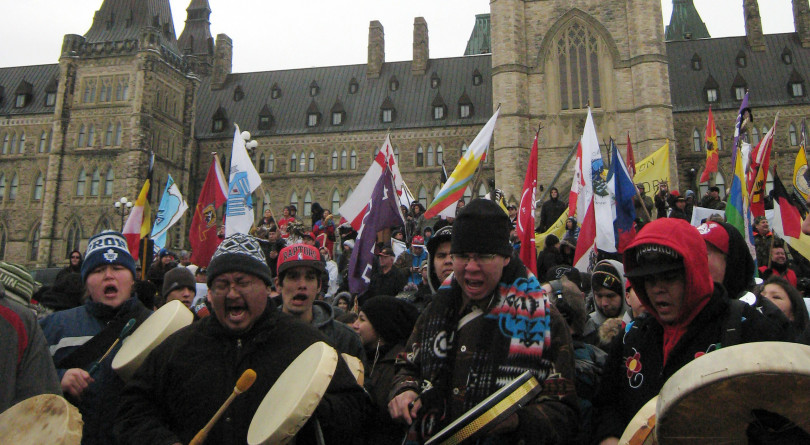 Voting in federal and political elections is considered by political scientists to be an important act of democracy, both a right and a responsibility of citizens. Election officials in Canada, be they federal, provincial or municipal, aim to get Canadians to the ballot box on election day. The core push being individual votes can make a difference.

But the same cannot be said of the First Nations’ vote. There is good reason why First Nations have traditionally resisted voting in Canadian elections. Regardless of who First Nations vote for in any federal election, their voice makes no actual difference.

The Canadian state has had the same “Indian policy” for decades, and each party pushes forward with the assimilation of First Nations, albeit with varying degrees of politeness.

The system in which First Nations find themselves, a system that has resulted in many decades of brutal colonization and genocide, is one that excludes them legally, politically and economically. It is a bitter irony to ask First Nations to vote in a governing system premised on their ongoing oppression.

Racism is deeply embedded in all of Canada’s laws, policies and practices, and no party has committed to the radical change necessary to end racism against First Nations in this country. In effect, when First Nations vote, they appoint their minister of Indian Affairs—the next person who will breach their Aboriginal, treaty and land rights, as well as deny them their basic human rights.

READ MORE: What the debate around Indigenous genocide says about Canada

The 2015 election saw a widespread increase in the numbers of First Nations voters. They came out in a collective effort to thrust former Conservative prime minister Stephen Harper out of office.

Harper’s Conservatives were one of the most aggressive and anti-First Nations governments in recent years; they often used the media as a weapon against First Nations, engaging in victim-blaming and racist stereotypes to vilify First Nations leaders. This caused divisions within First Nations communities and Canadian society as a whole. The Harper government was so adversarial toward First Nations that it inspired the nationwide Idle No More protest for Indigenous sovereignty, which started in spring 2012 and lasted for many months.

The Liberals’ 2015 election campaign, on the other hand, focused on making things right with Indigenous peoples. It represented a much-needed reprieve from Harper’s devastating funding cuts to social programs; his aggressive litigation; and his heavy-handed legislative suite that whittled away at First Nations’ rights.

Yet, as history has shown, there’s not much value in political promises. While Trudeau was elected in part by the massive Indigenous vote, he failed to deliver on the majority of his election promises to First Nations, like every other prime minister before him.

In fact, much like Harper, Trudeau imposed a suite of legislation on First Nations without their consent. He failed to act on the humanitarian crisis of First Nations children in foster care. (There have been seven non-compliance orders against his government, and children have died under his watch.) And he failed to take urgent action on genocide against Indigenous women and girls using the national inquiry as a stalling tactic (despite his government having promised not to do so).

RELATED: From ‘Aboriginal’ to ‘Indigenous’: Changing terms in the Trudeau era

In fairness, Trudeau did change the rhetoric regarding First Nations; he repeated the mantra that there is no relationship more important than the one with Indigenous peoples—a vast improvement from the Harper era.

But what did First Nations gain by voting in the 2015 election?

The concept of voting to ensure one’s voice is heard is, at least in theory, a positive act of democracy. I believe that the vast majority of Indigenous people who vote do so with the best of intentions. Here’s the hard truth: when Indigenous peoples vote, they vote for their next oppressor.

What is the core difference between past racist and aggressive governments, which didn’t give our lands back or respect our treaties, and the charming and positive Prime Minister Trudeau, who does exactly the same?

For a short time, we might see budget increases in program funding or a boost in the number of times the prime minister will meet with our leaders. But the multiple, over-lapping crises impacting First Nations as a result of Canada’s genocidal infrastructure of discriminatory laws, policies and practices, continue to worsen. Hence, the number of murdered and missing Indigenous women and girls, Indigenous children in foster care, Indigenous peoples who are in prison, poverty or homeless, continue to surge.

Voting in the same oppressive governance system has never changed that reality. Something much more profound is required: radical change based on a respect for First Nations as self-determining Nations, the return of their lands and resources and respect for their core human rights.

This may come from protests, public pressure, litigation or outside intervention at the United Nations level, but relying on voting condemns us all to an impoverished system of governance.