Andrew MacDougall: Misdirected or misfiring Liberal attacks are quickly becoming a thing in this unnecessary election, and it does not suit the party or the PM 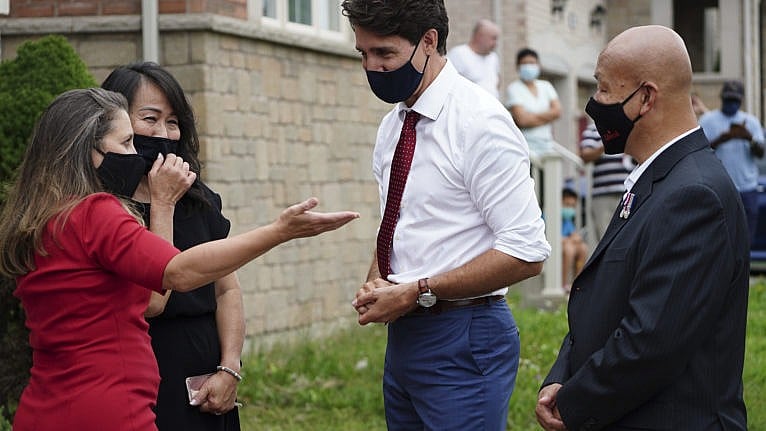 Chrystia Freeland got involved in politics to make history. Sure, the Rt. Hon. Kim Campbell might have gotten to the Prime Minister’s Office first, but until Freeland there had never been a female minister of finance. Think what you will of Freeland or the party she represents; she is now an historic figure.

It’s too bad, then, Freeland has now made another bit of history, this time of the less salubrious kind: being the first Canadian politician slapped down by Twitter for sharing  “manipulated media”, the sanction earned when Freeland shared a video of Conservative leader Erin O’Toole answering a question on health care that left the impression he was some great privatizer of Canada’s public health-care system. Only it turns out the clip Freeland briefed out to her followers left out the key moment where O’Toole confirms universal access to said system remains paramount. Given the fiscal inferno raging everywhere and Canada’s historic debts, a little video jiggery-pokery probably wasn’t the best use of the Finance Minister’s time.

Indeed, this was proven rather quickly, as within minutes of Freeland sharing her salvo the Liberal war room’s deception was laid bare when the poser of the original question supplied the complete context of O’Toole’s answer. That the Liberals tried to deflect from their deceit by reminding the world they had shared the full (and unedited) video later on did little to diminish the bruising inflicted by the media and opposition. What the Liberals thought was a dart turned out to be a boomerang smacking them right between the eyes.

It turns out misdirected or misfiring Liberal attacks are quickly becoming a thing in this unnecessary election. First it was Trudeau’s vaccine position for the public service which was, in fact, further from the public service’s than O’Toole’s, which was largely congruent with the public sector unions’ demands. And now there’s this case of Doctored Zhivago. They’re the kinds of mistakes winning campaigns don’t make.

Part of the Liberal incompetence on the attack stems from the fact they’re supposed to be the shiny happy people of Canadian politics. Gooning up like a fourth-line centre with no teeth is the other guys’ shtick. It also probably doesn’t help that a certain razor-sharp former campaign hand is posing as a (rather effective)  Cape Breton Tourist Board these days instead of working in the electoral salt mines (and who can blame him?).

Even worse for Trudeau, the Freeland-fronted gaffe comes after a lax opening week for his Liberals, which saw them drop down to within sniffing distance of Team O’Toole and their quick-release platform. The tightening race has led to a sequence of scripted attacks by A-listers like Freeland and several cabinet ministers who are closer to the other end of the alphabet, like Maryam Monsef and (checks notes) Mary Ng. Abortion, vaccines, private health care: the panic button gang’s all here!

The Prime Minister is even leading some of the attacks—notably against the Conservatives’ opposition to mandatory vaccines, and repeating Freeland’s half-cocked attack on the private delivery of health care, something the Prime Minister would be shocked to find out is happening on his watch.

No matter how much further Trudeau goes, he’s already a universe away from the ‘sunny ways’ of 2015. And it doesn’t suit him. Watching Trudeau out there on the 2021 campaign trail feels like watching ‘Evil Kirk’ from that bizarro episode of ‘Star Trek’ where each main character had an evil doppelganger (replete with dodgy facial hair). Strike that. It feels like watching Bambi get rabies.

Then again, we’ve seen flashes of a rabid Trudeau in the past. You know, like when the Prime Minister was in a ‘mood’ to ‘get something done’ by monkeying around in a criminal investigation or when he called Peter Kent—Peter Kent!—a ‘piece of –t’ in the House of Commons. The man’s got form.

Meanwhile, Erin O’Toole is touring the country advocating the treatment of addiction as a health-care issue, rather than a criminal one. And there O’Toole was today suggesting workers in federally-regulated sectors should have board representation if revenue is north of $100m or headcount above 1,000. Voters could be forgiven for thinking they’re in the bizarro Star Trek episode.

It will be interesting to watch the numbers as the Liberals go low. If things don’t perk up the party and Prime Minister might find themselves in a position where they have to destroy the little brand village they’ve created since 2015 in order to save it.