Andrew MacDougall: It's the ‘most important election since 1945’ and we’ve been reduced to the two main parties shouting about a problem Canada doesn’t have 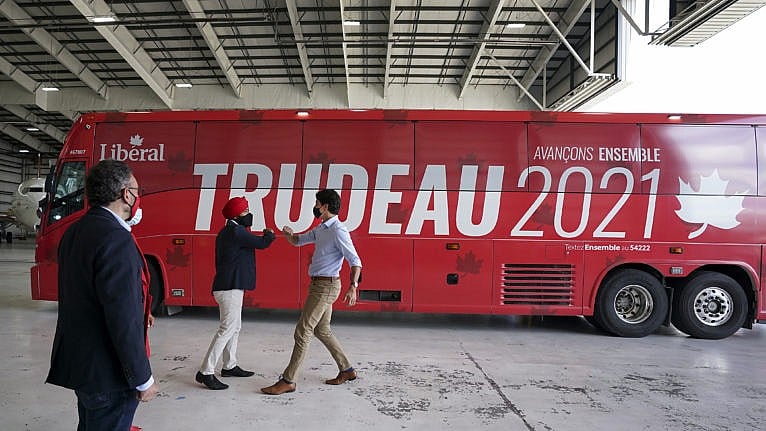 Trudeau greets MP candidates as he makes a campaign stop in an airplane hanger in Mississauga, Ont., on Sept. 3, 2021 (Nathan Denette/CP)

Given the Liberals kicked off the election without a platform or a ballot question, it’s unsurprising we’ve ended up somewhere nobody thought we’d be: discussing the merits of semi-automatic weapons.

Yes, you read that correctly. We’re three plus weeks into the ‘most important election since 1945’, one being held in the midst of some serious geopolitical instability and the fourth wave of a pandemic, and we’ve been reduced to the two main parties shouting about a problem Canada doesn’t have: gun violence perpetrated using guns other than handguns. Well done, all concerned.

We’re also, if you’re keeping score at home, a long way from the 1988 election (current holder of the title of most important election since 1945), which featured the Liberal Party warning that Brian Mulroney’s then Progressive Conservatives were going to erase the Canada-U.S. border and allow the True North Strong & Free to be subsumed into ‘Merica. Or something. Funny, then, that Justin Trudeau and his Liberals are now turning to star spangled strategy to save their listless campaign, namely: Buy American.

READ: 338Canada: The Liberals stop the bleeding, at least

By importing the U.S. abortion, gun and health care debates into Canada, Trudeau is hoping to resuscitate the ghost of Donald Trump just enough to frighten the natives into thinking that decent bloke Erin O’Toole they’ve been seeing on their idiot boxes or internets is actually a demon in disguise.

The evidence for this hypothesis is painfully thin. Which isn’t to say it’s non-existent. The Erin O’Toole who ran to be Conservative leader was certainly a bit harder than the current variant. And even though the actual O’Toole is closer to his current incarnation than his ‘True Blue’ one, it won’t stop the Liberals from branding him as something more sinister. Hey, that’s politics.

And to be fair, the Conservatives opened the door to these shenanigans by placing an item in their platform which pledged to scrap the Liberals’ 2020 order-in-council banning more than 1,500 gun models. If you want AR-15s in the hands of hunters you need to explain why. O’Toole’s problem is his ammunition on this front is being rendered unusable thanks to Liberal disingenuity and misdirection. Instead of worrying about the actual gun violence plaguing cities like Toronto, the Liberals would prefer to centre the debate on horrible exceptions like l’Ecole Polytechnique and last summer’s Nova Scotia shooting, both of whose perpetrators used weapons on O’Toole unbanned list.

But as Kim Campbell was famously misquoted as not saying, elections are no time to discuss serious issues. Or, in this case, no time to discuss minor issues seriously. The Liberals are playing on a very strong Canadian heuristic: guns are bad. It doesn’t matter that the Canadian hunters and sports shooters who have the weapons in question go through a very thorough vetting process and are almost universally responsible with them, or that their weapons very rarely end up being used in crime. All the Liberals know is that when these weapons are used in a crime, it’s unspeakably awful.

If Canada wanted to have a serious debate about gun crime it would focus squarely on the types of weapons causing havoc in major cities and the routes those weapons take into the hands of criminals. Anything else is a distraction. Whether Trudeau likes it or not, gun crime has gone up under his watch, and it’s gone up as his Ministers of Justice have set about lowering the penalties for gun crime. It’s something voters might care about, if they ever got to hear about it.

O’Toole’s recent reversal has probably done enough to dampen the debate on guns. Moreover, the classification system in Canada is in need of some clarification. But O’Toole’s cauterization has come at a cost, one the Liberals will now try to make steeper by importing other U.S. issues, namely abortion. With the debates coming up, Trudeau will come at O’Toole all guns blazing (sorry) and the rookie leader had better be ready to parry more effectively than he has to date.

Most of all, the Conservatives need to get the focus back on the unnecessary nature of this election and back on their plan to help with jobs, housing and the cost of living. This is where the voters are open to new ideas, and most likely to ignore anyone who tries to counter such talk with the debates of the past.