The need for protest

David Moscrop: When resistance to the current order arises, citizens are put to the test. We are forced to reveal our allegiances. What do we think is right and just? 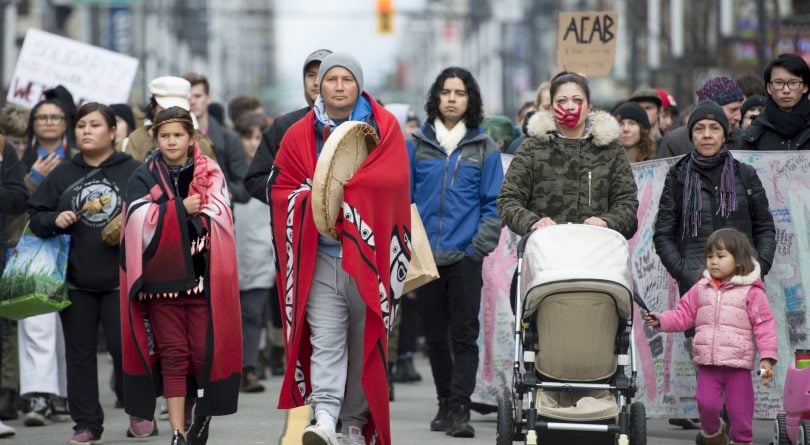 Protesters walk down Granville Street in downtown Vancouver on Feb. 12, 2020. The protesters are standing in solidarity with the Wet'suwet'en hereditary chiefs opposed to the LNG pipeline in northern British Columbia. (Jonathan Hayward/CP)

As acts of protest and civil disobedience in solidarity with the Wet’suwet’en land defenders cascade throughout Canada, the nation’s fainting couches are straining under the weight of so many concerned citizens and commentators who see these actions as unconscionable and dangerous threats to the rule of law. Responses critical of the resistance express worry about disruption: to the market, to order, to the smooth and privileged and unencumbered day-to-day lives we expect to live. Protest is meant to disrupt.

Liberal democracy asks next to nothing of those governed by its light touch. Citizens are asked to pay their taxes. They do so, more or less, griping as they remit them, unless they can weasel out as corporations routinely do. Citizens are asked to present themselves for jury duty, if summoned. But most people will never have to do so. Citizens are asked to take a little time to cast a ballot every few years. Two-thirds or so do that. Beyond these boundaries, individuals are free to give back as much or as little as they please to their community and they are left alone to ignore the imperatives of self-government.

MORE: The curious incident of the American mass protest

When resistance to the current order arises, citizens are put to the test. We are forced to reveal where our allegiances lie. What are we willing to support, or do, in the pursuit of rightness and justice? In the case of the Wet’suwet’en resistance to the Coastal Gaslink project, those who are blockading road and rail, preventing politicians from entering the B.C. legislature and other buildings, and those supporting them on air and online are calling public attention to the tensions, disjunctures, contradictions and injustices of a colonial system of governance. That system has been thrust upon Indigenous peoples; so too has the violence of a market and political orthodoxy that says energy projects will only go through with consent, while implicitly assuming and expecting that consent—even through unceded land, so much of which covers B.C.—from hereditary chiefs. It’s a put-up job.

The Angus Reid Institute reports that a mere two-in-five people support the protesters. People are worried about violence and disruption. Some think the efforts are pointless. In 1963, Americans were asked what they thought of Martin Luther King’s march on Washington. Sixty percent of them “had an unfavourable view of the march, stating that they felt it would cause violence and would not accomplish anything.” In Canada, the public has long had mixed feelings about—and, at times, thuggish and violent counter-reaction to—acts of resistance: the Red River Rebellion; the Winnipeg general strike; the Oka Crisis; Idle No More; even last summer’s climate marches. Looking back, opinions can and do shift, just as acts of resistance can—and do—lead to change. Meanwhile, history judges us.

At times, change is the product of a majority popular opinion filtering through to political action. At other times, it’s the product of elite action, whether by grace of noblesse oblige, enlightened concern, self-interested hackery, corporate influence, or court order. And then, sometimes, change comes through direct action by a minority of people agitating for what they think is right and just, even if it means some of their actions—such as acts of civil disobedience—lead to legal sanctions.

Justice and law are not the same thing. That which is legal is not necessarily just. And illegal actions can be done in the name of justice. Sometimes, change must happen through people throwing themselves against and beyond the boundaries of the law, pushing those limits beyond what is legal towards what they believe is just. That process will be discomfiting and disruptive. So be it.

Democracy itself wouldn’t exist without those who put themselves on the line for what they believed to be just and necessary—even against the constraints of elite orthodoxy and the common popular imagination. Today, once more, we need those who ask us to be and do better. Whether Canadians support them in the moment is beside the point; someday, others will. In the meantime, the avenue of change for those who walk with the Wet’suwet’en must pass through the roads and rails and anger of those unconvinced by the struggle for justice. But eventually, one way or another, they will get to where they’re headed.